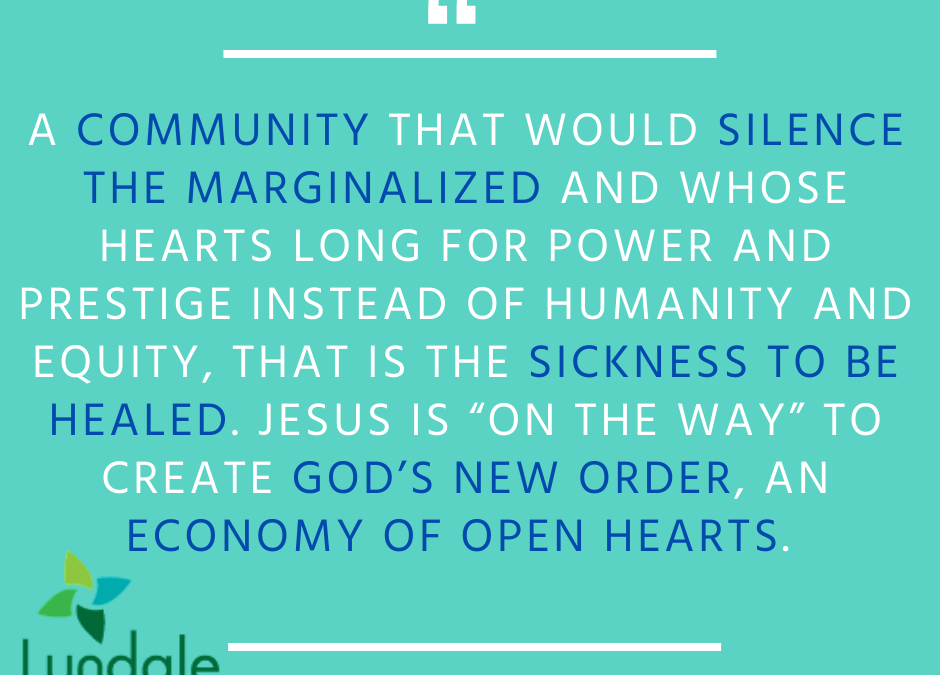 My friend, Caitlin Breedlove is a first-generation immigrant from Central Europe. When she was a teenager, she went back to Prague for an extended period of time. One day, she was out with her friends and they came upon someone asking for money. Caitlin didn’t even stop, she just kept walking. After giving the person some money, her friends ran up to her and were very angry. They asked her what she had learned growing up in the United States that she would walk by someone asking for money and not stop or even acknowledge the person. They told her that they were very disappointed in her and that her heart had been hardened and that she had better pay attention to it or it would make her sick.

They came to Jericho. As he and his disciples and a large crowd were leaving Jericho, Bartimaeus son of Timaeus, a blind beggar, was sitting by the roadside.  When he heard that it was Jesus of Nazareth, he began to shout out and say, “Jesus, Son of David, have mercy on me!” Many sternly ordered him to be quiet, but he cried out even more loudly, “Son of David, have mercy on me!” Jesus stood still and said, “Call him here.” And they called the blind man, saying to him, “Take heart; get up, he is calling you.”  So throwing off his cloak, he sprang up and came to Jesus. Then Jesus said to him, “What do you want me to do for you?” The blind man said to him, “My teacher, let me see again.”  Jesus said to him, “Go; your faith has made you well.” Immediately he regained his sight and followed him on the way.

There is a lot to say about our text and I will share a number of things, but I want us to continue to consider it all through the lens of the state of our hearts. So, hold on to that…

But first, let me set some context for this story.

Our text for this morning is set on the way out of Jericho. Now, Jericho is the final stop on the pilgrimage road. Jewish pilgrims who are on their way to the Temple in Jerusalem only have fifteen more miles on their pilgrimage. In other words, they are almost to the center of political, economic and religious life. But there’s another piece about geography that the writer of the Gospel of Mark uses. Throughout the story of Jesus, Mark tells us that Jesus is “on the way.” And, in many ways, Mark’s gospel can be seen as Jesus and the disciples’ journey from the hinterlands, ministering amongst those who are marginalized, and journeying toward a confrontation with those in power. Each healing is a step closer to the final confrontation to which he is “on the way.” So, the geography of the story is important.

Second, the placement of this story in the arc of the gospel is also important. The story right before our reading for this morning has James and John, two brothers, saying to Jesus, “grant us to sit, one at your right hand and one at your left, in your glory.” And Jesus, clearly disappointed by them, flatly refuses. And he calls all the disciples over to him and says, “You know that among the Gentiles those whom they recognize as their rulers lord it over them, and their great ones are tyrants over them. But it cannot be like that with you. Anyone among you who aspires to greatness must serve the rest; whoever wants to rank first among you must serve the needs of all.”

Our story of Bartimaeus and Jesus follows this rebuke of James and John and it is the final healing in the gospel of Mark. The juxtaposition of Bartimaeus and James and John is pretty stark. And then, with both the rebuke of the brothers and the healing of Bartimaeus fresh in our minds, the next scene in Mark’s gospel is Jesus entering Jerusalem, his last step “on the way” toward his final confrontation. It is known as Jesus’ triumphal entry into Jerusalem and it’s the text that we read for Palm Sunday.

This geographic context and the placement in the larger story are both important to help us get a better understanding of what the writer of Mark is trying to teach us.

As Jesus is on his journey “on the way,” who is he rebuking and who is he healing?

Bartimaeus is similar to many of those with whom Mark’s Jesus ministers. Bartimaeus is an outsider who doesn’t have friends to assist him. He is pushed to the margins of society. Yet he takes bold initiative and is commended by Jesus, “your faith has made you well.” Bartimaeus reminds us of the unnamed woman with the flow of blood and the many other outsiders in Mark’s gospel who are received or empowered by Jesus- the Gerasene demoniac, the Syrophoenician woman, the blind man at Bethsaida and the little children. These are the ones who receive Jesus’ attention, these are the ones whose agency Jesus responds to and heals.

But like other stories of healing in Mark’s gospel, the story of Bartimaeus makes us reconsider who is sick and who actually needs healing.

Which brings me back to the state of our hearts.

My friend Caitlin who was rebuked by her friends in Prague shared her story in the context of her work as a white woman in movements for racial and economic justice. She told her story in the basement of Plymouth Congregational Church with kindred from First Congregational, Lyndale and other historically and predominantly white churches. And she told it as an example of what she sees as one of our biggest problems in the United States: heart sickness. Because we have lived for generations amidst systems that dehumanize some and claim others as superior, our hearts have hardened, atrophied. And our hard-heartedness makes us long for and desire the wrong things. It damages our heart’s eyes and obscures our vision.

What is the state of our hearts?

When Bartimaeus realizes that it is Jesus who is near him he yells and shouts “Jesus, Son of David, have mercy on me!” And then the text tells us “Many sternly ordered him to be quiet.”

Who were these folx seeking to silence Bartimaeus? Were they the disciples who, just moments before, Jesus had rebuked and told them of the radical equity in God’s realm? Were they pilgrims on their way to Jerusalem? Whoever they were, they seemed to be suffering from the same hard-heartedness that Caitlin’s friends were so concerned about.

The story goes on describing Bartimaeus, but he cried out even more loudly, “Son of David, have mercy on me!” Jesus stood still and said, “Call him here.” And they called the blind man, saying to him, “Take heart; get up, he is calling you.”  So throwing off his cloak, he sprang up and came to Jesus.

Scholars have pointed out that unlike James and John who, in their heart-sickness, are longing after power, Bartimaeus throws off his cloak, his only means of income, to come to Jesus. The faith that Jesus tells him has made him well, is a clearness of heart. Bartimaeus understands that which will make him whole. And as further evidence of this, Bartimaeus, after receiving his sight, remains with Jesus “on the way.” He allows himself to stay open-hearted and commits to join the journey toward confronting the political, religious and economic systems that harden too many hearts.

I want to say just a word about disability and ableism. Clearly in this story, it is Bartimaeus’ marginalization, his isolation from community that is named as the problem. Jesus respects Bartimaeus’ agency and his desire to receive his sight but Bartimaeus’ blindness is not the problem. A community that would silence the marginalized and whose hearts long for power and prestige instead of humanity and equity, that is the sickness to be healed. Jesus is “on the way” to create God’s new order, an economy of open hearts.

To emphasize the point that Bartimaeus is not the one who needs to be healed, his crying out “Jesus, Son of David” is the first time in the Gospel of Mark that Jesus is named as in a lineage of rulers. But, clearly Bartimaeus sees and understands that Jesus’ embodiment of power is for soft-hearted liberation, not economies of hard-heartedness.

So what is the state of your heart right now?

I know for myself the temptation in this moment, nineteen months into Covid, sixteen months after George Floyd’s murder, the temptation is to close off my heart—mostly to protect it. But the problem with protecting our hearts, especially in a country where hard-heartedness is often a kind of cultural heirloom, is that protecting our hearts too often leads to heart-sickness and hardening.

Can we give our hearts the attention they need? Can we hear the challenge from Bartimaeus and Caitlin’s friends?

And hearing these, can we cry out, “Jesus, soft-hearted liberator, have mercy on us?” And might we hear, “come, your faith has made you well?”