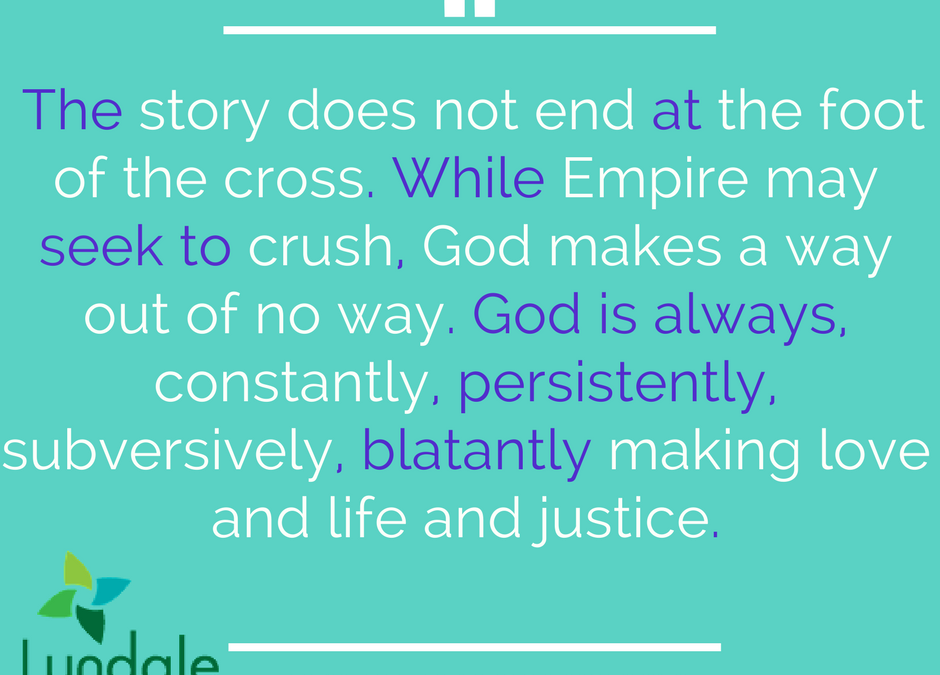 O unfamiliar God,
we seek you in the places
you have already left,
and fail to see you
even when you stand before us.
Grant us so to recognize your strangeness
that we need not cling to our familiar grief,
but may be freed to proclaim resurrection
in the name of the One whom death could not hold.
Amen. 1

This year Lent and Holy Week have been particularly… I’m not sure what the right word is… Poignant? Timely? Descriptive?

It feels like the story of One whose ministry happens amidst Empire’s occupation is very current.

It seems as if the narrative of One who seeks a kind of deep, intimate and vulnerable community that both threatens and is mocked as naïve by the Powers-That-Be could be ripped from the headlines.

It appears as if the passion of this kind of leader, who is arrested by the State, tortured and executed, because he is proclaiming a transformative way of being, a Kin-dom of love and justice, could be reported on CNN as easily as read from the gospels.

And then, on Ash Wednesday no less, the word came that seventeen people, most of them children, had been killed in a school shooting at Marjory Stoneman Douglass High School. Still reeling, we placed ashes on our foreheads amidst the renewed pain of gun massacres that are coming with greater and greater frequency.

And as we sat at table this Maundy Thursday, I wept as I looked around. And I cried as we sang, Won’t You Let Me Be Your Servant, together in beautiful harmony and as we heard the words, “On the night before he was killed by those who feared him, Jesus sat at table with his friends…” Then, as now, small groups of people have sought to follow the One of Peace-and-Justice in simple and profound ways.

And on Good Friday, we walked from station to station—each with a picture of Jesus’ Way of the Cross paired with a contemporary image of all the crucifixions of today: “Jesus is condemned” next to the tiki-torch-lit faces of angry white supremacists carrying the symbols of Nazis and chanting Holocaust slogans…

“Jesus Falls” next to the Border Patrol agent, with a smirk on his face, pouring out the water that had been left in the desert to keep refugees and migrants from dying of thirst…

“Jesus is stripped” next to the eight-year-old and eleven-year-old and the twelve-year-old who were all bullied and, despondent, took their own lives.

The Lenten journey has felt searingly poignant, timely and descriptive of the pain and anger we are living amidst. The story of Empire’s death-dealing and violence, and the hatred and anger it calls forth in us is both old and new.

But ours is a tradition that teaches that the story does not end at the foot of the cross. Ours is a faith that proclaims that, while Empire may seek to crush, our God is a God who makes a way out of no way. Our God is a God who is always, constantly, persistently, subversively, blatantly making love and life and justice.

But Mary stood weeping outside the tomb. As she wept, she bent over to look into the tomb; and she saw two angels in white, sitting where the body of Jesus had been lying, one at the head and the other at the feet. 13 They said to her, “Woman, why are you weeping?” She said to them, “They have taken away my Lord, and I do not know where they have laid him.”  When she had said this, she turned around and saw Jesus standing there, but she did not know that it was Jesus.  Jesus said to her, “Woman, why are you weeping? Whom are you looking for?” Supposing him to be the gardener, she said to him, “Sir, if you have carried him away, tell me where you have laid him, and I will take him away.”  Jesus said to her, “Mary!” She turned and said to him in Hebrew, “Rabbouni!” (which means Teacher).

Sometimes the resurrection comes as quickly as the recognition of your own name spoken by your beloved.

It had been five months since his beloved had died. And the world was still clad in gray-tones. Food didn’t have much taste and he went through most days in rote routine. His chest felt tight all the time. As Memorial Day approached, he knew he would be invited for the annual trip to the Olympic Peninsula with his friends. And he couldn’t muster the energy to resist.

As they arrived at the remote parking lot and got out of the car, the the aroma of the pines seemed to break through—a deep green amidst the gray—and he looked up. It was as if he was in a cathedral of old growth and wisdom and a quiet certainty of life. He took the first deep breath in months and blue was added to the green amidst the gray-scale. As they walked, he could feel each step being gently held by the bed of needles that gave the slightest spring. And as they got closer to the ocean, he found himself drawn to stop. There, amidst the tall, giant pines, lay one that had fallen, perhaps years ago. The outline of its trunk was slowly rotting away. Its death an obvious fact. But what caught his attention was something he knew but had forgotten. Coming out from within the fallen tree, were at least a dozen small seedlings. In death, this tree was a nurse log.

Sometimes resurrection is gradual, hidden as decay until a small sprout begins its hundreds-year long journey toward the sun. Or gradual like the rote practice of living until the trees can begin to breathe life amidst grief.

The same children who had been attacked on Ash Wednesday and lost seventeen members of their community organized one of the largest, most intersectional marches in our country’s history. On the day before Palm Sunday, a week before Passover, this group of queer, straight, white, Latinx, Black, Jewish, Christian, Muslim students said, “No” not only to the death of their classmates and teachers but “No” to the crushing logic of gun violence. Each and every one of the speakers at the march in DC was an inspiration. But I was particularly moved by the presence of Yolanda Renee King, Martin Luther King’s nine-year-old granddaughter, who stood in the same city as her grandfather and proclaimed her own dream: “Enough is Enough.”

Sometimes resurrection takes generations to come. Sometimes it is woven into our DNA like a recessive gene and emerges in due time, exactly when we need it most, to speak the truth we long to hear.

My friends, our Lenten journey has been searingly apt, that is for sure. And the crucifixions of Empire, oppression, grief, violence and fear—in our own lives and in the life of our nation and world—are painfully real.

But we never walk through Lent alone, God walks with us. We never encounter the death-dealing of Empire unaccompanied, God goes before us. We never experience suffering and grief and death unassisted, God has already been there.

And in it all, God is calling our names and making nurse logs and nurturing a child to declare that life and Love and justice…. are always the most real thing in God’s universe.