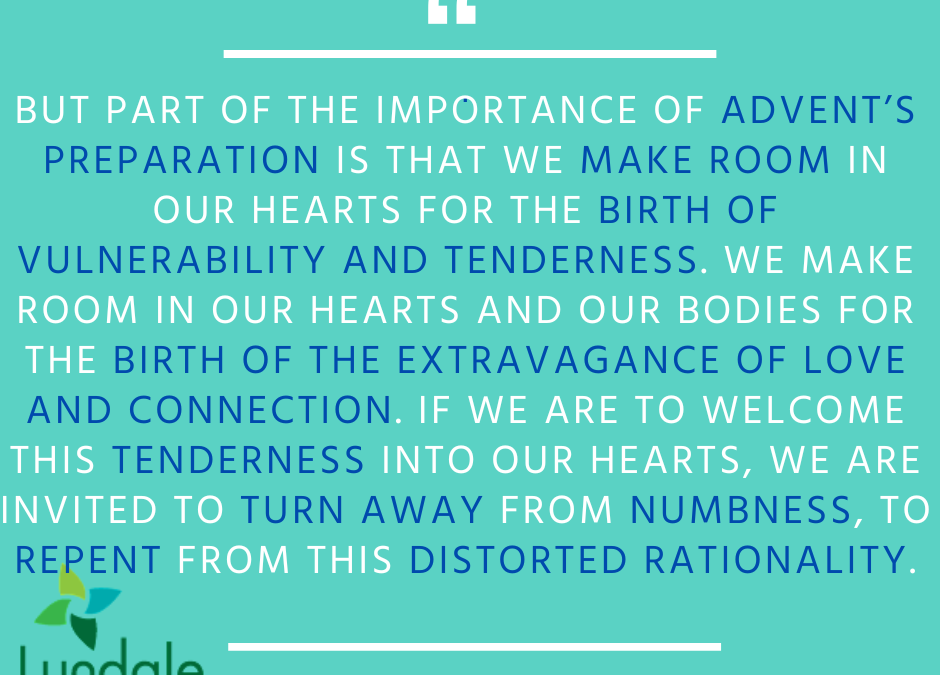 When true simplicity is gained to bow and to bend, we shan’t be ashamed to turn, turn will be our delight til by turning, turning we come round right. Amen.

When I was in high school, my mom and I were walking toward the Post Office in Oak Park, IL around this time of year, when a man ran up to me, put his hand on my forehead and pushed me back just a bit as he said, “I rebuke you in the name of Jesus Christ.”

I have no idea who that man was or what he saw in me. But I do have an idea of what made him think he had the right to do that to me. His actions reflect a kind of toxic Christianity that is rooted in a certainty of a binary-filled world. There is right and wrong, good and evil, sin and salvation, dominance and submission, male and female, light and dark… the list goes on.

Unfortunately for me, when I hear the word “repent” in our biblical text for today, it is through the slime of this kind of colonized, toxic Christianity that it comes to me. Repentance has been poisoned and become a word to be resisted and rejected because of how sullied it has become on the lips and in the lives of the followers of toxic Christianity.

From many conversations I’ve had with many of you, I suspect you have the same resistance and desire to reject the word “repentance” when you hear it, too.

But today, on this Second Sunday of Advent, I’d like to invite you to journey with me a bit as we explore what blessing repentance might have for us.

I would like to suggest that there are two things about repentance that can help us to reclaim its importance as a spiritual discipline. The first is orientation and the second is turning or re-orienting.

With these two things in mind, we ask ourselves two key questions: To what are we oriented that is not healthy or good: for us, for one another, and for all our relatives in the cosmos? And, how can we turn our focus and attention away from what is not healthy and toward that which is life-giving for ourselves, one another and all our relatives in the cosmos?

The placement of John the Baptizer calling out for repentance in this second week of Advent is very important because it suggests that we may have some re-orienting to do if we are going to be able to welcome the Christ child in our midst. We may have some turning away from an unhealthy or death-dealing focus and turning toward something new in order to approach the manger and receive the gift of Emmanuel, God-with-Us.

What do I mean by this?

Mary Boykin Chesnut was married to a man who served in Confederate President Jefferson Davis’ cabinet and she was a passionate supporter of the Confederate cause. In her diaries, however, she articulates the psychological and spiritual impact of slavery on her. Upon witnessing a slave auction, she reports the “tragedy” she observed, saying,

A mad woman taken from her husband and children. Of course she was mad, or she would not have given her grief words in that public place. Her keepers were along. What she said was rational enough, pathetic at times, at times heart-rending. It excited me so I quietly took opium. It enabled me to retain every particle of mind or sense or brains I have, so quiets my nerves that I can calmly reason and take rational views of things otherwise maddening. 1

This passage is haunting to me because it so powerfully shows the price of being oriented toward the theology of white supremacy. Mary felt empathy. She felt the pain of the woman who, in grief, cried out against the brutality of family separation. Mary was connected to her, letting it rend her heart. But Mary couldn’t stay in that place of connection and empathy. Her orientation to the theology of slavery and supremacy compelled her to take opium in order to numb out. And in numbing out, she was able to realign herself with the “rationality” of supremacy and disconnection.

Taking opium is an extreme example, but the impulse to numb out, to disconnect, to withdraw from one another strikes me as a practice that far too many of us engage today. Ours isn’t Roman and it isn’t the Confederacy, but we also live amidst Empire today. And the lure of the “rationality” of supremacy and disconnection remains strong.

We have been reading from Dietrich Bonhoeffer’s The Mystery of Holy Night in Adult Ed during Advent. For Bonhoeffer, the manger and the cross are interwoven events. And the heart of both is what some call “the foolishness of the cross” that defies the wisdom of much of society. In the time of the Roman Empire whose orientation was strength, military might, conquering, colonizing as much territory and as many peoples as possible, God chooses to be born in a backwater town of little or no political importance to an unwed mother whose lineage is of the conquered. This God in Jesus then lives his whole life in backwater places, ministering to the nobodies of the time, building a community of authenticity and connection. When he finally journeys to the seat of power, it is to upend the tables of injustice. And for this, he is captured and executed as a political victim of the Empire.

As we prepare for the birth of this God in our lives, we are invited to turn away from an orientation on strength, prestige, social recognition and might. If we don’t, we might find ourselves with the religious leaders whom John rebukes. We might find ourselves on the side of the Empire who crucifies Jesus.

As I think back about the man by the Oak Park Post Office that day, I’m aware that that incident happened right around the time I was first coming out to myself as lesbian and pushing the thought as deep down as possible. In retrospect, I wonder if that man’s rebuke, however it was intended by him, wasn’t a sacred nudge about my orientation. It would take another four of five years before I made the turn. But that turning, turning has, indeed, allowed me to come round right. Amen.