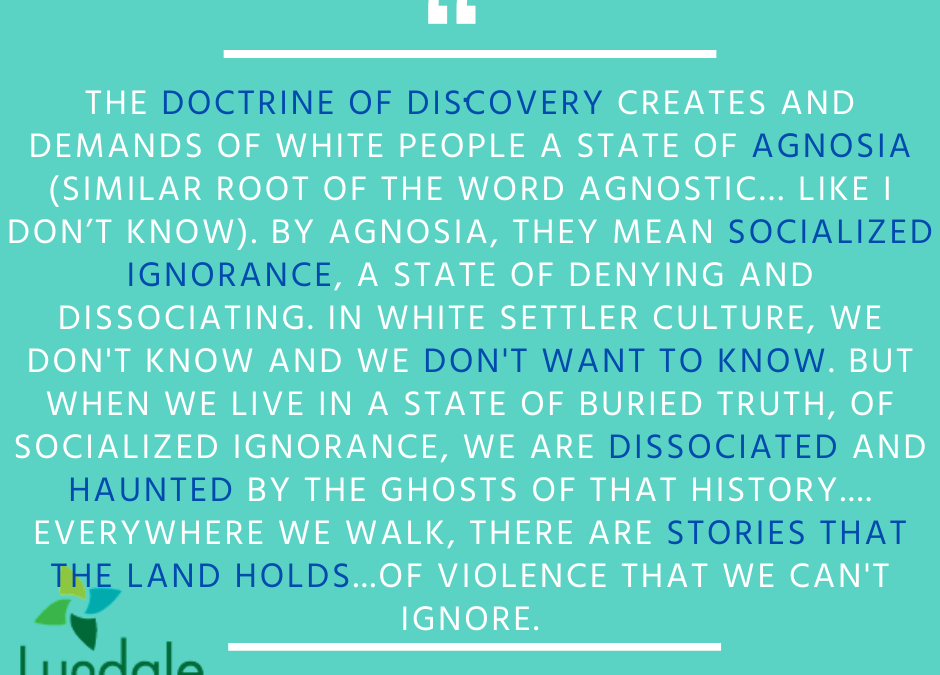 The Lone Wild Bird in lofty flight is still with Thee, nor leaves Thy Sight. And I am Thine, I rest in Thee, Great Spirit come and rest in me.

I want to begin by saying again how grateful I am for the time of sabbatical that Lyndale granted me. It will take me many more sermons and writing to explore all that I’ve learned this summer, particularly as I’ve worked on the Louisville Institute grant on reparations. But know I return thanks to God for Lyndale and all this community is. Thank you.

Besides the grant work, my sabbatical also included a month-long trip in which Maggie and Shannon and I spent time in Ireland and Scotland on our ancestral lands, exploring our histories. As I read about the interaction between Jesus and the ten people with leprosy, I was struck by the importance of truth-telling for the process of healing.

Truth-telling for the process of healing. What do I mean by that?

Maren Tirabassi recently wrote a reader’s theatre piece about the story of Jesus and the ten people with leprosy in which she explores why the nine people didn’t turn back. In her exegesis, many of those whom Jesus healed don’t turn back and thank Jesus because they wanted to bury the past. They wanted to cover up the memory.  They wanted to forget what happened to them.

When we were in Scotland in August, the primary task was to inter the ashes of my grammie’s younger sister, Christina MacKenzie Russell. There is a family plot in the Tomnahurich Cemetery in Inverness where my great grandmother, Jessie Johnstone MacKenzie and some of her children are buried and since my Aunt Chris died in 2006, I’ve been holding her ashes until they could make their way home. We were able to bury her there on August 26th.

On the 28th, we took a trip north of Inverness, through what is known as Ross and Cromarty. Now, I’ve never spent time in Ross and Cromarty, but I’ve certainly known about it and I’ve talked about it with my cousin’s wife, whose name is Jan Cromartie-Voelkel. So when we were in Scotland and in Ross and Cromarty, I texted Jan to let her know. Just after I texted her, our tour stopped at Dunrobin Castle, ancestral home of the Earl of Sutherland. As we pulled up, our driver suggested that this was Scotland’s answer to Disney. And he wasn’t kidding. The towers and the estate looked as if they could have been the model for the Disney logo. The wealth and opulence were overwhelming, so much so that all three of us took the short cut to the exit.

As the bus pulled away from Dunrobin, our tour guide then shared with us that it was the Earl of Sutherland who, in 1831, had decided that the 1500 families who lived in Ross and Cromarty weren’t making him enough money and that he wanted to have sheep instead. He decided to clear the families off the land. Many of them, he tricked into going to a port near Dunrobin where he had several ships onto which he loaded them and sent them off to North Carolina.

Our tour then stopped at the statue whose picture is on the cover of your bulletin which was put up by the Highland Clearances Commission. In it, one of the 1500 families that was cleared off the land is pictured, starving and desperate as they are forced out of their country.

Right after I took that picture and got back on the bus, a text came from my cousin, Jan Cromartie-Voelkel. Oh, yes, she said. The white family that owned her ancestors in North Carolina were Cromarties but when she wrote them to ask about her people who they had enslaved, they didn’t write her back.

When I read Jan’s text to Maggie and Shannon, we could hardly take it all in. How could people who experienced the brutality of being dehumanized, cleared off their ancestral land in order to be replaced by livestock, starved and lied to, shipped to another country all in the name of greed, turn around and own other human beings?

Did the process of burying the past happen right away? Did those families from Ross and Cromarty change the spelling and pronunciation of their name right away? Did they start lying about their past when they got off the boat, or did it take a while?

A couple of weeks ago, Lyn Pegg, Nancie Hamlett, Jonathan Stegall, Craig Simenson, Pam Meyerhoff and I attended a book reading at First Nations Kitchen with Elaine Enns and Ched Myers of their book, Healing Haunted Histories: A Settler Discipleship of Decolonization. It was a powerful evening and there were many things that moved me.

In particular, they argue that the Doctrine of Discovery creates and demands of white people a state of agnosia (similar root of the word agnostic… like I don’t know). By agnosia, they mean socialized ignorance, a state of denying and dissociating. In white settler culture, we don’t know and we don’t want to know. But when we live in a state of buried truth, of socialized ignorance, we are dissociated and haunted by the ghosts of that history….everywhere we walk, there are stories that the land holds…of violence that we can’t ignore.

When the tenth person who’s been healed of leprosy turns back and thanks Jesus, the act of turning back is rooted in acknowledging his history. He owns the truth about who he is and where he comes from. While all the others are healed in body, he is able to be healed in heart and soul as well as body because he, first, acknowledges the truth of all that’s happened to him. And in owning the truth, he is released into gratitude.

One of the people I interviewed over my sabbatical was Macky Alston, a documentary filmmaker who’s just finishing a film on reparations that focuses on his mother’s family who were enslavers in Georgia. I asked him a lot about what drew him into making this film and about working on reparations in general. And one of the first stories he told me was about when he came out to his parents after they had moved from Georgia to New Jersey. Their reaction was a lukewarm, well that’s OK, but you must never tell your grandparents because it will kill them.

Macky paused and said, “they literally were saying that the truth would annihilate my grandparents. And I think that’s the fear in all this reparation work, too. That the truth about our pasts will annihilate us.”

But, he went on to say. “At some point, I chose to ignore my parents fears and I went to Georgia and came to my mamaw and she was not only unfazed but celebrated me. And I learned that, in fact, the truth could, indeed, set you free.”

My friends, we live in a world where buried truths haunt us- individually and collectively. Our pains and traumas fester when they are covered up. And we can lash out and perpetrate the very trauma that was visited on us. As Bishop Yvette Flunder often says, “hurt people hurt people. And healing people help heal people.”

When Jesus greets the tenth person who tells the truth about his past and is released to gratitude, he says, go… your faith has healed you. What healings do we need? What truths are we invited to name so that we might be released into gratitude and healing? What faithfulness are we being called to?

Today we will partake at the communion table, like we do every month. And each time we consecrate the bread and the cup, we repeat the words from scripture, Do This in Remembrance of Me. Truth-speaking and memory are sacred and holy things. They are the first step toward healing and liberation.