The Peace that Love Offers 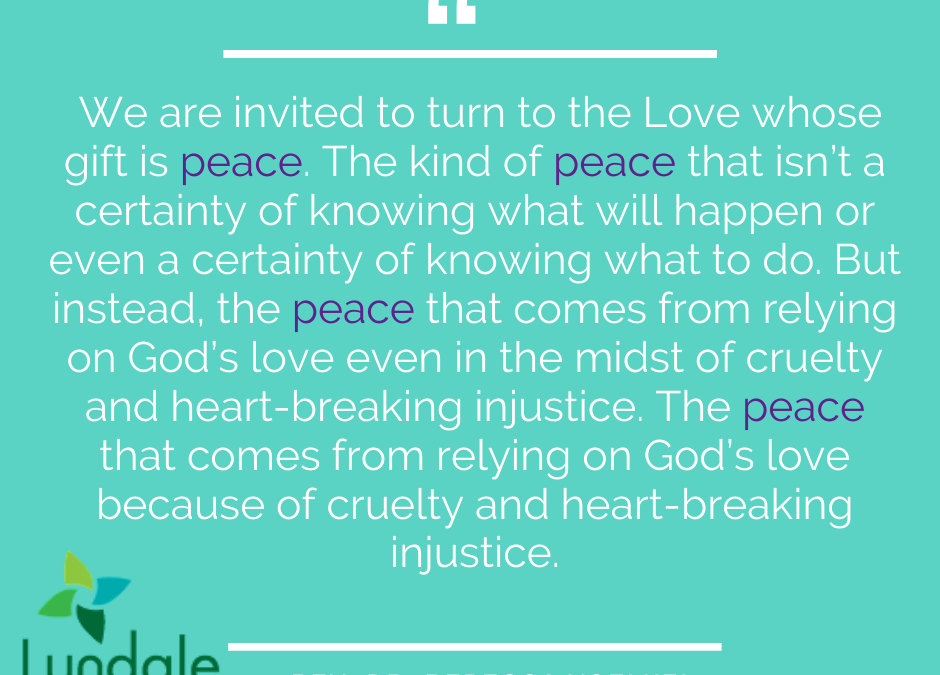 O Come, O Come, Emmanuel and ransom captive Israel that mourns in lonely exile here…. Until the Child of God appear. Rejoice, rejoice, Emmanuel, shall come to you, O Israel.

Sometimes when there is a prescribed season of the church (like Advent or Lent), I have to get myself into the right mindset or framework because it just doesn’t match what I’m feeling or experiencing. Or sometimes I read an assigned scripture for the day and think, what does that have to do with my life or ours?

The yearning, the longing, the waiting for love to be born amidst a world that seems to have gone mad…. The persistent search for peace amidst the madness and waiting… it all seems to have been written for this moment.

And then this Scripture and this contemporary reading. It just feels like John the Baptist is speaking directly to us and these times…

Matthew shows us a John the Baptist dressed in the clothing of the prophets (camel hair tied with a leather belt) and eating locusts and wild honey in order to give people all the visual and cultural cues of the prophetic tradition. Something is radically wrong, John is proclaiming.

His people are occupied by the Roman Empire—with its military and its tax plan, with its sexual violence and conquest. And far too many religious leaders are corrupted by their colluding ways. Things feel apocalyptic, with things they hold dear being destroyed.

Repent, John pleads. Turn away from the Empire, he demands. Find a way to cleanse yourself of all this toxicity and, instead, help prepare the way for the One of justice and peace.

bell hooks, quoting Erich Fromm, issues a similar challenge: “the principle underlying capitalistic society and the principle of love are incompatible.” The reason they are incompatible—the reason they can’t go together is that love requires justice and breeds hope and peace; while capitalism has as its organizing principle disrupting peace and unsettling contentment. Capitalism is in the business of creating want and demand and markets of insatiatable addiction to more and more and more. And unfettered capitalism requires the exploitation of the many in order to enrich the few.

hooks continues, “The cultural emphasis on endless consumption deflects attention from spiritual hunger. We are endlessly bombarded by messages telling us that our every need can be satisfied by material increase… While the zeal to possess intensifies, so does the sense of spiritual emptiness.”

These strike me as written for us living amidst the news that our own president lobbied the Pentagon for one of his donors to get a $400 million contract to build his wall… amidst the reality that our locally-owned, faith-based Thrivent (in whom Maggie and I invest) are making money off children in cages… amidst the signs of climate change all around us.

The principle underlying capitalistic society and the principle of love are incompatible… indeed.

Repent, for the kin-dom of heaven has come near.  This is the one of whom the prophet Isaiah spoke when he said, “The voice of one crying out in the wilderness: ‘Prepare the way of our God, make God’s paths straight.”… repent, indeed… prepare, indeed.

This past Friday was the seventh anniversary of my dad’s death. His spirit has been close-by all week. And memories have been surrounding me. In particular, I’ve been re-visiting the conversation we had right before the triple by-pass surgery and valve repair that, in retrospect, gave him another twelve years of life, but at the time, for which the doctors had given him about a 50-50 chance of surviving.

I spent the day before the surgery with him and for much of it, it was just the two of us. At some point, I asked if there was anything he needed me to do if he didn’t survive. We talked a bit about the strongbox and a few documents, but there wasn’t much. But then I asked if he was scared. In response, he got a soft smile on his face and said something like, “you know, I don’t want to die. I feel like I still have a lot more living to do. But I am ready if it is my time to go. I know that I have lived my life relying on God and that God will be there to carry me home.”

I can’t tell you how much that brief conversation has meant to me. When his heart finally did give out, it was to that conversation that I returned. When the presence of his absence hits, I return to it for comfort. And I returned to it this week as I held Matthew’s story of John the Baptist and bell hooks words.

The soft smile on my dad’s face, his sense of peace came from his lifetime of relying on God. He certainly didn’t live a perfect life. It was marred by all kinds of loss and failures. And his sixty-nine year journey with diabetes meant that he had a keen awareness of his own mortality his whole life. But maybe it was because of all of these that his was also a life characterized by the continual return to love and justice—however imperfect. His was a life of turning and re-turning—which is very the definition of repentance.

In many ways, my dad should have been a Pharisee or Sadducee like those in today’s scripture. He was the eldest son of a tall steeple pastor. My grandfather ended his ministry as the Senior Pastor of the Center Church in Hartford, Connecticut, the same church Thomas Hooker pastored when he founded the colony in 1633. My dad went to Union Seminary at the height of its prominence and power as the sixteenth generation of pastor in his family.

But an experience he had had as a teenager had changed him. In 1947, when he was eighteen, my insulin-dependent dad travelled to Le Chambon Sur-Lignon, France to participate in a work camp that helped re-build the war-torn village. Once there and carrying the German last name of Voelkel, he was immersed in the trauma of Nazi-induced tragedy. He came face-to-face with what the love of power and money wrought. But he was also immersed in the story of how this French Huguenot village of one thousand souls had sheltered two thousand Jews during the war. And not one person had betrayed the cause.

When my dad went to that fancy seminary in New York, following in his tall-steeple pastor father’s steps, he chose to live and work in East Harlem in a group ministry focused on the same values of solidarity he had learned in France. And what he learned there was that it wasn’t only the big choices that called for the values and ethics of Le Chambon, but the little ones, too. The daily ones like where to spend his money and how he got from point A to point B.

My friends, we are living in a time where there are hourly, daily, weekly choices: to what shall we turn? The lure of the Pharisees and Sadducees of our time is strong. Money and power call to us endlessly. And a shopping spree can sound exactly like what the doctor ordered.

My dad’s memorial service was held during the second week of Advent. At the end, as we gathered at the columbarium to include his ashes and before we sang the Hallelujah Chorus in his honor, we received this blessing that my dad had asked for:

Let us draw near to the one who said: Peace I leave with you; my peace I give to you. I do not give to you as the world gives. Do not let your hearts be troubled, and do not let them be afraid.

On this second Sunday of Advent, may we be so blessed. Amen.