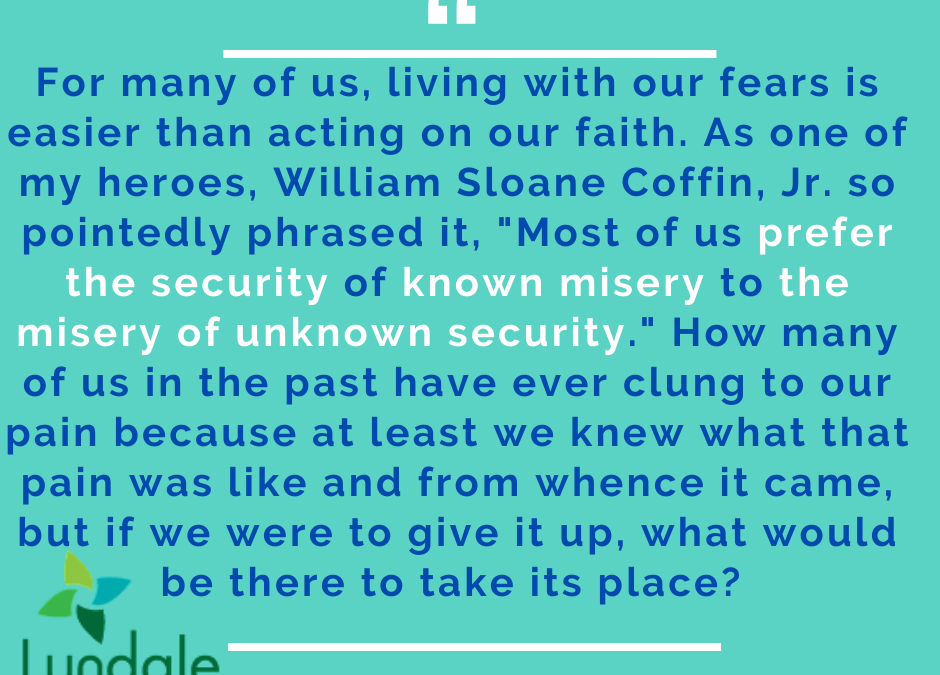 We’ve been through a lot during this past couple of years.  We’ve been blindsided by a deadly pandemic that has taken us on an emotional roller coaster ride, causing us to isolate ourselves and learn some new ways of interacting socially that just don’t seem to cut it.  We’ve experienced numerous incidents of both police violence and gun violence in our own communities, resulting in social upheavals and uprisings everywhere – violence on top of violence!  All of this in the midst of a collapse in our environmental systems due to global warming that threatens life on this planet as we’ve known it. That’s enough to scare the pants off of any of us and cause us sometimes to feel overwhelmed and hopeless.

With all of this in mind, I’d like for us to begin by reflecting together on the biblical witness we have that sheds some light on how our forebears in the faith dealt with their own times of paralyzing fear.  In those first few days following Jesus’ crucifixion and resurrection, we read in John’s gospel about how the disciples experienced some chaotic moments, when it must have felt like their whole world and everything they believed in was crashing.  It was Sunday evening following the discovery of the empty tomb.  The disciples were huddling nervously in the Upper Room.  They hid together, John tells us, “behind locked doors” because, “they were afraid of the authorities.”  I think that most of us, from various experiences in our own lives, can relate to what must have been some very anxious, fearful, and discouraged feelings.

I find their situation somewhat perplexing.  In the verse immediately preceding this morning’s lesson, John writes that “Mary Magdalene went and told the disciples that she had seen the [risen] Christ and related to them what he had told her.  You’d think that news would have absolutely catapulted them out of their grief and despair and elevated them irrepressibly onto a spiritual high as they celebrated Christ’s victorious resurrection. But John tells us that despite the unprecedented good news they had received from Mary, the disciples “were gathered together behind locked doors.”  Now why do you think this was so?  Just why might they have been hiding in fear rather than rejoicing in faith at that point?  I think that this is a particularly poignant question for us these days, as fear seems to have become such a major factor in our society, especially during these last four or five years.  Fear is a powerful motivator.  Fear sells, whether it is used for marketing products, or currying political favor.  So I would ask, why did the disciples then, and why do we now, allow ourselves to become so readily mired down and immobilized by fear instead of feeling encouraged to move out in faith?

The first reason, I would suggest, is because the disciples allowed themselves to be ruled by rumor rather than reason.  John says that they were behind those locked doors because “they were afraid of the authorities.”  There is no indication in the scriptures that any such immediate fears were justified.  There is no evidence that the violence of that terrible weekend went beyond the torture and death of the troublesome rabbi, Jesus.  The purposes of the authorities had been accomplished.  The leader of this threatening new religious movement had been eliminated.  Confidently they anticipated that the people would disperse.  But, I can only imagine that the rumors must have been flying.  Somehow, it seems always to be that way.  Whenever there are conflicts between any opposing groups or opinions, rumors (or misinformation) abound.  These rumors incite the flames of fear and fear has a way of escalating and feeding uncontrollably on itself.  And, most often, in the face of unchallenged fear, we find that reason is suspended, empathy eliminated, and compassion is cautiously contained.

Can you think of any examples like that, where unchecked rumors (or misinformation) have replaced reason and compassion?  I suspect most of us don’t have to look very far to find them, whether we identify panicky public reactions to rumors of terrorists, inflamed emotions about people who look or act differently than we do (particularly when it comes to race or sexual orientation), or self-righteous criticism of those who adhere to different political or faith systems.  Rumors often abound, and when they do they feed our own innermost fears and insecurities, and fear [fear] can have the power to paralyze our faith.

Which brings us to the second reason that the disciples might have locked themselves in behind closed doors – because, evidently, they had misplaced their faith!   This group, as you well know, was not some ragtag band of atheists or agnostics that Jesus had recruited.  Though they were not religious scholars by any means, clearly they were familiar with the Hebrew scriptures.  They, just like many of us these days, probably grew up reciting “The Lord is my shepherd, I shall not want. . .”  Undoubtedly, they all knew the stories of Moses and Sarah and Abraham, and well knew the sacred promise that God would never forsake them.  Furthermore, these people had spent the last three years with Jesus himself!  How many times had their beloved teacher told them in no uncertain terms not to be afraid?  Did you know that there are some 366 instances of “Fear not!” verses in the Bible?  Hadn’t any of this rubbed off on them?  Yet, came a time of trial and they all went back to acting as they did before Jesus ever called them to follow.  Immersed in the throes of a crisis, they misplaced the most important resource they had at their disposal – the basic positive attitude that is called forth by faith itself.  Some years ago, I read that cancer researchers at King’s College Hospital in London did a long-term study of cancer patients.  They found that seven out of ten of them “with a fighting spirit” were alive ten years later, while four out of five who “felt hopeless” at the time of surgery had died.  This dynamic of faith, or hope, in regards to the outcome of one’s health, because of its significance for promoting wellness, has even been given its own terminology by medical science: “psycho-neuro-immunology.”  Faith – trust is the best ally we have in promoting wholeness: physically, emotionally, and spiritually.  The great preacher Henry Ward Beecher once remarked, “Every day has two handles; [either] we can take hold of it with the handle of anxiety [fear] or the handle of faith.”  Which will it be for us?

Finally, we come to the third reason that the disciples might have locked themselves in behind those closed doors – because, for them and for many of us, living with our fears is easier than acting on our faith.  As one of my heroes. William Sloane Coffin, Jr. so pointedly phrased it, “Most of us prefer the security of known misery to the misery of unknown security.” (Repeat)  How many of us in the past have ever clung to our pain because at least we knew what that pain was like and from whence it came, but if we were to give it up, what would be there to take its place?  The television show “20/20” a while back, did a story on the most successful robber ever in Ft. Lauderdale, Florida.  As part of that story, an elderly woman was interviewed whose home had been burglarized several years earlier.  She related how, because of that traumatic experience, she now lived in a constant state of fear.  She spoke with bitterness, her demeanor was despairing, and her life seemed to have lost its meaning along with the loss of some of her most precious possessions.  And so, she too literally locked herself in behind closed doors rather than risk going out and opening herself up to whatever new possibilities in life might come her way.

BUT, our gospel story does not end with the disciples huddling together behind their closed doors, does it?  No, we’re told that the risen Christ broke through to them where they were, passed on to them the blessings of God’s peace, and then empowered them with the presence of the Holy Spirit – empowered them to move out in faith.  We also remember that though Jesus appeared to eleven of the disciples, Thomas, whom we commonly know as “the doubter,” Thomas was not present with them.  John goes on to recount:

A week later the disciples were together again indoors and Thomas was with them.  The doors were locked but Jesus came and stood among them and said, “Peace be with you.”  Then he said to Thomas, “Put your finger here, and look at my hands; then reach out your hand and put it in my side.  Stop your doubting and believe!” [Note that Jesus doesn’t speak judgmentally. He simply offers Thomas what he says he needed and calls his bluff – then comes the astonishing part!]  Thomas – without demanding to have the proof literally in hand – answered, “My [Savior] and my God!”  [Then] Jesus said, “Do you believe because you see me?  How happy [how blessed] are those who believe without seeing!”

Despite all those compelling reasons that can keep any of us locked in and immobilized by our fears – whether it be the power of ugly rumors or misinformation spread by unchallenged societal forces, the predominance of negative thinking, or the comfortableness of staying with that which is familiar, even when it is not in our own best interests – despite all of these powerful fear-based factors that tend to keep us all in place, instead of waiting for proof positive in hand, on his own the doubting Thomas took a gigantic leap of faith and let go of his fears – “My [Savior] and my God!”  It was a leap that no one else could make for him and that each of us must make on our own, as well.  Even Thomas had no guarantee that subsequent life experiences would not dim his memory of that awesome divine encounter or call into question the meaning of that event.  Because for Thomas, as for us all when we consider all the unknown and scary challenges facing us today and in the future – life itself is a risk and taking risks is a matter of faith and faith is never beyond doubt.  If we try to wait for undeniable proof before we act, then none of us would ever believe.  May God help us all to take the risks necessary to act on our faith and NOT be manipulated or immobilized by our fears.  Amen.