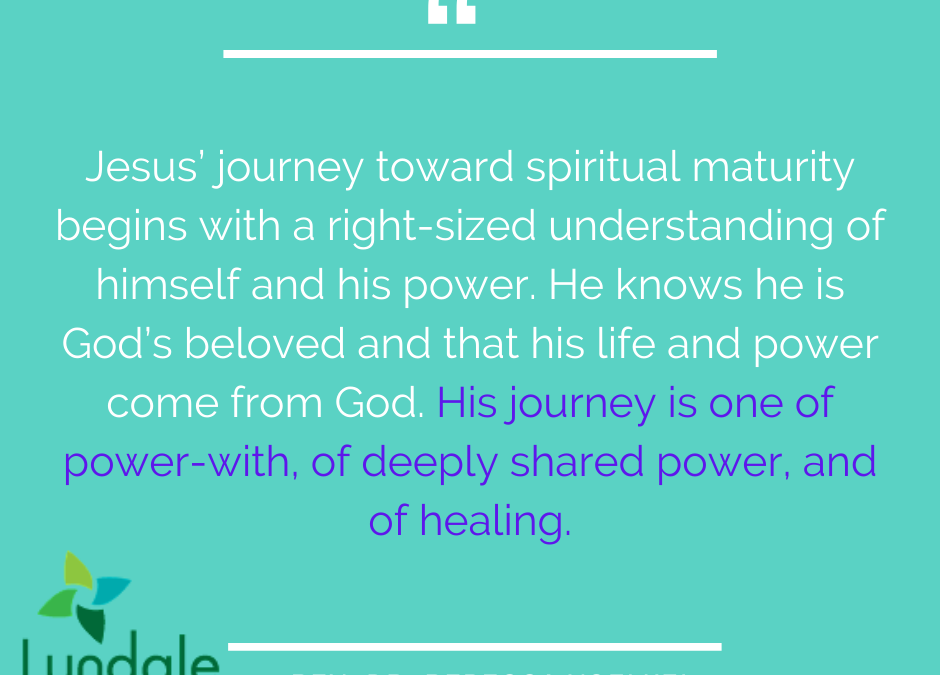 When I was ordained and in my first call as pastor at Spirit of the Lakes, I had a mentor through a program of the national United Church of Christ. His name was Bill Webber and he was in his late seventies.

During my first year at Spirit of the Lakes, Bill and I talked several times on the phone and he came and met with me and the church council for a retreat weekend. There were many things about Bill that made an impression on me, but perhaps the most important was a conversation we had while he was visiting in person. At one point in our conversation, Bill fixed me with a gentle but firm stare and said, “you know, Rebecca, when I think about what we are supposed to be doing together as church, I find myself going back to the letter to the Colossians. The point of church is to help us each individually, and all together, become mature Christians. And part of how we mature is getting clear about what we are willing to die for, so we can know better what we are living for.”

Part of what made this point so powerful for me was that so much of Bill’s life illustrated how much he was seeking to mature in his relationship with God and by following in Jesus’ path. Early in his ministry, Bill had founded the East Harlem Protestant Parish with two friends. For years, Bill sought to deepen the connection between his inside life and his actions, his faith and his practice. And many times in his ministry, he’d been arrested and threatened with violence for his work.

Bill had later been president of New York Theological Seminary where he started a Master of Divinity program in Sing Sing prison. When he was elected president at New York seminary in 1969, his predecessor had raised objections because Bill’s so-called “radical experimentation” at the school would lead to placing too much focus on social action rather than on evangelism. He was there for fifteen years as president and grew the reach and scope of the school dramatically.

So when Bill looked me in the eye and urged the path of individual and communal spiritual maturity, I heard his words as truth. He knew what he was living for and what he was willing to risk for his faith.

As we begin this season of Lent, my fifty-first on this planet, I have been thinking a lot about Bill. Some of my thinking about him is wondering how he might talk about this season that is so fraught for so many. How would he reckon with how corrupted and misused Lent has been. What would he say about the distorted Lenten calls for self-loathing? What about how Lent has been used as an excuse for unspeakable anti-Semitic violence, for pogrom and Holocaust?

I think he would name this reality. I think Bill would be urging us to ask how Lent can help us follow Jesus more fully, how can this be a time for deeper maturity in the path toward Jerusalem? Part of this maturity is the reality that the church needs to confess, repent and make reparations for what has been done its name. And, we as Christians or ones who seek to follow in Jesus’ path, are invited in this season to confess, repent and repair for all the harm done in our names. Lent is an opportunity to deepen our maturity. And adulting is complicated, especially spiritual adulting!

The biblical story of Jesus’ temptation in the wilderness is a powerful place to start on our Lenten journey. This story is found at the beginning of chapter four of Matthew’s gospel. And the end of chapter three is Jesus’ baptism. So, Jesus goes from the heavens opening to him and the Spirit descending like a dove and hearing God’s voice declare, “This is my beloved, with whom I am well-pleased” … he goes immediately from this into our text for today. From glorious blessing and success directly into temptation.

“If you are the Son of God, command these stones to become loaves of bread.”

“If you are the Son of God, throw yourself down; for it is written,

‘God will command God’s angels concerning you,’
and ‘On their hands they will bear you up,
so that you will not dash your foot against a stone.’”

“All these I will give you, if you will fall down and worship me.”

And we are invited into answering the same questions. If we are to be followers of Jesus who was a good, practicing Jew, how are we to grapple with these same questions?

It seems very timely to me. Because, honestly, I can’t remember a time when the question of how to faithfully follow Jesus has been more pressing. What am I supposed to be doing? How are we as Christians supposed to be acting right now?

As I watch the destruction of sacred indigenous land at the US-Mexico border to build a wall to keep refugees of US economic policy and war out; as I hear about the continued separation of families; and the opening up of national lands for mining and fracking; and the muzzling of scientists speaking data about the coronavirus, my desperation grows. I keep asking myself, what can I do? I so want to be the hero. I so want to have the power to change it, to fix it.

I have the sense that if the tempter took me up to the pinnacle of the Capitol building in DC and told me I could have the power to crush ICE and destroy the wall and have the government under my control, that I would, in fact, be sorely tempted. Amidst the chaos and pain of this moment, the lure of absolute power-over is deeply seductive. I have a lot of compassion for that early Jewish community that set up a golden calf and worshipped it.

But Jesus’ path toward Jerusalem isn’t one of power-over. It isn’t one of vindictiveness or vengeance. Jesus doesn’t take the bait and claim the power for himself. Instead he answers:

‘One does not live by bread alone,
but by every word that comes from the mouth of God.’”

“Again it is written, ‘Do not put the Lord your God to the test.’”

“Away with you, Satan! for it is written,

‘Worship the Lord your God,
and serve only God.’”

Jesus’ journey toward spiritual maturity begins with a right-sized understanding of himself and his power. He knows he is God’s beloved and that his life and power come from God. His journey is one of power-with, of deeply shared power, and of healing.

When Bill Webber died in 2010 at the age of 90, the current president of New York Theological Seminary reflected on Bill’s life and ministry—particularly his time in East Harlem. He said, in his life and ministry, “Bill always went further… he knew that it was going to take a transformation at the very root of what it meant to be Protestant.”