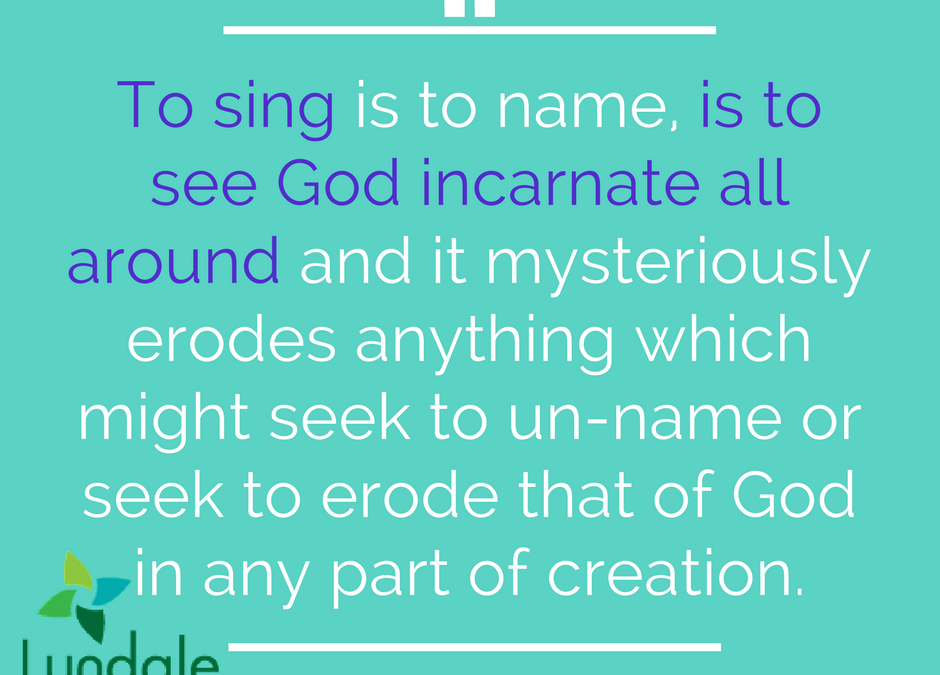 Psalm 96 and portions of A Wind in the Door

The building was fairly remote– at least it is in my mind’s eye.  It sits on 106 acres of land in the mountains of Tennessee, set amidst trees.  It was built in the 1930’s.  It was first home to classrooms for folks struggling to form a labor movement.  But on this night in the 1950’s, it housed a group of mostly African American and some other folks, learning the techniques of non-violent direct action in preparation for sit-ins across the Deep South.  They were mostly young people sitting at desks and tables, studying and talking, making plans to help transform racist laws using their bodies and their lives.

I fill you with Naming.
Be!
Be, butterfly and behemoth,
be galaxy and grasshopper,
star and sparrow,
you matter,
you are,
be!

O sing to God a new song;
sing to God, all the earth.
Sing to God, bless her name;
tell of her salvation from day to day.
Declare his glory among the nations,
his marvelous works among all the peoples.

As the sun went down on the Tennessee mountains, the smell of the settling dew came through the windows and the lights were turned on as the instruction continued.  But at some point in the evening, another odor began to waft in.  Something was burning…

Before they knew it, the students of non-violence were surrounded by the epitome of violence.  All around the building, members of the Klan stood, rifles and torches in their hands.  As several burst through the door, they ordered the young people to the floor at gunpoint.  Some in one room, others in another.  And for what seemed like hours they lay there, hands over their heads, waiting for the shooting to begin.

But something happened that night.  As the Klan stood with their guns trained on the young advocates of non-violence, someone began to sing “We Shall Overcome.”  And soon the song traveled to the other room until all were singing.  As Bernice Johnson Reagon tells the story, the Klan didn’t know quite what to do and time seemed to stand still as violence and non-violence met one another.  As the verse ended, there was a pause until someone started a verse that had never been sung before.  With the power of the Holy Spirit, a voice rang out “We are not afraid, we are not afraid, we are not afraid today.  Oh, deep in my heart, I do believe that we shall overcome someday.”

This morning, we are gathered as a congregation, a community of faith amidst a time that seems particularly painful and anxiety-producing. I’ve read on many of your Facebook walls as you’ve written #MeToo. I’ve had conversations with several of you who are struggling with getting out of bed. I know that some of you are grappling with the end of relationships and still others are aching for the lack of them. And then, of course, are the daily trauma-inducing actions of our president whose racism and misogyny are as frequent as they are despicable. The times seem heavy and ominous.

And amidst this, I went to the lectionary to see what text it invited us to consider together and I found there Psalm 96. Sing to God a New Song… that made me pause a bit. I have to admit that I felt a resistance to this. I don’t much feel like singing and I’m not sure if you do either. I’m not sure if I literally or metaphorically feel like singing.

But as I’ve prayed and thought about this morning’s service in the context of these times, I have been filled with deep emotion, had my reluctance challenged and been taken back to story after story, and memory after memory about the ways in which music has been God’s saving hand in my life.  I’ve been transported to all of the bedsides at which I’ve sat as a pastor and a chaplain, when the person was in a coma or already along the road in the active dying process and as we sang the old hymns like “How Great Thou Art” and there were visible signs that the person responded—either moving their lips to sing along or their countenance brightening.

As I’ve been transported back to these stories and memories, my heart has been reminded of why it is important, in the context of trauma and pain, to pause and sing and give thanks for music.  There are at least two reasons for this thanksgiving that I’d like to lift up this morning for our consideration.  The first is that in many ways, music is a closer expression of the language that God has knit throughout the universe.  As the version of the Lord’s Prayer which we often use here at Lyndale says, “the hallowing of your name echo through the universe.”  Or as Victor Hugo says, “Music expresses that which cannot be put into words and that which cannot remain silent.”

Somehow, someway, God has created a harmony of stars and planets and mitochondria and cells and energy that sing together in a glorious song of creation.  Madeleine L’Engle has tried to describe this in her book, A Wind in the Door.  The poem we read for today’s contemporary reading is a portion of this incredible theological work.

For L’Engle, as with many theologians, music expresses the language of God and it invites all of creation into the song of naming.  Naming and being named is the opposite of un-naming or being without a name.  Music has the power to interrupt the trauma and violence. Music recognizes the exquisite song within every part of creation.  Music recognizes, and hearkens to, that of God within each person and part of creation.  To sing is to name, is to see God incarnate all around and it mysteriously erodes anything which might seek to un-name or seek to erode that of God in any part of creation.

And this brings me to the second piece of reflection I’ve been having.  Because music is one of the closer approximations of the language of God knit throughout creation, it is also a powerful expression and experience of the gospel’s call for justice and life and liberation.  As Bernice Johnson Reagon, whom some of you may know through the African American women’s a cappella group, Sweet Honey in the Rock, as she tells it, that night at the Highlander Center in Tennessee when that brand new verse of “We Shall Overcome” was born, music helped incarnate the belovedness of each of the people present in that room.  It cut through the un-naming and hatred the Clan was seeking to perpetrate and instead brought them to their senses enough to recognize God’s presence in the room.

Another story shared in a newspaper article helps illustrate this point.

They had nothing but suffering, these women, held captive in a Japanese prison camp in Southeast Asia during World War II. They were separated from their parents and husbands, abused by brutal guards, starving, filthy, diseased, with no end to their misery in sight.

Thanks to two prisoners – one a society matron who had been trained at London’s Royal Academy of Music, the other a Presbyterian missionary – they had Dvorak, they had Mendelssohn, they had Chopin, Debussy, Brahms. Norah Chambers, the musician, and Margaret Dryburgh, the missionary, transcribed the pieces from memory and taught a choir of English, Dutch and Australian women prisoners to sing the instrumental parts. . .

The music conveyed beauty, dignity and order in a world of ugliness, public shame and chaos. Decades later, camp inmate and vocal orchestra member Betty Jeffrey wrote . . . from her home in Australia to say, ”When I sang that vocal orchestra music, I forgot I was in the camp. I felt free.”1

“When I sang…. I forgot I was in the camp. I felt free.”  Music can transport us out of oppression, out of chronological time and help us visit, if only for a moment, God’s time, God’s naming, God’s love song knit throughout creation.  And in those momentary glimpses of God’s time and space, we are given visions of what songs we might be singing and work we might be doing in every moment of our lives.

On Christmas Eve of 1914 in the frozen trenches of Belgium, surrounded by frozen bodies and with guns trained on them from a few hundred feet away, a few German soldiers began to sing Stille Nacht, heilige Nacht, Alles Schlaft, einsam wacht….”  It was followed by pure silence, filled with awe and prayer.  And then, “God rest ye merry gentleman, let nothing you dismay.”  And then, slowly, another and another song.  Until all the guns were set aside and each side entered into the “no man’s land” that separated them.  And there, for the whole night, songs were sung, games were played, brandy was shared and naming happened…

It did not end the war.  It did not even end that battle.  But for a brief moment of time, God’s song was sung.

We are living amidst times that need God’s song to be sung now. The tiki torches of white supremacy still burn. The degradation of war still rages. The prevalence of sexual violence still threatens to overwhelm.

And so we must sing—to name, to re-member the beauty of creation, to be reminded that we are not afraid. To claim freedom here and now.

Thanks be to God.  Amen.