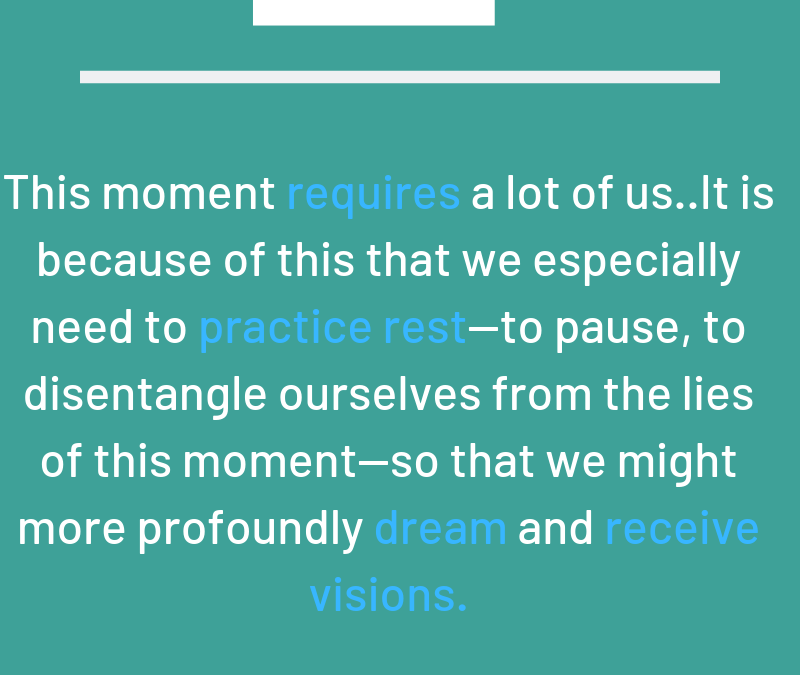 My life flows on in endless song; above earth’s lamentation, I hear the real though far-off song that hails a new creation. Through all the tumult and the strife, I hear the music ringing; It sounds an echo in my soul- how can I keep from singing?

Though the earth should change, though the mountains shake in the heart of the sea…

We didn’t learn many details about her except that she was four years old, a child of the Cheyenne River Reservation and that she fell into the river and her body was missing. Searchers had been up all night looking for her and they had spent much of this day as well. “I’m sorry I wasn’t here earlier to meet with you,” one of our guides, Reuben, had said. I was part of the search party. When Toni, our primary leader, called from a different funeral for a 21 month-old to say she’d be late, too, she said, “This is life on the reservation, Rebecca.”

Though its waters roar and foam, though the mountains tremble with its tumult.

In the midst of the worst refugee crisis in world history, this Administration is trying to deny asylum claims and cut off any path to life for hundreds of thousands of migrants.

The nations are in an uproar, the kingdoms totter.

My seminary friend and colleague who is now a seminary professor spoke for me this week when she posted on Facebook, “Feeling the need to do more to resist and protest the madness. Unsure how.” Based on the dozens of responses of “same” and “me, too” and “amen,” it seems we’re not alone.

I’m standing in the need of prayer this morning. After two and a half years of protesting and resisting, reading and writing, worrying and testifying, I am scared and drained. When I read Rabbi Avi Olitzky’s interview this week with ABC News and his comparison of this moment in our country with Nazi Germany and fascist Italy, I asked myself, what are we to do?

I’m tired and I’m scared. And I’m standing in the need of prayer.

God is our refuge and strength, a very present help in trouble. Therefore we will not fear.

I can’t tell you how much I need to hear these words, even as I struggle to believe them.

This morning, we are continuing our reflections on Sabbath practice—and particularly the role of rest in Sabbath practice. And I find it both perfect and ironic, given where I am at the moment.

Rest, sleep, pause. Step back, tag out, take a break. Disentangle, take a breather, sit this one out. Resting has many connotations. And in the Sabbath practice of Orthodox Jewish tradition, it is connected to stepping away from work and clocks in order to follow the natural rhythms of the setting and rising and setting of the sun—finding a way to pay attention to God’s time instead of our own. In the practice of Sabbath, there is both a building of trust in God even as it requires a trust to know that everything will be OK when we pause.

The Sabbath practice of rest is an exercise in trust and connection—with the rhythms of life and rooted in God’s time.

As you know, about a dozen of us from Lyndale recently spent a week on the Cheyenne River Reservation working with their horse ministry whose primary purpose is healing—for abused horses and for Lakota youth amidst a suicide epidemic. Both in preparation for our trip and while we were there, Toni Buffalo, our leader, asked us to study the impacts of the Doctrine of Discovery—the policy of Christian and white supremacy which attempted to annihilate millions of Native Americans in this hemisphere. Her reasoning was that the Doctrine of Discovery is still very much alive in this country—and it is nowhere more evident than on the reservation.

As I walked around the reservation, I experienced the deep contrasts of grief and oppression, and resilience and hope. There was the nearby school—Takini (which in Lakota means dead and alive again) and was named for the survivors of the 1890 massacre at Wounded Knee who walked the hundreds of miles in the snow to return home. There was the land on which very little grew. There were the horses who came to us and rested their muzzles on our shoulders or just stand around us, looking into our eyes.

Running through it all was the palpable and very present grief at the death of Byron Buffalo. Bryon had dreamed the horse ministry into being. He was the Dakota Association Minister and it was through his leadership that much of the healing work had come to pass. He had died suddenly of a heart attack in July of 2018 and everyone in the community was mourning.

He had been born a Lakota-speaking, 100% Lakota man on the Cheyenne River Reservation and he died only a few miles from where he began, having spent his whole life working to embody his faith and culture.

This past Wednesday, Maggie and Shannon and I were invited to return to the reservation to participate in the Wiping of Tears Ceremony on the one-year anniversary of his death. Throughout the whole four-hour ceremony, I was so aware of Sabbath and rest and the role they played in Byron’s life and the life of the horse ministry.

In the face of unrelenting racism that sought to infect every piece of Byron’s life, he spent countless hours disentangled from the Doctrine of Discovery-shaped reservation life. He spent countless hours on horseback, riding, countless hours praying and in silence. And as a result, he was freed to dream dreams and see visions. That’s the language Toni and so many others used—he saw things others didn’t see and he just knew they had to be done. He rested and took time away and then he had visions and worked to make them happen.

Come, behold the works of our God;
see what desolations he has brought on the earth.
She makes wars cease to the end of the earth;
she breaks the bow, and shatters the spear;
they burn the shields with fire.
“Be still, and know that I am God!

My friends, this moment requires a lot of us. I don’t have any idea what the one right thing to be doing is. But I believe we will be asked one day what we did during this time in our nation’s history. How did we resist? How did we protest? How did we make some small piece of repair in the face of the Doctrine of Discovery-shaped world we lived in?

It is because of this that we especially need to practice rest—to pause, to disentangle ourselves from the lies of this moment—so that we might more profoundly dream and receive visions; so that we might remember to trust the God of Jacob and Rachel and Leah; so that we might root ourselves in the great web of love and life, of horses and lakes and wind and song.

There is a small island off the coast of Georgia called St. Helena’s island. On it rests the Penn Center—a small museum, cultural center and retreat house. It is the longest running African American community center in the United States, founded in 1862 when slaves from what is now Sierra Leone overthrew their slavemasters. Isolated from the continental US for a hundred years, it has been a place of refuge and rest and self-determination for many Black leaders. To its safety and shelter, Martin Luther King went many times. And in its embrace, much of the vision of the Civil Rights Movement—most especially the Poor Peoples Campaign—was born.

We are all standing in the need of prayer and disentangling.

We all need to be reminded and re-member that God is in the midst of our city and our country… God will help us [again and again] when [each] morning dawns.