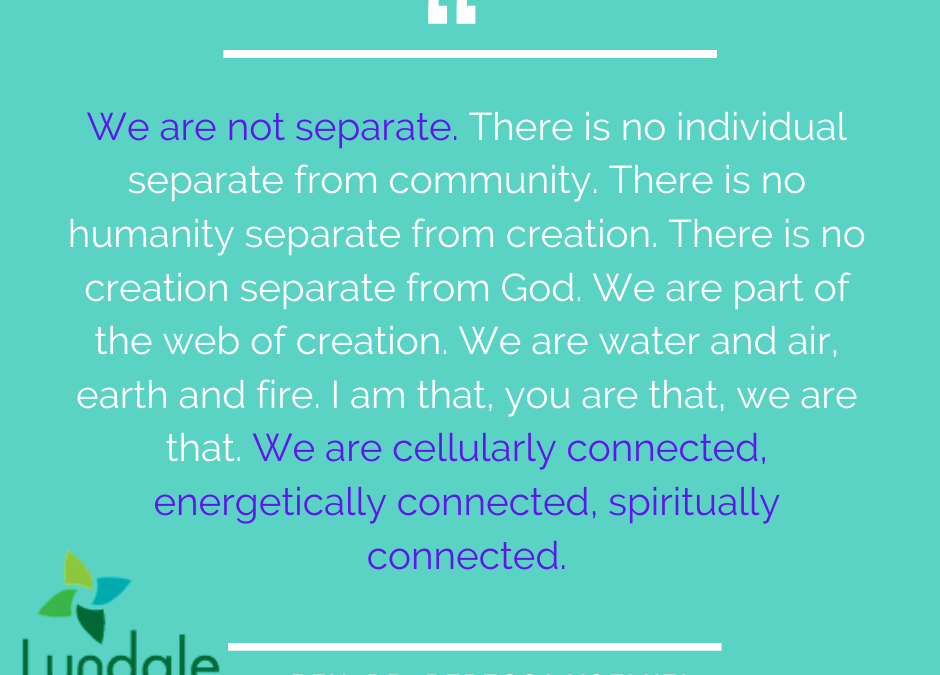 I was twenty-eight and had recently graduated from seminary. She was in her late eighties. I was working as a chaplain at the VA hospital in Seattle and I was surprised when I saw her on my list of patients to visit that day because the vast majority of folx that I saw were men. I didn’t know anything about her, except that she’d served as a nurse during World War II.

By the time I was visiting her, she had already started the active dying process and was unconscious. We didn’t know of any family and she was alone when I entered her room. The curtains were drawn and the room was quiet as I sat down beside her and took her hand which was warm. Her knuckles showed arthritis as a gently clasped them but she didn’t seem to know I was there. After sitting together for a while where I just matched her breath and tried to hold her in prayerful attention, I began to sing. What came to me was How Great Thou Art. I sang with my eyes closed for much of it, but when I got to the chorus, I looked down and her lips were moving along with mine, “then sings my soul, my savior God to thee, how great thou art, how great thou art…”

One of my favorite pictures of my dad is of him sitting in the cockpit of a sailboat, hand on the tiller, looking forward with a face of deep peace and pleasure woven together. It is from a trip I wasn’t on but it brings back many memories of growing up sailing on our 22-foot Venture that my dad had saved for years to buy. We would sail along the Ohio shore of Lake Erie and to its islands from time to time. Because of those trips, I have a body memory that is evoked every time I look at the picture of him. That look of peace and pleasure would happen when we would hit a pocket of air and the sails were trimmed and the sun was shining and we would find that point at which we were being carried by the wind and the boating was heeling but not too much and we could smell the water in the air and for a few moments, the boundaries of the lake and the boat and our bodies seem to recede and it was all connected.

… were of one heart and soul.

Almost every day since the beginning of Covid, Maggie and I have walked along Minnehaha Creek to Lake Nokomis and along its shores and back home again. Almost every day, I take a few pictures along the way. There is a particular spot on the creek, a particular tree, a particular point on the hill that I pause and look, stop and pay attention. I don’t do it consciously, it is as if I’m led to it.

This Lenten season, we have been journeying together around the theme of reparations and some of its different aspects. We began with Susan Raffo leading us in embodied practice and telling us the story of her Jewish friend who gave her a way back to Jesus by suggesting that Jesus’ power lay in his ability to know in his bones that he belonged unconditionally. He could hear the words “You are my child, the Beloved, with whom I am well pleased” and know he belonged: to the land, to the creatures who waited on him in the wilderness, to his community who were his kindred. The land, the kindred creatures and the community did not belong to him, he belonged to them. We began our Lenten journey with unconditional belonging

In the last two weeks, we’ve also looked at the ways in which telling the truth about the past and the past that is really the past-in-the-present is important. We have to tell the truth about the Doctrine of Discovery, about the lies that white supremacy and Empire tell. We have to re-member the truth from the past and not forget and not cover it up. And then last week, we talked about how relationships of deep and true solidarity are necessary for true healing and repair to happen. Ashley quoted Susan Raffo’s practice and reminded us, “Solidarity is a state of relationship, a state of being. It is also about action, but action which emerges out of relationship. We feel solidarity, we are solidarity. From there, we do solidarity within the relationship.”

And this morning, we are looking at the spiritual practices of reparations. How do we prepare spiritually, how do we practice, again and again, so that we can actually do the work of reparation?

I have been praying and reading and thinking and seeking around this question for quite a while. And I have to be honest that I have some ideas, some practices, some tidbits that seem like truth but I share them out of a profound sense of humility. Because as I have engaged the truth-telling about my own past and the past of our beloved United Church of Christ and Christianity in general; as I’ve sought to ground myself in decades-old genuine friendships and relationships of solidarity, I am more and more clear about the power of the lies that Empire tells. I am more clear about the strength of the lies of whiteness and white supremacy in my life. Guante says, “white supremacy is not the shark but the water.” I am more and more aware that the water in which I have been swimming so much of my life, the air that I have been breathing has shaped and formed me. White supremacy has distorted my very cells, in some ways.

This week I spent a good amount of time with about twenty religious leader colleagues from around the country who are experimenting with models of reparations for work with white folx. It was a very moving and powerful experience. But one of the most powerful pieces was the deep and palpable grief that all of us expressed at what white supremacy demanded we need to give up in order to be white. We all said that there are many models emerging about reparations work with white folx, but one of the starting points is to name the lies of Empire and white supremacy. And to grieve for all that has been lost to these lies. And in the face of these lies and rooted in this grief, to tell the truth:

One of the bodyworkers who was part of this reparations convening this week talked about this reality of connection using some big words. He said in polyvagal theory, on a neurological level there is a truth about trauma. And that truth is that our nervous systems need to co-regulate before we can self-regulate. In other words, we need to heal collectively in order to heal individually. Each of our individual “I’s” exist because of “we’s”

If we are cellularly connected; if our nervous systems are energetically intertwined; if we are spiritually interconnected then the model of competition is a lie, too.

Cooperation, reciprocity, interdependence. These are the truths: of creation, of scripture, of Jesus’ ministry.

Our text from the fourth chapter in the Book of Acts is really an aspirational text, but it gives us an idea of what our Christian forebears were aiming for:

Now the whole group of those who believed were of one heart and soul and no one claimed private ownership of any possessions, but everything they owned was held in common.

Out of a place of deep connection and interdependence came a kind of sharing and generosity.

So, how do we practice connection, reciprocity and generosity?

But I have had glimpses. What about you?

For me, singing and singing with others is often one of those practices. Singing How Great Thou Art with the nurse as she crossed the River Jordan… and with the Lyndale Women’s ensemble at Jeanine’s mother’s memorial and my father’s memorial and with Joyce Battcher-Malchow as she invited us into her dying process and with Dan VanderPloeg and with Kayla and with Elizabeth… the breathing together, the harmonizing, the resonating, the synching of the tempo… we were, momentarily, of one heart and soul.

And those moments of sailing with my dad… being carried by the wind, held by the water, warmed by the sun… they were a palpable reminder of a reciprocity of life.

What about you? What about us? One of the most powerful things about this community for me, is having some idea of what that is for each of you and getting to practice it together: Elly’s garden, Ann’s kayaking, Emily’s drawing, Claire’s singing, Paul’s piano playing… and Ritual Sunday and Silent Night with candles on Christmas Eve and Holden Evening Prayer’s Lord, Listen to your Children Praying and Don Portwood’s interplay and Don Kvam’s unmuted amen during Zoom church… what are the practices that remind you that we are interwoven? That there is enough and more than enough when we share it? That help us move from I to we in circles of reciprocity?

In 2017, Maggie, Shannon, my mom and I took a trip to Scotland. It was a sacred pilgrimage on many levels. Shannon was ten and when I was ten, my grammie had taken me and my parents to Scotland. We also all knew it was likely my mom’s last big trip and her last back to Scotland. So, every day of the trip felt special. But one stands out for all of us and was captured in one particular photo.

We had taken a small boat on our way to Iona and stopped on a tiny island that didn’t have human habitation. It was made of volcanic rock whose energy you could almost feel palpitating below you. There was a puffin colony. The heather was in bloom and the rain of the day had subsided and a brilliant sun had broken through the clouds. The picture is of Shannon and she’s turned toward us with the wind in her hair, smiling brilliantly. Still, when asked about her best day in life, she names that day on Staffa. It was a day of pure joy. She was transfigured by the experience of being fully alive, completely connected with water and rock and sun and heather, with ancestors whose spirits we could almost touch.

And for a brief moment, you could see her knowing, in her bones, an unconditional belonging, the truth about her life.