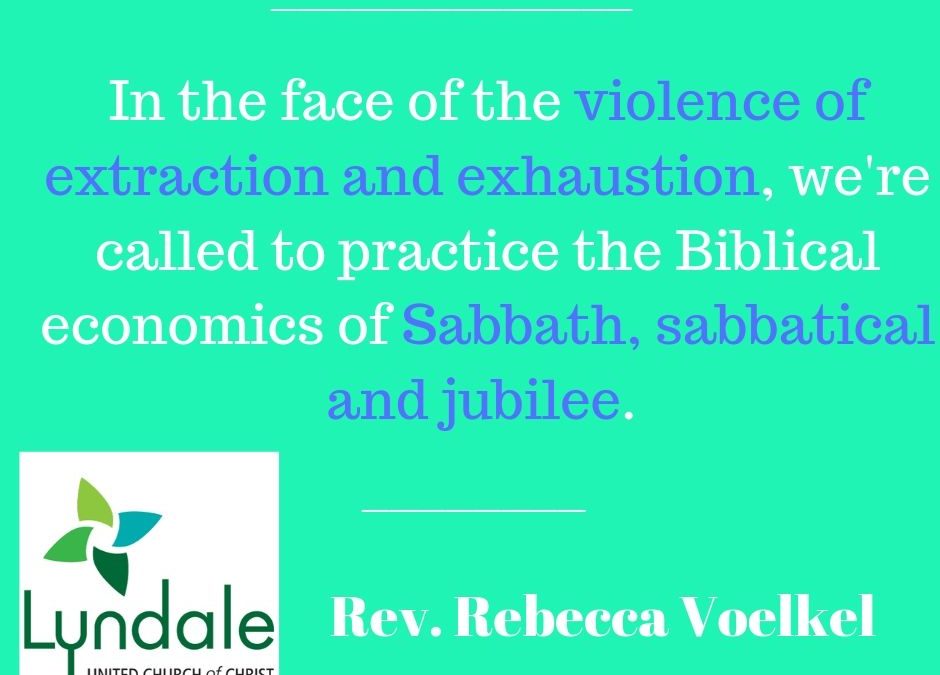 Holy One, lover of sabbath and fallowness, commander of rest and deep connection, blow through us here gathered. Bless the words of my mouth and the meditations of all of our hearts that we might taste and touch and feel your Holy Spirit. Amen.

When I was growing up, I spent a lot of time with my Scottish Grammie. As the only child of her only child, I had a particularly close relationship with her. One of the best things about Grammie was ALL the stories she told about her growing up years, her family and the churches she’d faithfully attended her whole life. On the latter, she would often distinguish her childhood Church of Scotland from the Free Church of Scotland which she would call the “Wee Frees.” In particular, she would talk about the sabbath rituals in which no laughter, gaiety or fun was allowed. It was what she called “do-or” which I later learned meant dour. But, apparently the Wee Frees had it even worse. I imagine in my mind’s eye scenes from the early part of Babette’s Feast that movie that profiled a group of Danish Calvinists and the French Catholic woman who saves them. But before Babette comes on the scene, the Calvinists are dresses in black, utterly silent, eating terrible food and all-around miserable. Do-or for sure.

Paired with this dour context of sabbath was the rest of the week in which my Grammie’s family would all rise well before dawn and engage any activity that would help keep them from starving. When my Grammie was young, that meant going to the harbor in Inverness in the hopes of finding a fish that hadn’t made it from the boat to the transport. When she reached twelve, it meant becoming a domestic worker in which she worked six and a half days a week and only had 2 hours off a week to visit her family. When she immigrated to this country, it meant working about twenty hours a day and sleeping from 2 am to 6 am.

Remember the sabbath day, and keep it holy. 9 Six days you shall labor and do all your work. 10 But the seventh day is a sabbath to the Lord your God; you shall not do any work…When you enter the land that I am giving you, the land shall observe a sabbath for the Lord. 3 Six years you shall sow your field, and six years you shall prune your vineyard, and gather in their yield; 4 but in the seventh year there shall be a sabbath of complete rest for the land, a sabbath for the Lord… And you shall hallow the fiftieth year and you shall proclaim liberty throughout the land to all its inhabitants. It shall be a jubilee for you: you shall return, every one of you, to your property and every one of you to your family. 11 That fiftieth year shall be a jubilee for you: you shall not sow, or reap the aftergrowth, or harvest the unpruned vines. 12 For it is a jubilee; it shall be holy to you: you shall eat only what the field itself produces.

As Ashley begins her sabbatical and we are continuing our exploration of Sabbath practices, Matta, Paul and Allison (via Zoom) and I met to plan our July and August worship. Over the course of the next eight weeks, we’ll be looking at various parts of sabbath practice—rest, deep connection, enough-ness, belonging, communion, food and feasting, practice for disability justice, and bodies and sexuality.

For our spiritual forebears, rest, community, worship, good food, pleasure and embodiment which re-connected them with the point and purpose of life was commanded of them by G-d. The importance of sabbath practice was extended to the land every seventh year—fallowness was necessary for re-creation, rejuvenation and continued fertile-ness. And, then, in that same spirit, every seven times seven years, there was a radical re-distribution of wealth. Any disparities were addressed so that none had too much and none too little.

Our texts suggest that sabbath economics, Biblical economics are rooted in the balance of rest and work. They are focused on community and connection, on deep relationships and the health of all people.

I’ve been thinking about these Biblical economics during this Fourth of July week as memories of my Scottish immigrant Grammie have been surrounding me.

When I was five, my family moved from Cleveland to Dayton, Ohio which meant my Grammie and I had to travel to see each other. But the distance made the visits even more special. One such visit was when I was nine. I got to take the Greyhound alone and spend a week with Grammie and her friends, all of whom were aunties to me. Over the course of those few days, Grammie’s friends came over every night. We’d go to Bob’s Big Boy for dinner and then come home for multiple games of card-playing, laughter, and watching Barney Miller episodes—usually after midnight. Then, everyone would find a place on the couch or bed and spend the night. In the mornings, we’d go to McDonald’s for breakfast. My understanding of chosen family was shaped in those visits—so much love and fun, laughter and years and years of connection. There were some blood relationships in the group, but mostly they were heart relationships.

But during the visit, Grammie also took me to several protests and picket lines created by the Gray Panthers and the local union. The local grocery store, Fazio’s, wasn’t paying its workers justly and it was price-gouging senior citizens. I remember marching in a circle in front of the Fazio’s not too far from my Grammie’s apartment, perhaps one of the youngest there.

I don’t think it is a coincidence that my Grammie, as a survivor of dour sabbaths and Protestant work ethics (that are better called Capitalistic work ethics)– that that Grammie, rebelled against both. And I don’t think it’s a coincidence that she saw a connection between Sabbath with its community, love and joy and Sabbath Economics with its rest and re-creation and radical sharing and equity.

I also think that my Grammie’s ability to discern between an economics of starvation and exhaustion and one of radical sharing and equity depends on regular sabbath.

My friends, I return thanks to God for each of you and all of you. I know that it is the quirky, honest, robustly singing sabbath practice with you—week after week after week—that gives me any hope of practicing Biblical economics in these times of violence and extraction. And I pray that, together, we might love on each other enough, laugh enough, remind each other of our belovedness enough so that we, together, might be known as Babettes and Jubilee proclaimers in the all-too-often dour world.