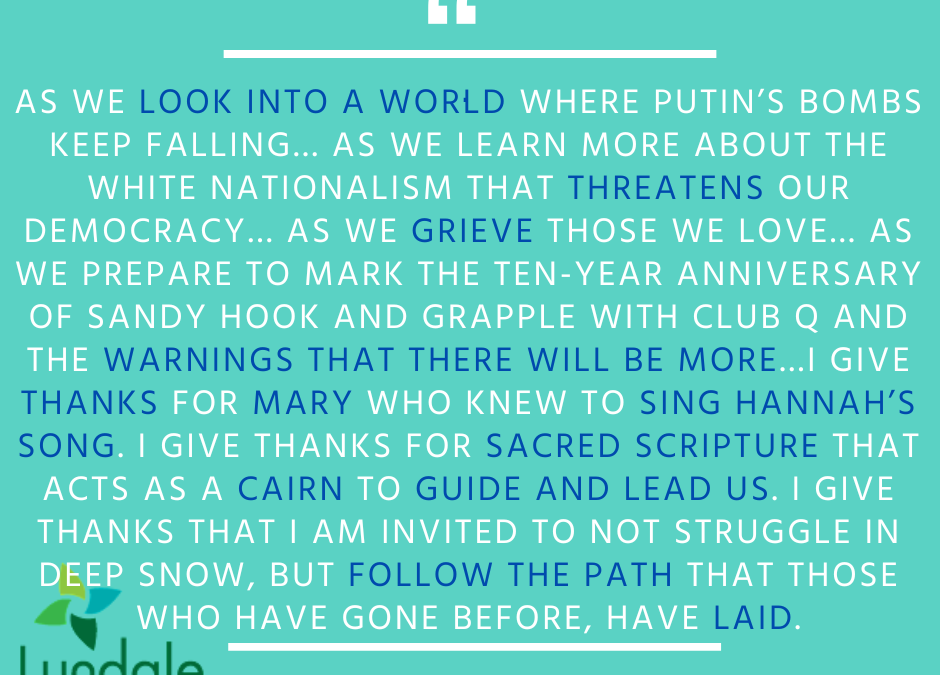 Holy One, maker of paths and teacher of songs, be with us here in this moment. Pause our hearts and open our spirits, that we might hear you even as we await your coming in joy. Amen.

But at the very same time, Brittany Griner was released this week and the Respect for Marriage Act just passed Congress and a good and decent man of faith, Rev. Dr. Sen. Raphael Warnock became the first African American from Georgia to be elected to a full term in the Senate. It is a lot of joy and sorrow mixed together.

And it feels very Advent-y to me, this chaos and sorrow, joy and hope all mixed together.

All of it stirs in me the question of how am I, as a Christian to live in the mix of it all? How are we as a faith community to act? How are we to ground ourselves in the hope and the joy, even as we grieve?

Amidst all these questions, I got a call from a dear friend and she asked me if I remembered a time we’d spent together in the Cascade mountains around this time of year. As it was shortly after I’d moved from the Midwest to the Pacific Northwest and the first time I’d been in the mountains, I had a very clear memory of it.

We’d left Seattle on a Saturday morning early and as we drove east, we got to a place where we had to stop and put chains on our tires. I’d never used chains in my life so I was very impressed. Not too much after that, we turned off the highway and into a natural area at which we parked. And then, she’d pulled out two pairs of snowshoes and helped me get mine on. Although a little bit awkward at first, I was hooked as we climbed up a path that was a switchback and well packed down by those who’d gotten there even earlier than we had.

But not too far into our hike, we made a turn and started hiking along a ridge. For the first part, my friend led and I simply stepped in the path she’d laid. But at one point, she stopped and asked if I wanted to lead. I enthusiastically said yes but it wasn’t too long before I was breathing heavily and deeply aware of how much effort and concentration it took. I had to step higher and pay closer attention and use muscles I didn’t normally use in order to lay down the path for my friend who was behind me.

I was also struck by how much relief I felt when we merged back onto a path that had already been laid for us. I was able to relax and not breathe as hard. I was able to look up and notice the beauty of the forest and the mountains when I didn’t have to create the path on which we were snowshoeing.

When we talked this week, my friend laughed at that part of the memory because she was calling to see if I remembered the Crème de Menthe we’d poured in the snow to make show cones. Well, I remembered that, too! It felt like such an act of joy.

This morning, we have the absolute delight to read Mary’s Magnificat, Mary’s song. It is one of the most beloved passages in scripture and, I honestly never tire of reading it or singing any of the renditions of it, particularly Rory Cooney’s setting using the Irish folk tune of County Down. Every year when it comes around in the lectionary, I find new and powerful pieces that teach me. And this year, I was reminded of something I knew before but that spoke to me in deeper ways.

When Mary, a very young woman who is pregnant out of wedlock goes (maybe flees?) to her cousin Elizabeth’s home to consider how to respond to all that is happening in her occupied world, she sings a song of resistance, liberation and love. But it isn’t a new song. The words she sings are very, very similar to those that Hannah sang several centuries before her.

When faced with possibly dire circumstances (being pregnant before marriage could get Mary stoned to death in the religious law of her time), Mary grounds and roots herself in her ancestor, Hannah, and sings forth her own rendition of Hannah’s song of resistance, liberation and love.

This past summer, Maggie, Shannon and I took a trip to Ireland and Scotland. In the first week of our time, we drove from Galway to Connemara National Park and its Twelve Bens as they are called. After a lunch of what we came to know was the vegetarian option: soup and bread, we set out for a hike toward Bengooria, also known as Diamond Hill. It is “only” 1450 feet, but I have to tell you for this asthmatic acrophobe, it was a deeply powerful, frightening and sacred experience.

At the beginning, we followed a small path that made its way up from the Hungry Hiker café, past the field with beautiful horses with a lot of fellow hikers. But as we climbed, we headed off the lower path and decided to take the upper path to the peak. It wasn’t too long after that that Maggie made the decision that she’d done all she wanted to do. After a picture with all three of us, Shannon and I kept heading up. It was at this point that the trail got very, very steep and narrow and my breathing got heavier. It was also the point at which we started to see piles of rocks, known as cairns, which marked the path and delineated the way to go that was safe, so you literally wouldn’t fall off a cliff.

By then, I was pretty much making sure I had three points of contact at all times- when I lifted a foot to step, I had two hands on the rocks above. When I moved my hands, I made sure both of my feet were firmly planted. It was also the point at which Shannon began gently encouraging me and pointing out the cairns. Right before we got to the top, we met three Spanish women, one of whom was almost immobilized by fear. After some joking around and taking a breather, we made the decision to have Shannon in the lead, with her eyes on the cairns and me and the terrified Spanish woman in the middle of the line as we held hands and walked along the ridge line to the peak. The view was breath-taking in a good way and we took what is one of my favorite pictures of Shannon ever, standing on top of one of the huge rocks at the peak with a broad smile on her face.

However, my glee was somewhat short-lived because we then had to keep going on the one-way path and make our way down. It’s hard to believe but the danger of falling off the cliff was greater on the way down, and it took holding Shannon’s hands and her keen focus on the cairns for us to make it safely.

When we got back to Maggie, we talked about the experience and the importance of the cairns. We remembered that they are pretty common in places that are above treeline, or treeless for other reasons, to mark the way forward. But cairns are also built to mark the graves of ancestors. (If any of you has been to Paul and Sheila Wellstone’s grave at Lakewood Cemetery, you will see stones on top of their headstone. In Jewish tradition, folx often will leave a small stone when they’ve visited a grave.) And it strikes me that this is similar to leaving stones to guide the way of those who come after us on a hike because our ancestors often faced similar situations to what we are facing and their grave sites can be cairns which guide us in how we might live our lives.

“My soul cries out with a joyful shout, that the God of my heart is great. And my spirit sings of the wondrous things that you bring to the ones who wait. You fixed your sight on your servant’s plight and my weakness you did not spurn. So, from east to west, shall my name be blessed, could the world be about to turn?”

This week I was on a panel with Rev. Dr. DeWayne Davis, Iman Asad Zaman and Rabbi Michael Latz for the Minnesota Women’s Economic Roundtable and we were asked to talk about multifaith models of living authentically amidst the oppressions of capitalism. I was struck by the fact that three of us talked about Dietrich Bonhoeffer and the ways in which his radical faith led him to honoring those whom the world would dishonor and resisting those whom the world would laud.

We are Advent people, my friends. Even as we await the birth of love and justice and compassion into our world, we claim the reality that God already knows our plight and our weakness and will never spurn us. Even as we await Emmanuel, God with us, we claim, with our ancestors, that God is already with us, love and liberation and compassion have already been born and the world IS about to turn.