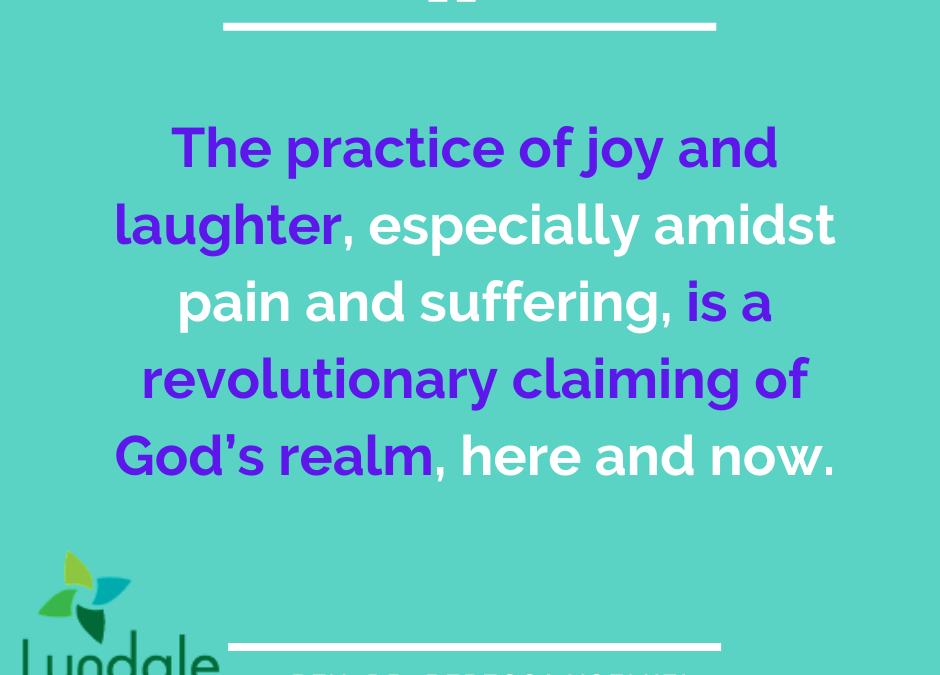 There are a lot of reasons why it’s been so hard, but besides the deep suffering that Covid has brought, a good deal of it has been the intentional, authoritarian attempts of the Trump era and the continuing attempts by those who want to fashion themselves in his image. The latest is the move in Texas to criminalize being transgender. And then the Empire restoration fantasies of Vladamir Putin which threaten Ukraine and, indeed, the world. It has been a hard few years… few months… few days.

But as I prepared for Mardi Gras Sunday, receiving memes and videos and jokes, I went back and read a number of pieces about laughter and creativity and dancing – particularly amidst difficult times. And I read over one of Lyndale’s guiding questions for this year: “how can each church gathering practice praising, cultivating connection, and “enjoying the Divine” together as a part of our Christian tradition?”

And I was reminded that one of the most powerful tools that colonizers and oppressors and would-be authoritarians use is despair. When people are so mired in the pain and misery of the present, they can not dream of a future of liberation. When we are so focused on voter suppression and prosecuting the parents of transgender kids and the removal of reproductive health and the invasion of Ukraine, we become despairing and exhausted and unable to resist.

But one of the things that we know from many liberation movements is that one of the most powerful tools of resistance is laughter and dance and celebration. There is a deeply revolutionary spirit and power that is unleashed when we laugh and dance and celebrate. For when we are laughing, we are breathing deeply of the spirit. And when we are dancing, we are claiming a joy that may be in the future, we are claiming it in the here and now.

Through laughter and dancing and celebrating, those experiencing colonization can break the power-over dynamic by claiming their full humanity manifest in joy, now. Through laughter, they invert the bad to make it comical or playful. They can use the farcical for a dead-serious purpose, embodying that colonization’s defeat is already real because they are fully alive and free.

It was Christmas morning in 1987, and I was in the remote, mountainous Salvadoran village of Santa Marta as part of a small delegation of North American Christians and Jews representing the Accompaniment Movement. We awakened, disoriented, to the ground shaking. Quickly, an older man who was a leader in the community explained that the Salvadoran government was dropping bombs nearby to scare and intimidate the residents of Santa Marta. The contrast between the ground-shaking bombs and the early Christmas morning was lost on no one. With such a backdrop, we heard more about the village’s history, including the killing of this elder’s daughter, who had been pregnant with her first child, and the murder of his childhood friend, who had been attempting to defend his own family. The elder described in detail the ways in which colonization targets real bodies with torture, pain, and death.

But the story made a sharp turn when, after describing the history, we sat in silence and prayed. Then he said, “Do you know how I can tell which North Americans are going to last here with us?” After a pause in which no one answered, he continued, “The way I know that anyone is going to last here is that they know how to laugh, to sing, to dance, to experience joy . . . because the work we are doing is so difficult, we have to claim the promise of how the world is going to be, now. We have to live the promise. That’s what our faith teaches us.”

I have been thinking a lot about that Salvadoran elder’s wisdom. I’ve come back to it as I’ve questioned whether or not we should be doing this service at this time.

But the Salvadoran elder has been speaking to me. And I’ve heard my queer ancestors—who used camp and outrageous humor as powerful weapons of transformation. I’ve been thinking a lot about the height of the AIDS pandemic when folx were dying and there was no treatment, let alone a cure and yet there was a fabulousness of resistance- like putting a giant condom over Jesse Helms house. Yes, the queer ancestors have been speaking to me.

And so has Reinhold Neibuhr, the author of the Serenity prayer that so many alcoholics and addicts pray, who also suggested that “[h]umor is a prelude to faith, and laughter is the beginning of prayer.”

I have to tell you that I am standing in the need of prayer and seeking to dig deep into my faith in these times. I am so very frightened and rageful, depending upon the hour or the day, by all we are living through. And so I am trying to laugh to bring me to faith and prayer. How about you?

But also want to say one thing about our scripture for this morning. In some ways, the text suggests that laughter and joy result after God delivers us from oppression and difficulty. Now, I am sure that there will be laughter and joy when white supremacy is finally dismantled—I can see the party in my mind’s eye. But on this Sunday, we are also rooting ourselves in the Salvadoran elder’s wisdom that the practice of joy and laughter, especially amidst pain and suffering, is a revolutionary claiming of God’s realm, here and now.

This claiming of a future promise in a present joy is one of the most powerful tools to defeat authoritarian attempts and movements of supremacy and hatred.

After the English defeated the Scots at Culloden Moor in the final battle of the fight for Scottish independence, they then outlawed the speaking of Scottish gaelic, dancing of the highland dances and wearing of tartan. My Scottish grammie often reminded me of this. And then she’d tell me about all the parties she and her friends had- out in the open, regularly and filled with dancing, singing and telling of jokes. She saw it as a way to honor the ancestors who never gave up and whose resistance was woven into her DNA… and mine.

And then, she’d tell me a joke or two or three. Here’s one of my favorites:

A Scotsman is walking along the road with a fifth of the finest scotch in his pocket when he slips and falls. As he’s lying there, he feels a little trickle of liquid running down his leg. And his prayer is this: “Dear God, let it be blood, let it be blood.”

And then my Grammie would put her head back and just laugh, delighted with herself.

Dear God, continue to bless us with your sacred laughter that we might continue to enjoy you. Amen.