Love is a Choice 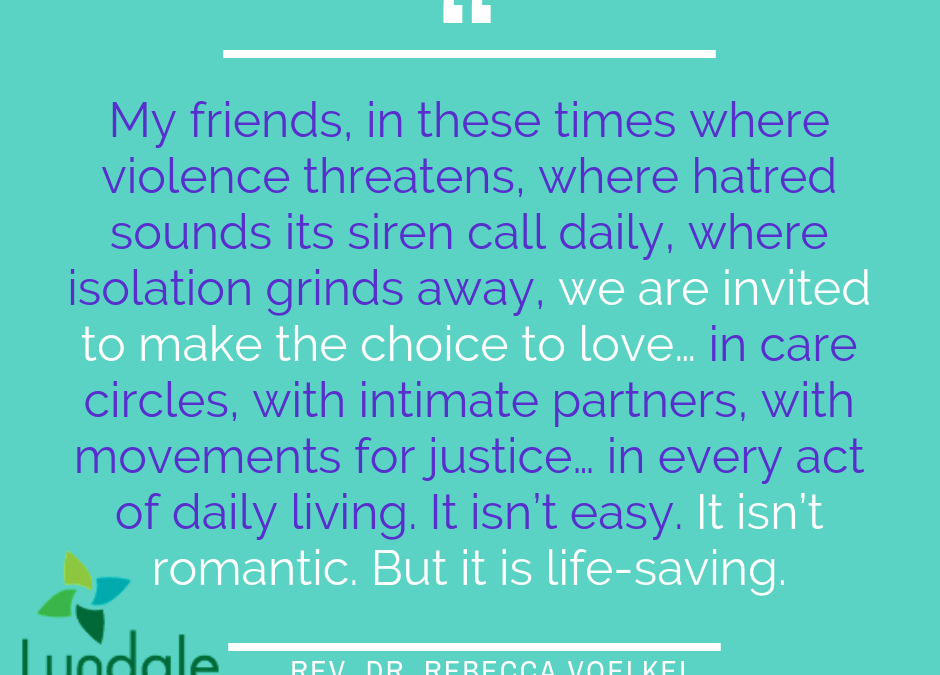 Holy One, breathe on us in this time and space. And may the words of my mouth and the meditations of all of our hearts be glimpses of Your spirit. Amen.

Love is patient. Love is kind.

The conversations started years earlier, not long after her diagnosis with MS. And they continued as it became clear that her type of the disease was the chronic progressive kind, as she went from walking with a cane to using a manual chair to using an electric scooter to using a fully mechanized wheelchair.

If I have prophetic powers, and understand all mysteries and all knowledge, and if I have all faith, so as to remove mountains, but do not have love, I am nothing.

At first it was like paddling downstream in a gentle easy current. Everything they talked about surprised and amazed them. “I can’t believe that’s what you think… I have ALWAYS thought the same thing.” “Oh, my gosh, I love that you love to do that, me, too!” It was as if they finally found someone who “fit” them. The laughter, the jokes, the physical ease with each other. They couldn’t quite believe it.

Love is not envious or boastful or arrogant or rude. It does not insist on its own way…

The conversations continued through the reality that her MS lesions were in the pain centers of her brain and literally nothing could touch the fact that it felt like her legs were on fire. “What does all of this mean?” she would ask. “Will you stay with me? Will you pray with me? Will you help me as I’m living and when it’s time to die?” “Yes, of course” I kept saying—as a twenty-two year old and a twenty-four year old and a twenty-eight and 30 and 35 year-old, not really knowing the weight and import of her questions.

They continued on in this way for the first couple of years of their marriage—ease, connection, knowing. But as they moved into their third and fourth years, it started to seem as if their perfect fit was starting to slip, as if the record player was skipping out of the groove. They no longer finished each other’s sentences, in fact, they started to struggle to communicate. “No, that’s not what I meant. Why do you assume that about me?”

[Love] is not irritable or resentful; it does not rejoice in wrongdoing, but rejoices in the truth.

“This is Harvey Milk speaking on Friday November 18, 1978. This tape is to be played only in the event of my death by assassination. …I fully realize that a person who stands for what I stand for—an activist, a gay activist—becomes the target or potential target for a person who is insecure, terrified, afraid or very disturbed…. Knowing that I could be assassinated at any moment, at any time, I feel it’s important that some people know my thoughts, and why I did what I did. Almost everything that was done was done with an eye on the gay movement. …I cannot prevent some people from feeling angry and frustrated and mad in response to my death, but I hope they will take the frustration and madness and instead of demonstrating or anything of that type, I would hope that they would take the power and I would hope that five, ten, one hundred, a thousand would rise. I would like to see every gay lawyer, every gay architect come out, stand up and let the world know. That would do more to end prejudice overnight than anybody could imagine. I urge them to do that, urge them to come out. Only that way will we start to achieve our rights. … All I ask is for the movement to continue, and if a bullet should enter my brain, let that bullet destroy every closet door…”

This morning, the Lectionary invites us to take a look at I Corinthians 13. It’s a familiar text to many of us as it is so often chosen for weddings. But it seems particularly poignant and powerful to read it today, in the same week as the Jussie Smollett beating and the reunion of the 18 month old Honduran child who’d been forcibly separated from her parents at the border and the latest suicide bombing… and on the Sunday following Kayla’s death.

Although I Corinthians 13 is often read amidst an overly naïve, romanticized bubble that too many weddings are, it is by no means romantic nor naïve.

First of all, the whole letter that Paul writes to the church at Corinth is focused on the conflict and power dynamics that are tearing the community apart. Specifically, I Corinthians 13 comes after I Corinthians 11 and 12. In I Corinthians 11, we learn that some members of the community are coming to worship very hungry because they don’t have enough food to eat and others are very wealthy with a surplus. But instead of sharing their wealth, the rich members of the community hoard what they have. Paul is very angry that this kind of wealth inequality isn’t addressed before folx share in communion. The sacred meal, one that is supposed to be an embodiment of our radical equality before God, is being perverted, Paul warns. And then, in I Corinthians 12, he again addresses a community that seems to think that some are better than others, or more deserving, or some are feeling less deserving.

This is the context into which the thirteenth chapter of the letter comes. Any consideration of love comes amidst a keen awareness of power and the systems and structures of community which value and honor all people.

So, into this context, the thirteenth chapter challenges us with love. But the word in Greek that is used in this text is agape… a kind of love that is particularly generous, giving and sacrificial and, as one source suggests, takes some amount of will. Carter Heyward defines it this way: Love is a choice—not simply, or necessarily, a rational choice, but rather a willingness to be present to others without pretense or guile. Love is a conversion to humanity—a willingness to participate with others in the healing of a broken world and broken lives.

This kind of love is not easy. In fact, it is determined, focused, purposeful. And, when it is woven with an understanding of power and relationships from the previous chapters of the letter, it might most properly be understood as justice-love.

Those conversations I had where I promised my friend, Amy, I’d be with her in all of her living and dying, have been very close to my heart as I’ve watched Kayla’s care circle journey with her over these past four months. The level of exhaustion and pain, the willingness to bear witness to so much that was beyond their control, the vulnerability of not knowing but being present, of listening, of touching, of opening their hearts. They have been an embodiment of the choice to love.

The marriage whose connection frayed eventually ended. But not before there had been exquisitely honest and beautiful conversations. They listened and heard, struggled to describe who they understood themselves called to be. They honored and grieved what had been and let each other go. They, too, are an embodiment of the choice to love.

And Harvey Milk. What to say about such a person? As a Jew and an artist, as a politician and an activist, he gave his life for his friends. His was a lifetime of making the choice to love.

My friends, in these times where violence threatens, where hatred sounds its siren call daily, where isolation grinds away, we are invited to make the choice to love… in care circles, with intimate partners, with movements for justice… in every act of daily living. It isn’t easy. It isn’t romantic. But it is life-saving.

So faith, hope, and love, these three… and the greatest of these is love.