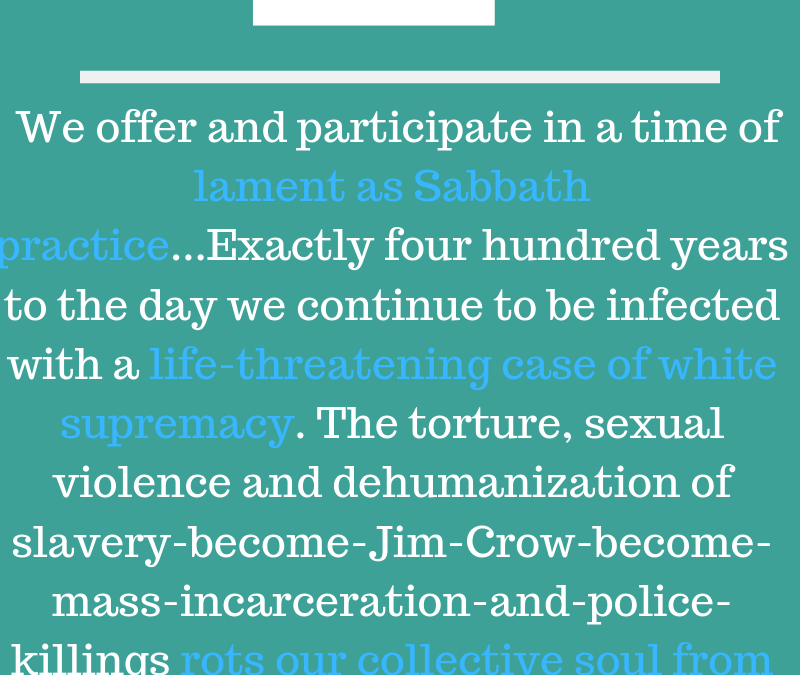 We have spent this summer at Lyndale reflecting on Sabbath, through various lenses, and today we focus on Sabbath as lament. Rebecca and I felt called to this reflection after a meeting with indigenous leader, organizer, and activist Jim Bear Jacobs. In the meeting, Rebecca, Jim Bear, myself, and other local organizers were discussing the practice of reparations, and specifically in this case, compensation given from white people to indigenous people in recognition of the violence and devastation of colonization. Jim Bear noted that when many white people and organizations – including churches and other religious communities – make reparations, we do so from primarily a lens of action, responding by donating money, participating in protests, or lobbying for political change.

While these actions are necessary and important, Jim Bear commented that another aspect of reparations was needed from white folks: lament, or grief, or taking time to be sad about the violence and harm we have caused and experienced. Although a turn to action is not wrong, sometimes, he noted, we turn to action as a way of avoiding or minimizing emotions of sadness, responsibility, or heartbreak, because they are painful. True reparations, he said, necessitated both concrete and emotional compensation.

So today, at Lyndale, we all offer and participate in a time of lament as sabbath practice, grieving the violence and harm we have caused and experienced. We do this following in the form of the ancient lament psalms, such as Psalm 22, which we will read today. Psalm 22, like most lament psalms, contains three sections: a section of lament, a section of reaching out to God, and a section of thanksgiving. The service is structured around those three parts. We will read a section of Psalm 22, offer a reflection on it, and offer a sung response; we will do this twice. The third time we read a section of Psalm 22 we will respond with a ritual, with Rebecca will explain later.

We acknowledge and celebrate that every one of us comes from a different place today, emotionally, physically, spiritually, and mentally. While some of us may be firmly rooted in lament and grief, others may be feeling more connected to reaching out to God, or to moments of thanksgiving. We invite you, wherever you are coming from, to allow yourself to fully enter that part of the service which most speaks to you, and to offer support and care to the community around you as they do the same. Let us hold each other in lament, prayer, and thanksgiving today.

As Allison shared, the Bible has several Psalms of Lament. Our Psalm for this morning is one of them. In each of these Psalms of Lament, we begin in a place of sorrow, of anxiety, of lamenting the pain that surrounds us.

There have been almost 75,000 fires in the Amazon Rainforest this year… many are burning as we speak … The lungs of the planet, as the rainforest is known, are on fire. The skies are black in Rio de Janeiro with its smoke. I can’t begin to describe the panic I feel. As someone with asthma, I feel a kind of cellular connection with trees. It’s as if my soul can feel the oxygen they are sharing with me. I know I need them. And with twenty percent of the world’s oxygen coming from the Amazon Rainforest, I know we all need the forest. But it’s burning…our planet’s lungs are on fire…

And yet Brazil’s president Bolsonaro, who’s known as the Trump of the Tropics, has gleefully talked about displacing the indigenous peoples of the rainforest and speeding the bulldozing of the forest…

My God, my God, why have you forsaken us?

It was August 25, 1619 and the place was Point Comfort, VA. As the record states, “20 and odd Africans” were sold into slavery, the first in what is now the United States. Exactly four hundred years to the day later we continue to be infected with a life-threatening case of white supremacy. The torture, sexual violence and dehumanization of slavery-become-Jim-Crow-become-mass-incarceration-and-police-killings rots our collective soul from the inside out.

And yet, our President declares there are good people on both sides… and seeks to create indefinite detention for asylum-seeking families… and calls himself the Chosen One…

O my God, we cry by day, but you do not answer; and by night, but find no rest.

He looked around and it seemed as if his community was slipping away. His wife of nearly fifty years died almost a decade ago. His son got sick and died almost five years ago and his soul-friend, the one he prayed with weekly died last year. He tried to focus on their presence with him but too often it just seemed overwhelming.

I am poured out like water, and all my bones are out of joint; my heart is like wax; it is melted within my breast; my mouth is dried up like a potsherd, and my tongue sticks to my jaws; you lay me in the dust of death.

As Mary sings, we are invited into a time of silent reflection on those things for which we lament, which grip our hearts with anxiety, which threaten to pull us into the depths of despair. You are invited to write on the paper provided or simply sit and pray.

Second Movement: Reaching Out to God

An Ask to God Regarding Institutions:

Oh God, there is so much to lament, and so much for which to ask. You have seen, as I have seen, the weeks and months and years of mass shootings, shootings committed by white, cisgender, straight, able-bodied men. You have read, as I have read, that those men were so often explicitly fueled by an agenda of white supremacy, misogyny, nationalism, and fear; and you know, as I know, that white supremacy, misogyny, nationalism, and fear are not criteria for mental health diagnoses, they are the result of the unchallenged hatred of the “ other” on which our country operates and on which our country was founded. And yet, you have heard, God, as I have heard, the calls of lawmakers following those shootings, calls not for gun legislation or reform, but calls for reopening so-called “mental institutions.”

You alone know the future, oh God, but we together know the past, and we know that mental institutions have kept nobody safe, God; they protect neither those on the outside nor those on the inside from the violence of systemic hatred. We together know that the answer to gun violence and mass murder is not to lock more people up, God, not to keep more people separate from each other, but to unite all in the radical and liberating love that is possible when we understand the presence of the Divine in each person. And so, oh God, we lament: we lament all the strains of evil that we encounter in our world; strains too many to list in one sentence, in one sermon, in one lifetime. And oh God, we ask: we ask for the healing we seek, the healing we know is possible, the healing we have witnessed, the healing we deserve, the healing for which we long.

I was raised to be a do-er, an act-or, one who analyzed a situation and then acted in a way that would make it better. I had a United Church of Christ bumper sticker in my room for years that I loved, that seemed to sum up so much of my faith. It read, “To believe is to care, to care is to do.”

As my first marriage crumbled, I tried absolutely everything: therapy, journaling, naming and claiming all my faults, apologizing, practicing new patterns and habits, spending time, giving space… nothing worked. With every action I took, I was met with anger and annoyance. It was as if I was in quicksand and every move sank me deeper in the morass of pain. I can still feel the sense of shame that gripped me. My failure was palpable…

I have a very clear memory in my head of the time I finally broke down or broke through. I was in the fetal position on the carpeted floor in my office. I had never felt so alone, nor so helpless. And all I could do was cry and moan and ask, why, God, why, God, why, God? And somewhere out of my tears, I started singing Amazing Grace.

Amidst our lament, let us reach out to God in song…

Particularly in these times, when there are so many things to lament—in our world, in our communities and in our personal lives, we want to take time to lift up our prayers to God.

This morning, we have candles for our prayer time. If you’d like to come forward and light a candle and offer a prayer—of lament, of thanksgiving, of all of it wrapped together, please feel free. We will sing together as the candles are lit. If you’d like to name out loud what you’re praying for, please do so. If you’d rather just light a candle and pray in your heart, please do that. If you need someone to bring you a candle in your seat, please signal to me or Allison.

Let us be in prayer together…