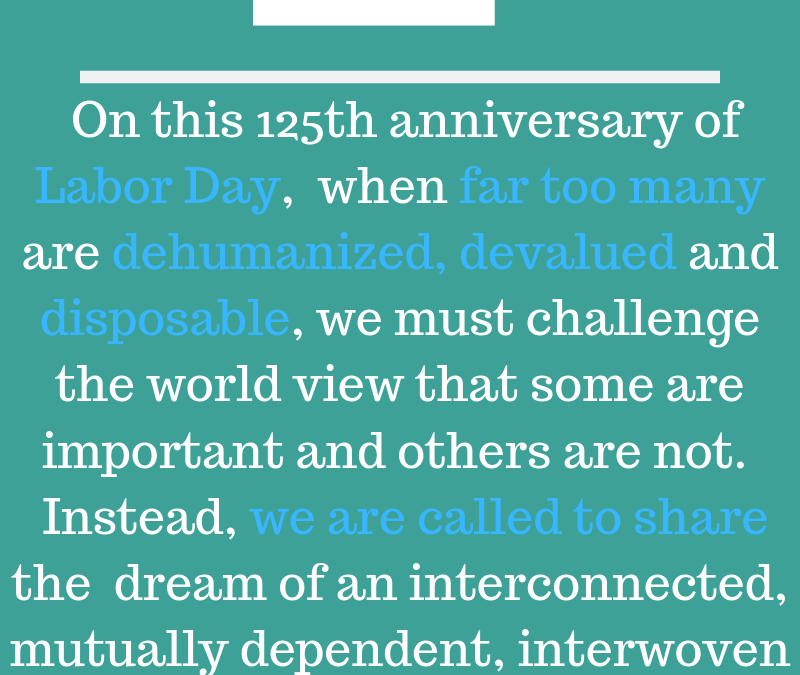 Holy One, you whose spirit infuses every breath we take; You whose love is like sinew that connects every part of creation; You whose Body is composed of the entirety of the Universe, we give you thanks and praise. And in this moment, we ask that you bless our storytelling and our praying and our ritualizing—that we might more faithfully embody your wisdom and your dreaming. Amen.

My grandfather was John Leishman Unwin. He was born in a little coal mining town near Glasgow, Scotland called Twechar. I know I’ve told you some things about him. But, on this 125th Anniversary of Labor Day weekend, I have been thinking about him a lot because the stories that have been told to me about him are all completely connected to the Labor Movement.

Because he was born into a poor family in Scotland, he only went to school until the 3rd grade. Then, he went to work in the mines at 10 years old. He left Scotland as soon as he could to emigrate and he never went back. He was incredibly resentful of the caste system in Scotland that treated people like Kleenex, as he would say. Some were throw-away people. He thought this because of his own experience of having survived being buried alive in the mines at fourteen. He knew what it meant to have his life be disposable.

So he came to this country in the 1920’s and was very active in the Labor Movement because he wanted to make sure that workers were valued as human beings, that no one was disposable. The president of the United Mine Workers here in the US was John L. Lewis and he was sometimes known as the Great John L. Well, my grandfather was John Leishman Unwin and his friends, would also call him the great John L. He took it as the greatest of compliments.

My grandfather was a laborer his whole life. His longest job was for the Industrial Rayon Corporation where he was exposed to a lot of toxins. And it was that same Industrial Rayon Corporation that closed the plant where my grandfather worked, drained his pension and laid everyone off. To this day, my mother blames that experience for the cancer that killed him two years later, at age 56.

Although he spent his whole life seeking to support unions and workers’ rights, to ensure that no one was disposable, far too much of his life was spent at the wrong end of corporate greed.

On this Labor Day, I return thanks for all who labor—and especially my grandfather.

Our Scripture for this morning similarly challenges the world view that some are important and others are not. It similarly debunks the Kleenex culture in which my grandfather lived and that still infects our lives today.

Indeed, the body does not consist of one member but of many… God arranged the members in the body, each one of them, as God chose. If all were a single member, where would the body be? As it is, there are many members, yet one body. The eye cannot say to the hand, “I have no need of you,” nor again the head to the feet, “I have no need of you.”

This text is one of my favorites.

And it was one offered by Interfaith Worker Justice as we celebrate Labor Day. It is a beautiful dream of an interconnected, mutually dependent, interwoven community whose respect and love and honor of one another means that it moves in the world as one body—the Body of Christ.

I find it a salve and powerful medicine in today’s context in which far too many are dehumanized, devalued and disposable.

This morning, we are going to take a few moments to ritualize this powerful scripture on this 125th anniversary of Labor Day. We’re going to invite all of us who feel moved to come forward, one by one, and lay your symbol of work or vocation on the altar and share a sentence or two about what you are called to do and be in the world or for what you labor. If you haven’t brought a symbol but still would like to tell us what your vocation is, please come forward.

We do so to honor each of us, each part of the Body of Christ here at Lyndale. But we also do so as one small way to remind ourselves of our interconnectedness and interdependence with all of our kindred around the world and with all of creation. We need one another.

So let us bless our interconnections that we might move in the world in ways that deeply honor all of creation.