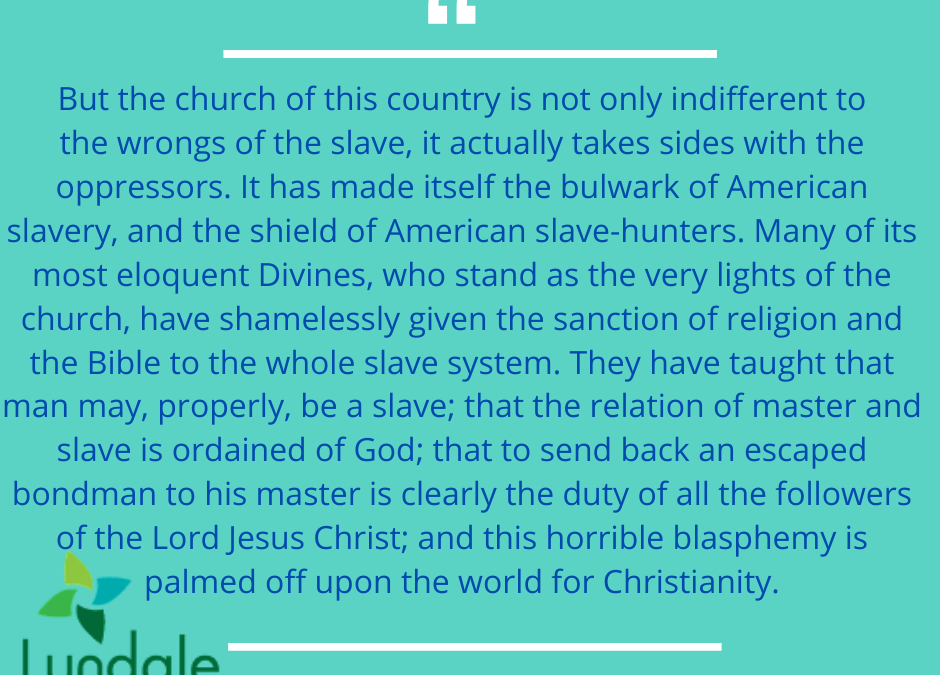 Well, I went and did it: I picked the Sunday of 4th of July weekend to preach.  Of all the fraught holidays during these challenging and momentous times.  Fraught, yes, but still filled with warm childhood memories, I must confess.

Every 4th of July during our young childhood years, after the evening milking chores were finished, we would head to Westby, the Norwegian capital of southwestern Wisconsin, to celebrate our cousin’s birthday.  Yes, Janet is a July 4th baby and her Grandma and Grandpa Tryggestad hosted the festivities during those years.  They lived next to the Westby High School sports field, where the village held their fireworks show.  So, there was that too, in addition to the birthday party!  It was a few years before I realized that the show wasn’t for Janet’s birthday.  And, we kids – my cousins, siblings, and I – innocently played, reveled with sparklers, and “oohed and ahhed”.

We were part of the youngest edge of the Baby Boom generation, but we were still largely “asleep” to and ignorant of the real America.  The one that was being papered over and white-washed with these 4th of July celebrations.  Our incomparable generation was and is “like children sitting in the marketplace and calling to one another, ‘We played the flute for you, and you did not dance; we wailed, and you did not mourn’”.

And, we were blithely unaware and untaught about how “our” America was built and continues to be built on the oppressed and broken bodies of our black, brown, and native neighbors.  It would be many years before I would experience the raw, prophetic, and “unsanitized” words of these neighbors and the untold history of the real America.

Such as these words from Frederick Douglass, in his What To The Slave Is The Fourth of July? speech in 1852:

“What, to the American slave, is your 4th of July? I answer: a day that reveals to him, more than all other days in the year, the gross injustice and cruelty to which he is the constant victim. To him, your celebration is a sham; your boasted liberty, an unholy license; your national greatness, swelling vanity; your sounds of rejoicing are empty and heartless; your denunciations of tyrants, brass fronted impudence; your shouts of liberty and equality, hollow mockery; your prayers and hymns, your sermons and thanksgivings, with all your religious parade, and solemnity, are, to him, mere bombast, fraud, deception, impiety, and hypocrisy — a thin veil to cover up crimes which would disgrace a nation of savages. There is not a nation on the earth guilty of practices, more shocking and bloody, than are the people of these United States, at this very hour.”

And, Mr. Douglass continued later in his speech with this indictment:

“But the church of this country is not only indifferent to the wrongs of the slave, it actually takes sides with the oppressors. It has made itself the bulwark of American slavery, and the shield of American slave-hunters. Many of its most eloquent Divines. who stand as the very lights of the church, have shamelessly given the sanction of religion and the Bible to the whole slave system. They have taught that man may, properly, be a slave; that the relation of master and slave is ordained of God; that to send back an escaped bondman to his master is clearly the duty of all the followers of the Lord Jesus Christ; and this horrible blasphemy is palmed off upon the world for Christianity.

For my part, I would say, welcome infidelity! welcome atheism! welcome anything! in preference to the gospel, as preached by those Divines! They convert the very name of religion into an engine of tyranny, and barbarous cruelty, … They strip the love of God of its beauty, and leave the throng of religion a huge, horrible, repulsive form. It is a religion for oppressors, tyrants, man-stealers, and thugs. It is not that “pure and undefiled religion” which is from above, and which is “first pure, then peaceable, easy to be entreated, full of mercy and good fruits, without partiality, and without hypocrisy.” But a religion which favors the rich against the poor; which exalts the proud above the humble; which divides [hu]mankind into two classes, tyrants and slaves; which says to the [one] in chains, stay there; and to the oppressor, oppress on; it is a religion which may be professed and enjoyed by all the robbers and enslavers of [hu]mankind; it makes God a respecter of persons, …  In the language of Isaiah, the American church might be well addressed, “Bring no more vain ablations; incense is an abomination unto me: the new moons and Sabbaths, the calling of assemblies, I cannot away with; it is iniquity even the solemn meeting. Your new moons and your appointed feasts my soul hateth. They are a trouble to me; I am weary to bear them; and when ye spread forth your hands I will hide mine eyes from you. Yea! when ye make many prayers, I will not hear. YOUR HANDS ARE FULL OF BLOOD; cease to do evil, learn to do well; seek judgment; relieve the oppressed; judge for the [orphan]; plead for the widow.”

Wow!  A regular 19th century John the Baptist.  And, received with mixed reviews, I’m sure.   And, as we heard earlier in the Gospel reading, John himself was accused of “having a demon”.  Other prophets and justice leaders in our time have met with similar accusations and smears.  Dr. Martin Luther King, under surveillance by the FBI, was labeled a communist and a traitor.  Black Lives Matter activists are called “terrorists”, even by government officials.  And Jesus, in Matthew 11, heard what people were whispering and talking about him: “a glutton and a drunkard, a friend of tax collectors and sinners!”

Jesus and his disciples had indeed tasted the bitter cup of rejection rather than welcome, according to Matthew, as they sought to bring healing, new life, and the message of justice and good news for the poor to towns and villages of Chorazin, Bethsaida, and Capernaum.  In the section that the Lectionary reading skips over, Jesus calls these places out, saying “Woe to you”.  They had closed their hearts and minds to this good news.  Perhaps it was too new and revolutionary for them.  It meant they couldn’t continue to live and act the way they always had.  It might upset the power structure that made them comfortable, if the poor and downtrodden started to live out and fight for this good news.  Maybe that’s why many of us would like to go back to the way things were before COVID-19, go back to “normal”, go back to the seemingly easy complacency before the uprisings of the past several weeks.  But, was it truly easy?  For some, perhaps, but for many, many, a very heavy burden.  A yoke that pushed down, held back, and even killed.

Thankfully, Jesus offers a better way.  A way that reshapes the law to serve humanity and not the other way around.  A way the summarizes our religious faith and duties under the law of loving God and loving our neighbors as ourselves.  He offers this:

“Come to me, all you that are weary and are carrying heavy burdens, and I will give you rest. Take my yoke upon you, and learn from me; for I am gentle and humble in heart, and you will find rest for your souls. For my yoke is easy, and my burden is light.”

Even the fiery Frederick Douglass offers us this hope, both for his time and for our own times as well, as we struggle to resist and topple white supremacy:

“Allow me to say, in conclusion, notwithstanding the dark picture I have this day presented of the state of the nation, I do not despair of this country. There are forces in operation, which must inevitably work the downfall of slavery. “The arm of the Lord is not shortened,” and the doom of slavery is certain. I, therefore, leave off where I began, with hope. While drawing encouragement from the Declaration of Independence, the great principles it contains, and the genius of American Institutions, my spirit is also cheered by the obvious tendencies of the age.

In the fervent aspirations of William Lloyd Garrison, I say, and let every heart join in saying it:

God speed the year of jubilee

When from their galling chains set free,

And wear the yoke of tyranny

That year will come, and freedom’s reign,

To [all their] plundered fights again

Shall cease to flow!

In every clime be understood,

The claims of human brotherhood,

And each return for evil, good,

Not blow for blow;

That day will come all feuds to end.

And change into a faithful friend

When none on earth

Shall exercise a lordly power,

Nor in a tyrant’s presence cower;

But all to [human] stature tower,

That hour will come, to each, to all,

And from [her] prison-house, the thrall

Until that year, day, hour, arrive,

With head, and heart, and hand I’ll strive,

To break the rod, and rend the gyve,

The spoiler of his prey deprive —

Whate’er the peril or the cost,

And as Dr. King paraphrased the 19th century abolitionist minister, Theodore Parker: “The arc of the moral universe is long, but it bends toward justice”.

I hope and pray that this continues to be true.  One small hope for me is, that 50 some years after my childhood memories of the 4th of July in Westby, WI, and just down the road in my hometown of Viroqua, over 250 people marched on both sides of Main Street and took a knee one week after the killing of George Floyd.  They were protesting against police brutality and white supremacy, announcing in posters and shouts that “Black Lives Matter”.