Invited to the table of the disabled God 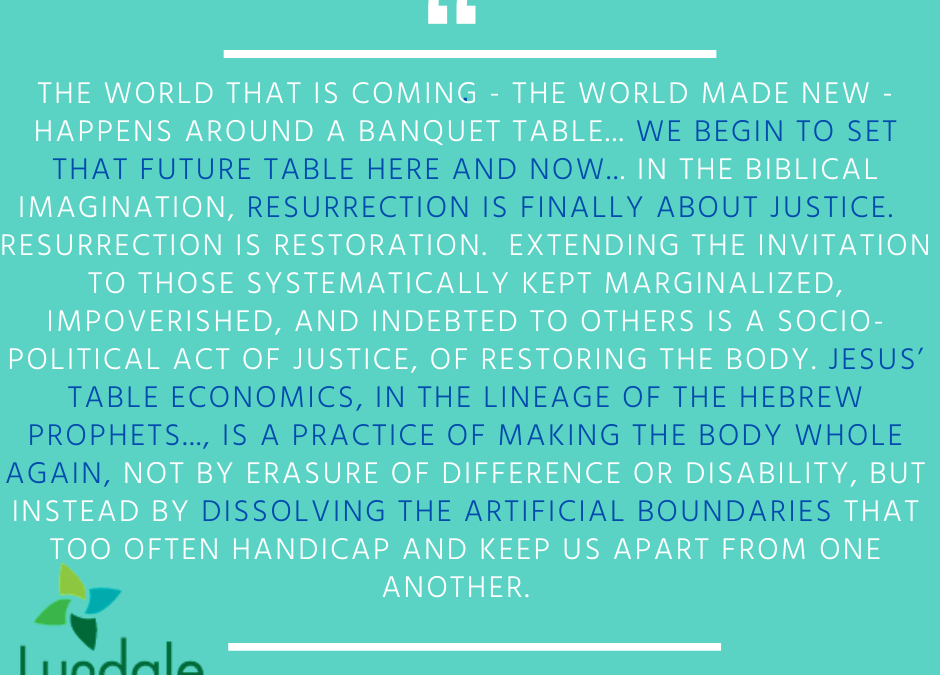 Reflecting on it today, at Faith Kitchen, we weren’t as much serving a meal to others as we were preparing for another kind of world together.

Beforehand, there were no lines that formed inside or out. Instead, folks would make their way directly downstairs to the small church basement and there find a table at which to sit. When the food was ready, it was my job to call up each table, one by one, to the front of the room where folks would be served—first, soup and some kind of appetizer, and then, the second time through, the main meal. On special nights, every few months or so, a celebrated local restaurant would cook up the meal—but even on normal nights our volunteer head chef Betsy prided herself on what kind of gourmet fare she could make out of the food bank’s latest offerings.

Long before I was taken in by the community, Faith Kitchen had begun as a collaboration between the church who hosted it, a small Lutheran congregation in Cambridge, Ma. and its synagogue neighbors around the block. By the time I got involved, however, folks came from all over the neighborhood, whether or not they were associated with either spiritual community, or any spiritual community for that matter. Various people show up before the meal—to set tables, put on the coffee, or help cook. Others show up just in time to help spoon generous helpings of food onto others’ plates.

The fact is that charitable groups serve up meals like this all over the world. And yet I learned very early on in my time with Faith Kitchen that there is something distinctly transformative happening on those Wednesday nights in Cambridge. Because it’s often not entirely clear who is there to serve or be served. It’s not always clear who needs that meal more than any other. Because when all the tables have been called up, those who have stood serving then grab a bowl of soup and plate of food themselves and proceed to find a seat beside everyone else. No retreat for some to the kitchen or another room. Everyone sits down together at the same tables. Indeed, some who have come early to put the tablecloths on, dish up food, or make that pot of coffee may very well be homeless or housing-insecure themselves—this meal may very well be their most complete meal that day—and regardless, whoever you are, it’s undoubtedly the best meal you’ve eaten all day! You just don’t know who are the hosts and who are the guests. Everyone is fed at Faith Kitchen. Every hunger is satisfied.

At first, Jesus’ parables and the teachings he shares at the table of a leading Pharisees in Luke’s gospel might sound like little more than virtuous talk about the benefits of being a humble and charitable human being. “When you have a dinner party, invite those who are poor or disabled or blind,” Jesus tells them. Earlier in my life, I would have surely heard this as Jesus telling me,

Be good like that and heaven awaits! In such a reading of the gospel story, the lesson becomes one about the virtues of service.

Surely, much good has been done in our world through acts of caring for and supporting those marginalized, including people with disabilities. And at the same time, christian systems of charity have sometimes neglected the demands for justice that are also foundational to the biblical witness. As Professor Nancy L. Eiesland (of blessed memory, d. 2009) explains, the plethora of faith-based hospitals, clinics, and programs for those with disabilities has oftentimes in actuality led to their exclusion from the larger socio-political communities of which they, and all of us, are a part.

In Luke’s gospel, Jesus is not talking about charity in this way; he’s talking about restoration to right relationship. On a closer reading of the gospel, there are details in this story that suggest something distinctively eschatological or world-transforming about the table being set before us. As New Testament scholar, Amy-Jill Levine explains, in first-century Jewish cosmologies, the world that is coming – the world made new – happens around a banquet table. Importantly, according to this understanding, we begin to set that future table here and now.  The saying is attributed to another teacher roughly contemporaneous to Jesus, Rabbi Jacob: “This world is like a vestibule before the world to come: prepare yourself in the vestibule that you may enter into the banqueting hall”. In other words, for Jesus and for those other guests welcomed into that Pharisee’s home, every table could be a foretaste of the world to come. Jesus himself makes the direct connection between this world, in which he calls us to sit down at the table together with those who are poor or disabled or blind, and a world-to-come, in which those who lived and died according to the ways of justice are raised again. Others who ate with Jesus at that table in first-century Palestine surely recognized this transformative connection, for Luke tells us that when one of the other dinner guests had heard Jesus, they exclaimed in reply, “Blessed are those who will feast in God’s kin-dom”.

In the biblical imagination, resurrection is finally about justice. Resurrection is restoration. Extending the invitation to those systematically kept marginalized, impoverished, and indebted to others is a socio-political act of justice, of restoring the body. Jesus’ table economics, in the lineage of the Hebrew prophets before him and since, is a practice of making the body whole again, not by erasure of difference or disability, but instead by dissolving the artificial boundaries that too often handicap and keep us apart from one another. As disability justice movements remind us, real bodies are always “bodies of contingency and limits”. To be able-bodied in this world is always only temporary.  We need each other, not in the ways of pity or paternalism but rather in the ways of kinship and kin-dom.

Beside one another at the table of God, it’s not altogether clear who needs it more. There are no hosts or guests at that table. Theologian Nancy L. Eiesland suggests that far from holding out before us a perfected and idealized body, the stories of Jesus’ resurrection actually orient us towards the realities of a disabled God and their incarnation in our complex and profoundly ambiguous bodies. The gospel stories emphasize again and again that Jesus’ disciples could only recognize who Jesus actually was through the lens of resurrection. “In the resurrected Jesus Christ,” Eiesland writes in her book The Disabled God, “they saw not the suffering servant for whom the last and most important word was tragedy and sin, but the disabled God who embodied both impaired hands and feet and pierced side and the imago Dei [the image of God]”. The resurrected Jesus, always and ever bearing his wounds and impairments, shows us a “body reshaped by injustice and sin into the fullness of the [God]”.

Jesus said to the one who had invited him to that feast, “When you host a meal, don’t invite your friends or siblings or relatives or rich neighbors… Instead, when you have a dinner party, invite those who are poor or disabled or blind. And you will be blessed”.

The blessing that Jesus was talking about was never simply feel-good charity or self-negating altruism. What Allison so beautifully framed for us weeks ago as the “miracle of interdependence” is, as Nancy Eiesland puts it, a “fact of both justice and [our common] survival”. When we sit down at the same table, the truth is that we aren’t purely serving others over and against ourselves; instead, we are preparing for another kind of world together.

Perhaps the complexities of real bodies sitting at real tables means that our blessings are always mixed blessings. The resurrected and impaired Christ meets us in our bodies and our lives as they really are. The table for the world to come can only be set in the world we already inhabit. Those who live within the limitations and possibilities of poverty or disability invite all of us into the gift and grace that happens when we dare to share our wounds and our impairments.

Only in our kinship with one another can we behold our own healing and wholeness. In such a kin-dom, at such a table, we are held by the disabled God.