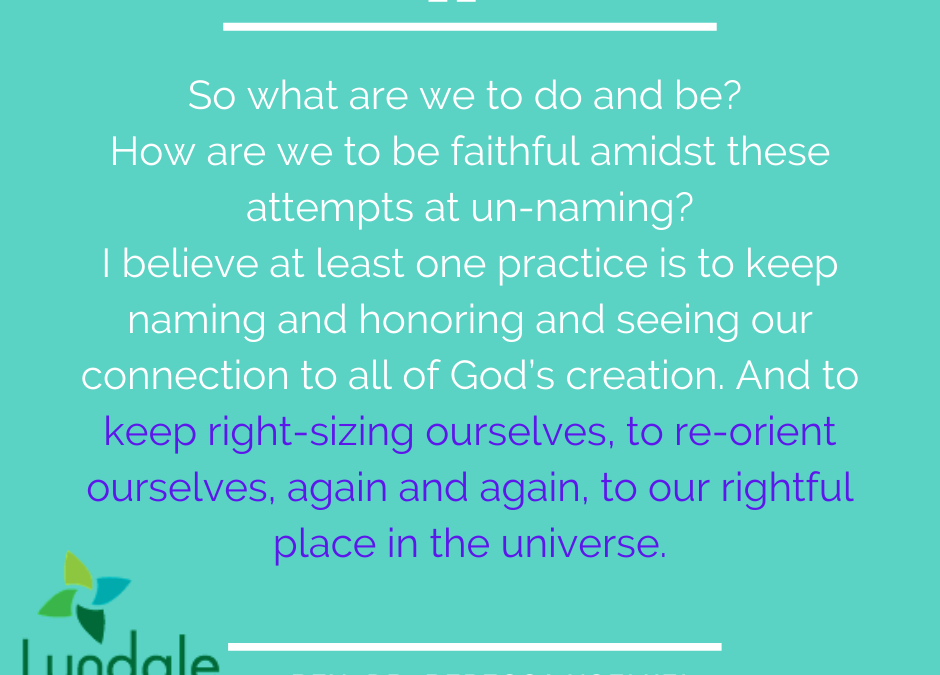 Scripture: Psalm 139 and excerpt from A Wind in the Door

For the past week, I’ve been thinking a lot about the trip that Maggie, Shannon, my mom and I took to Scotland exactly four years ago. We had gone to visit the land of our MacKenzie ancestors and the trip was truly sacred.  But one day remains particularly important.

We had taken a boat from the Isle of Mull, one of the Inner Hebrides Islands to a small, uninhabited island called Staffa. The ride over was on a fast boat in which we bounced amidst small waves and intermittently got sprayed as the wind blew the wake into our faces. It was a rare sunny day and we held on and rhythmically bounced as you would on a cantering horse. Shannon stood encircled in my arms and we both gazed out at the Hebridean sea and the islands not too far away. My mom said later that she watched us from inside the cabin and we looked like we were in our glory. When we got to Staffa, we disembarked and hiked amidst the purple heather and looked over the volcanic cliffs at Iona and back to the Isle of Mull. I wish I could describe the combination of the smell of the saltwater air, the feel of the wind and sun on our faces, the sight of sea and heather-covered, mountainous islands with puffins flying and diving and the energy that I can only explain as sacred.

When Shannon was asked how the day was on a scale of 1-10, she responded, “Infinity.” Because I could have had a similar reaction, I think I know what she meant. The pictures of us show us all grinning from ear to ear. The same is true as we made our way to Iona and walked through the ancient abbey there. As I’ve closed my eyes and remembered that day and as I’ve looked back at pictures, I think our experience might have something to say as we seek to practice Holy Groundedness: Connection with Creation.

That day amidst the sea and the wind and the stones and the heather, I think we all had an experience of simultaneously feeling very small amidst an awe-inspiring universe, very momentary in a place whose ancient history was almost palpable AND completely held and known and named in our beings. Our Jewish kindred call it the spiritual practice of right-sizing. We were neither too big, nor too small. We were inhabiting our rightful place in God’s creation. We knew who and whose we were.

I think the Psalmist might have been talking about this when they wrote:

O Lord, you have searched me and known me.
You know when I sit down and when I rise up; you discern my thoughts from far away.
You search out my path and my lying down, and are acquainted with all my ways…

How weighty to me are your thoughts, O God!
How vast is the sum of them! I try to count them—they are more than the sand;
I come to the end—I am still with you.

Episcopal novelist, essayist, and theologian Madeleine L’Engle deals a lot with this understanding of right-sizing and our human place amongst God’s creation. One of the ways she talks about it is with the language of “naming.” She believes that God’s act of creation, of love, of liberation is one of ongoing naming. She further believes that there is a resonance, a rhythm, a dance, an energy that is knit throughout creation. And she believes that one of the ways that creation can respond to God’s naming is to listen for the song that the stars sing and to respond in-kind. She writes:

I  fill  you with Naming.

This naming and responsive singing and dancing, contrasts with L’Engle’s image of how sin operates in the world. For L’Engle, sin seeks to un-name, to take away being, to remove significance.

I find this understanding so very helpful, particularly as a Christian who is witness to the drought here in Minnesota even as Enbridge is poisoning billions of gallons of water for its drilling into aquifers… who is witness to the politicization of Covid amidst the rise of the Delta and the Delta Plus variants. So much of what is happening in our world is seeking to interrupt, break, or destroy God’s presence in and relationship with and among creation by un-naming, taking away being, or removing the significance of our waters, of manoomin, of treaties, of those who aren’t white, who aren’t citizens, who aren’t Christians.

And so much of it is rooted in a deep misunderstanding of our place in the universe.

On Tuesday, Shannon and I joined about a dozen friends from Robbinsdale-Parkway UCC at the Shell River Camp that is trying to name and honor and be in relationship with the waters and the manoomin in Northern Minnesota. At the end of the day, we went to Enbridge’s headquarters in Park Rapids for a protest of dancing and singing and holding up beautiful signs. Winona LaDuke was there and as one car passed and a man hung out the window and swore and literally was frothing at the mouth at us, she said, the ways in which late-stage capitalist addiction to oil makes us crazy is palpable, no? That addiction makes us think we have the right to poison the water and take all that we want. It dis-orients us and makes us believe we are god.

So what are we to do and be? How are we to be faithful amidst these attempts at un-naming?

I believe at least one practice is to keep naming and honoring and seeing our connection to all of God’s creation. And to keep right-sizing ourselves, to re-orient ourselves, again and again, to our rightful place in the universe.

So I invite you into a brief space of right-sizing practice:

feel your skin…your bones… your digestive and circulatory systems…

Now pay attention to the mitochondria that make up each of our cells… there are about 2500 mitochondria in every cell.

You represent the cooperation and reciprocity of each of these: from the smallest microscopic mitochondria to ever larger collaborations between tissue and organ systems and skin and bones.

As you are aware of the reciprocity of all that makes you, you… now draw your attention to your body amidst other bodies… If you are sitting in Elly’s garden, pay attention to the other people sitting near you… if you are at home, is there anyone near you? What about your neighbors? … think about each of them and the systems of reciprocity that make them who they are…

Draw your attention to the trees, like cathedral pillars… what about any flowers or plants nearby… look at their color and shape… how many thousands of cells comprise each leaf? How much oxygen does each exude that you are breathing in? How much cardon dioxide does each plant breathe in that you have just exhaled?

Draw your attention to the earth on which we are sitting, into which we dig and build our homes… from which our food comes… think of the topsoil and ground water, the bedrock…

Draw your attention to the sky, the clouds which are part of the planet’s membrane, protected by the atmosphere…

The same energy and matter which comprises your body, constitutes the universe… God’s naming fills the whole of creation and invites us…

I fill you with Naming.