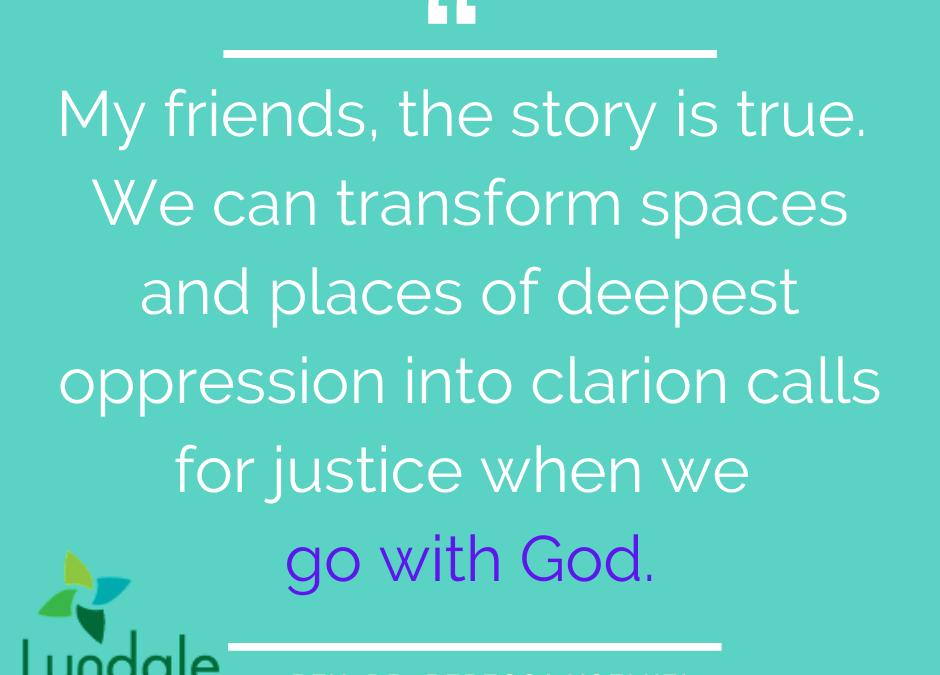 I love to tell the story, twill be my theme in glory, to tell the old, old story, of Jesus and God’s love.

I was eighteen had been been organizing with the Chicago Religious Task Force on Central America for several years. We were a motley crew of Catholics and Jews, Protestants and Unitarians. And now we were headed to El Salvador—specifically to Santa Marta, which at the time was in the middle of a warzone.

We were going to Santa Marta because it was one of the first of the so-called repopulation movement. In the early 1980’s, their hamlet of 4000 people had been attacked by US-backed national guard forces and most had been killed. The survivors had fled to Honduras, where they’d lived for the past six years. Now, they had walked back into El Salvador literally waving anything white they could get their hands on and had returned to where their village had been. They’d been back for about six weeks when we were slated to accompany them as agents of solidarity and, hopefully, protection from our own US government.

When I think of the courage and the faith of the people of Santa Marta, I think about the scripture Ashley read two weeks ago—in which God tells the prophet to buy land amidst an occupation filled with fear. It seems similarly ludicrous for people to follow God’s leading to return home to their land, literally walking amidst guns aimed at them.

There were twenty of us in our delegation. I had raised all the money from friends and church family and each time I received a check, the same sentiment was expressed, “Be careful, stay safe.”

But right before I left, I happened to meet a Salvadoran woman who was in the States as a political asylum seeker. As we got to talking, I told her about my departure in the next week. She paused and a kind of mantle settled upon her. And then she took my hands and said to me, “Go with God.”

Our scripture for this morning comes from those assigned for the day. It is a portion of Psalm 78. I know we know this, but psalms are songs. They are, in some ways, the hymnal of the Hebrew people. Psalm 78 is a song reminding the people to tell the stories.

And what is it that God has done? Other psalms remind us: God has filled the night skies with stars too numerous to count and shaped the mountains and the streams, the sacred waters and filled the earth with plants that feed and nurture all of creation.

Tell the stories that they and we might put our trust in God.

I have told you many stories about my time in El Salvador: how we awoke to the ground shaking on Christmas morning because they were bombing nearby; how we met with the mothers of the disappeared just as they’d been tear gassed at the Presidential palace for demanding to know what had happened to their loved ones. And I’ve told you about how my faith was transformed by my brief time there.

I have no idea what she had lived through to make it to this country as an asylum seeker, but I can imagine it was heart-breaking and terrifying. And her admonition to me, rooted in all that she had experienced, was, “Go with God.”

My friends, this week has been filled with a kind of anxiety that has been hard to escape. I know many of us spent much of the week doom-scrolling. And it has followed on almost nine months of isolation and fear. And it has followed on almost four years of a public-kind-of-strutting-white supremacy whose cruelty has been the point; whose method was to inflict pain and divide and conquer. I know many of us have visited places of despair and fear in these last few days as we’ve wondered if our country was going to re-elect Donald Trump.

It has been exhausting. Amidst it all, I kept trying to return to our experience of hosting the Voter Hospitality Table at SpringHouse. Everyone who worked at the table, who drank a cup of coffee or tea or had a snack, remarked at how good it was to be gathered around a table of shared food and drink, of how good it was to be working together in ways that honored each person who came to vote.

In particular, I’ve been returning to the three new Americans, immigrants from Somalia, who paused and asked me to take their picture to capture the moment when they all voted for the first time. I was struck by the Black Lives Matter sign that we had hung in the SpringHouse window that they just happened to stand beside. As I waited this week, it was to this story that I returned.

And then, yesterday, the news that we have a new president-elect and a new vice president-elect. And that it was Philadelphia and Atlanta that shifted the narrative. It was Stacey Abrams and the spirit of John Lewis. It was Nevada and Arizona and Mijente and all kinds of visionary, incredible immigrant-justice organizers that remembered to tell a story of justice and love. And, in some small way, there has been a repudiation of the cruelty and the hate and the lies and the fear. And my heart continues to swell.

Our psalmist says, “We’ll tell them of your praiseworthy deeds, YHWH, your power, and the wonders you have performed… so that the next generation would know them and as they come up… then, they would put their trust in you.”

The story is true. Go with God. Amen.