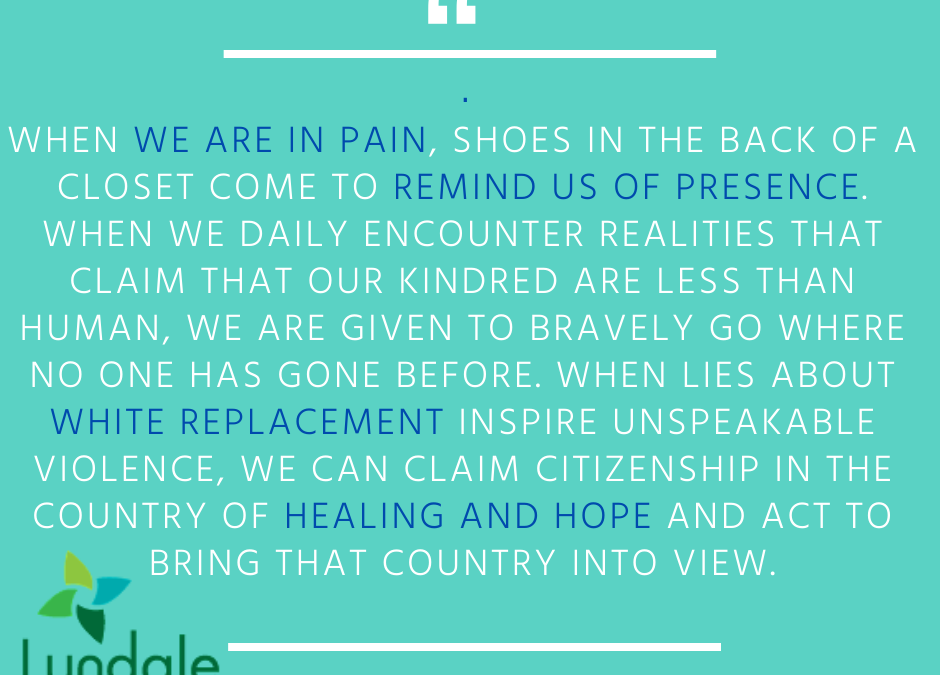 Be Now My Vision or God of my heart, nought be all else to me, save that thou art. Thou my best thought by day or by night. Waking or sleeping my treasure thou art.

Yesterday, I ran the Women Run the Cities 5K. As part of picking up my number and getting my shirt, the race had a place to donate shoes. Since I’ve been holding on to several year’s worth of running shoes, I was excited by the possibility of gathering things to donate.

But as I was doing so, I discovered a bag that’s been sitting in my closet since Dec. 6th of 2012. When I touched the handle of the bag, I knew immediately what it was…inside were a watch, a small change purse, a white hanky and a pair of Rockport shoes- things that my dad was wearing the day he died. Tied to the shoes was a tag that had my dad’s name on it as well as a check list of which of his organs were to be donated.

When my hand grazed the handle, it was as if I had been transported back in time to the room at North Memorial hospital to which I had rushed when I got the news my dad had had a heart-attack. I didn’t know until I got there that he had died. Somehow the bag with the shoes was a port-key, as Harry Potter might call it, or a time-machine that pulled me into a kind of liminality… somehow here in this time and back in that time all at once.

I’ve been musing on this experience ever since then, especially because my mom has had a tough week. She tested positive for Covid, was sent home from the Transitional Care Unit where she’d been for several weeks and she fell—all in the span of a day.

Somehow it’s felt to me like my dad found a way to reach out to me—across time and space to remind me of his presence. And, even as I was hit by grief when my hand grazed that bag, I was also deeply comforted. I was comforted by his shoes and the reminder that, even in death, he had donated his eyes to make life better for someone else.

I have to share with you that I am a Trekkie and a little bit of a Science Fiction nerd. (I want to be clear that, compared to Claire or Max or others in the Harry Potter group, I am a Sci-Fy wanna be. I do not have even a fraction of their chops.) But, I have watched and loved Star Trek since I was a young child in the early 1970’s. I particularly love Star Trek: The Next Generation. There are so many things to love: like Captain Jean Luc Picard telling the replicator: “Earl Grey, hot” and a cup of steaming tea appearing or giving an order by saying, “Make it so.” Or the android named, “Data” whose endless quest to understand what being human meant, often made him more humane, kind and loving than the actual humans.

But the thing about Star Trek that I love the most is the dream of the future it shares. They operate under Starfleet General Order 1, also known as the prime directive which forbids them to interfere with the development of any civilization they encounter. It could be also known as the No Colonization, leave not trace rule. Star Trek is also filled with relationships of love and respect and complexity across race and gender and planetary identity. Klingons and Vulcans and Earthlings working together for a safer, more just and loving universe. From 1966-1969, fans watched each week as the original Star Trek showed three Jewish men, an African American woman, a gay Asian American man, a son of a white Baptist minister and a son of Irish-Canadians work together to explore the universe: to bravely go where no one has gone before…

I loved the ways in which watching transported me to a future that I dreamed of. adrienne maree brown, a brilliant justice strategist and author, has spent a lot of time studying Octavia Butler who was an African American science fiction writer in the genre known as Afro-Futurism. Much of Adrienne’s brilliant strategy comes from getting her start in reading Octavia Butler’s work. And adrienne has said, “Science fiction is simply a way to practice the future together. i suspect that is what many of you are up to, practicing futures together, practicing justice together, living into new stories. It is our right and responsibility to create a new world.”

Now, you may be wondering what my dad’s shoes and Star Trek have to do with anything. So, let me explain:

This morning’s scripture reading comes from John’s prophetic vision while he is imprisoned on the island of Patmos. There are conflicting accounts of what kind of tribulation he is experiencing, but there is pain and suffering in the present moment for him.

And the way God shows up for him amidst the pain and suffering is to give him a dream of the future: a vision in which the healing of the nations is made real. But it’s important to know that the twenty chapters that precede our text from this morning are filled with death and pain and, frankly some really weird accounts of violence and horror. The vision, the revelation, that is given to John is filled with the present pain, a naming of all kinds of oppression and suffering. But then it turns to the vision of the promised future, to a proclamation of a time and space of dreams fulfilled, of deep connection and profound healing.

When I learned about Revelation from Leander Keck at Yale Divinity School, he taught us a lot about the text and the context in which it was written. And it was a powerful lesson. But the thing I remember the most was Dr. Keck’s description of a predecessor class—one in 1969—that was reading and learning about Revelation amidst the Vietnam War. As they struggled with what they, as seminarians could do, Lee Keck invited them to travel to the Connecticut State Capitol where they stood as a class and took turns reading all twenty-two chapters of Revelation.

To me, it was an act of liturgical direct action that has touched me. They named the kind of suffering and chaos that they were experiencing, and then, with Dr. Vincent G. Harding, they proclaimed:

For me, Revelation, dreams, being tugged into liminal space, science fiction… they all do the same thing: they offer the real and present hope that God is beckoning us to another country: of justice, forgiveness and joy. When we are in pain, shoes in the back of a closet come to remind us of presence. When we daily encounter realities that claim that our kindred are less than human, we are given to bravely go where no one has gone before. When lies about white replacement inspire unspeakable violence, we can claim citizenship in the country of healing and hope and act to bring that country into view.

Even amidst her latest struggles—and maybe, I should say, especially amidst her latest struggles—my mom spends an hour every night after she goes to bed, in prayer. She sings hymns, names everyone outloud (including many of us in this virtual room) and beckons Jesus’ mystical presence toward her and all of us. She often talks about the liminal space she enters into in the nightly ritual. I am grateful not only for the comfort and healing it gives her. But I am also grateful for the times her dreaming and visioning have literally healed and protected me.

On either side of the river is the tree of life with its twelve kinds of fruit, producing its fruit each month, and the leaves of the tree are for the healing of the nations. Nothing accursed will be found there any more…