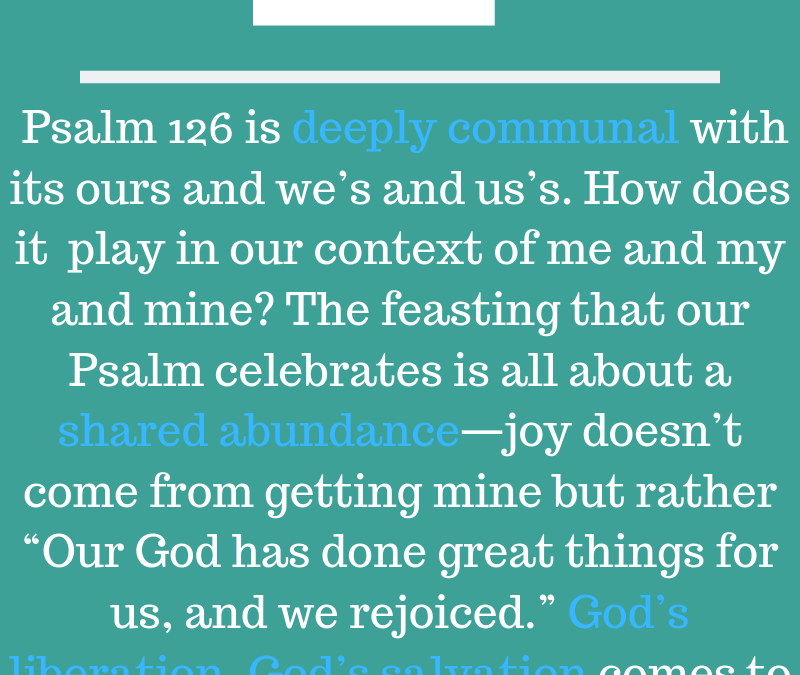 This week we continue our focus on Sabbath practice and take time to reflect on feasting and communion. As I prayed about these themes, I found myself thinking a lot about my own history. I realized that almost every memory I have of my family involves some shared meal and the foods associated with it. At my Grammie’s house it was always very Scottish food: beef stew with chunks of carrots and potatoes or Shepherd’s pie or home-made Meat Pies. It was also shortbread, lemon curd and scones, and Empire Biscuits (which were a shortbread cookie sandwich with raspberry jelly in the middle and topped with white icing…mmmmm! They were called German biscuits until World War I when they were renamed Empire Biscuits—but that’s for another sermon!).

At my grandmother Voelkel’s house there wasn’t any explicit ethnic identity associated with the food, instead, I remember the pickle and olive tray, the Ocean Spray cran-grape juice she always got in because she knew I loved it and the sandwich fixings on trays. I remember, too, my Grandmother Voelkel’s carefully folded aluminum foil that was used over and over again to keep the fixings fresh for the next meal.

At my Grammie’s, the prayer was usually a recitation of Scottish poet laureate Robbie Burns: “Some hae meat and canna eat. And some wad eat that want it. But we hae meat, and we can eat, so let the Lord be thankit.”

At my Grandmother Voelkel’s, grace was sung in harmony: “Praise God from whom all blessings flow. Praise God all Creators here below. Praise God above ye heavenly host. Praise Father, Son and Holy Ghost. Amen.”

The experiences of each of these homes and meals and gatherings were really, really different. In my Grammie’s home, there was a laughter and joy. There was very little formality as we often ate on tray tables as Scottish music played on the record player. There was a relishing of the food and a spirit of celebration. And often, there was a wee dram of Scotch as well.

At my grandmother Voelkel’s, there was always a sense of buttoned-down-ness and control—both emotionally and spiritually—that was expressed in how we ate our food. There were very few murmurs of deliciousness or expressions of gladness in the act of eating or sharing time together. And there was a sense of superiority in the absence of alcohol. It wasn’t that we didn’t enjoy time with my grandmother Voelkel but it wasn’t nearly as much fun as with my Grammie.

In some ways, the two sides of my family weren’t all that different from My Big Fat Greek Wedding. Do you remember that movie? Do you remember when the groom’s WASPish (white Anglo-Saxon Protestant) mother and father come to the celebration at the Greek Orthodox, recent immigrant home? The disorientation on the faces of the groom’s parents at all the loudness, the singing, the dancing, the food… my grandmother Voelkel was a little like that at my Grammie’s. Apparently, when my Grammie and my grandfather Voelkel first met, they were laughing and joking and my grandmother Voelkel put her hand on my grandfather’s leg and quietly said, “Now, Elmer.”

I often wonder how much of this is connected to my Grammie’s and my grandmother’s journeys. My Grammie grew up in poverty in Scotland. When she was a little girl there were many nights when there wasn’t enough to feed their family of seven and she went hungry. When she came to this country, she was decidedly working class. She started working as a domestic at twelve and worked outside the home her whole life.

My grandmother Voelkel was the daughter of a Presbyterian minister with a five point pastoral charge in Bluffton, Ohio that he served on horse and buggy. My grandmother’s mother was one of the first women graduates of the University of Kansas. While not wealthy, their family was very economically comfortable. My grandmother was the youngest of five children whose mother died when she was eight years old. I think the combination of a particular kind of enforced piety that was tied to her class and an un-salved grief created in her a sadness that never healed….

1 When our God restored the fortunes of Zion,
we were like those who dream.
2 Then our mouth was filled with laughter,
and our tongue with shouts of joy;
then it was said among the nations,
“Their God has done great things for them.”
3 Our God has done great things for us,
and we rejoiced.
4 Restore our fortunes, Holy One,
like the watercourses in the Negeb.
5 May those who sow in tears
reap with shouts of joy.
6 Those who go out weeping,
bearing the seed for sowing,
shall come home with shouts of joy,
carrying their sheaves.

As I’ve considered Sabbath practice as communion and feasting in the context of my own family and holding the scriptural text, I have been struck by a few things.

First, our text is part of the series of Psalms that were probably used by pilgrims on their way to Jerusalem—singing their prayers as they went to the Holy City. It is one of the psalms that celebrates a restoration or resurrection after a very difficult and painful time. I particularly love the image of the farmers going out weeping because they don’t expect their crops to grow. They plant with tears because they expect to be without food. But they come home with shouts of joy, their arms full of the unexpected harvest. How joyful must their feasting have been—the meal a celebration of abundance when they had girded themselves for a season of scarcity.

I imagine pilgrims singing this song, some of them journeying with heavy hearts, some, perhaps in despair, their fervent prayers for life to emerge from the places of death and hopelessness in their lives.

I wonder if that is why my Grammie was able to feast with joy and celebration. So many of her years were spent amidst a lot of pain and literal hunger. I do believe there was a sense of deep, deep gratitude that there was food and food abundant for her.

But the second piece that comes to me is how hard it is to be joyful and celebrate abundance after scarcity amidst the unfettered greed, hoarding and the super-size culture we live in. The other image in the Psalm is of the river that runs through the desert. The relief at water amidst drought brings such joy. But a river that runs through a flooded land evokes a much different feeling. I wonder what feasting means in a culture where gorging ourselves seems the norm. What does abundance look like when affluenza’s McMansions and multiple storage units for all the stuff that won’t fit in our homes and more and more and more all seem the word of the day?

I also wonder how the deeply communal nature of the Psalm with its ours and we’s and us’s plays in our context of me and my and mine? It seems to me that the feasting that our Psalm celebrates is all about a shared abundance—joy doesn’t come from getting mine but rather “Our God has done great things for us, and we rejoiced.” God’s liberation, God’s salvation comes to us as a community.

This communal nature of the shared abundance reminds me of Paul’s letter to the church in Corinth. In the eleventh chapter of his first letter to them, Paul warns about what happens when the wealthy members of the community take communion together but don’t do anything about feeding the poor members of their community first. Feasting is about shared abundance. Communion is about sharing and equity. Salvation and liberation are intertwined and they are communal.

As we reflect on Sabbath practice and feasting and communion in these times, there is one more piece that I have been clinging to. Many of us are seeking to be farmers of kindness and love, of justice and equity and liberation. And I know that we are sewing the seeds of this kindness and love, justice, equity and liberation with tears these days. That we weep when it seems as if our sewing will never reap. But our Psalm and the meal we are about to share is meant to remind us that “those who go out weeping… shall come home with shouts of joy!”