Do This in Remembrance of Me 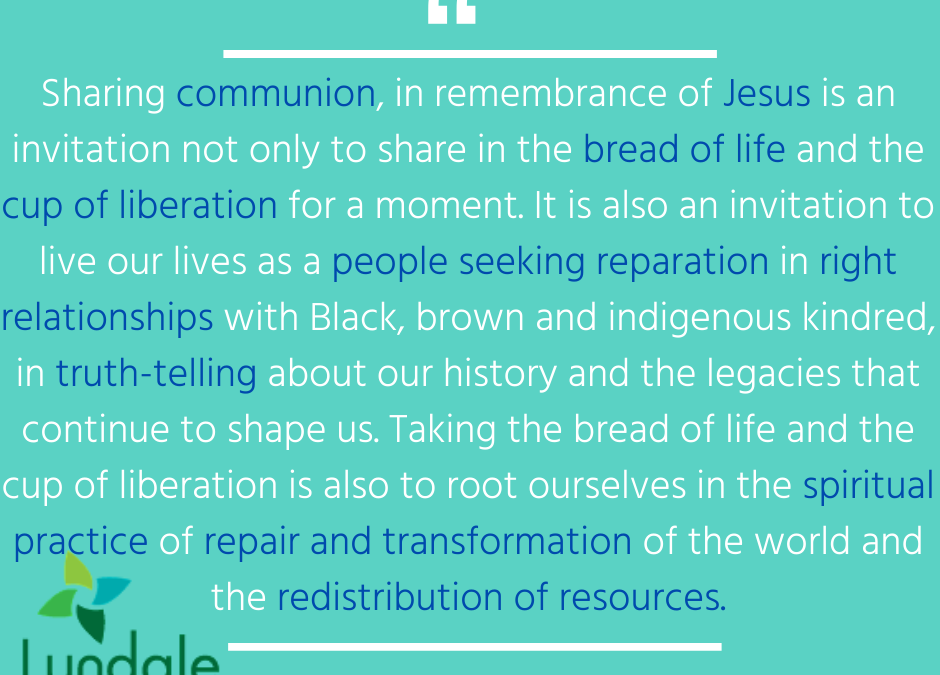 We sat with her amidst the cavernous exhibition hall with its four-story ceiling filled with artificial lights and the sounds of thousands milling around. But none of the three of us paid any attention. All we heard were the stories and the tears. It hadn’t been a year yet since her beloved Byron had died. She called him mahasani and she explained that it meant one who shares your skin, one whose body and soul were merged with yours. But her grief was also for the eleven other close relatives she had lost in the last three or four years. The grief, the sorrow were palpable.

My partner, Maggie and I met up with Toni Buffalo at the UCC General Synod in Milwaukee in June of 2019 because I was helping lead a trip of SpringHouse folx to her home on the Cheyenne River Reservation in a just a few weeks. Toni and I had met when she and Byron were part of the Oceti Sakowin camp at Standing Rock and I was at Standing Rock because Marlene Whiterabbit Helgemo had asked that I accompany her to be a white witness and ally.

On this Indigenous People’s Sunday, I want to start by saying the name of Byron Buffalo who has been with the ancestors for two years. And I want to say the name of Toni Buffalo and Marlene Whiterabbit Helgemo. All three and many others have been my teachers and elders on my ongoing journey toward reckoning with the legacy of being a white settler Christian in this land. I say their names because I want to begin with the sacredness of relationship. Healing and repair are rooted in the sacredness of relationship.

I also want to begin with the necessity of truth-telling. When Toni invited our group from SpringHouse to travel to her home on the Cheyenne River Reservation she had two asks of us: that we collectively learn about the Doctrine of Discovery (and teach about it upon our return) and that we learn a bit about Lakota cultural practices—like deep, deep respect for elders, a patience with a much different pace of life and a willingness to follow and do what the elders asked of us as opposed to what we thought should get done. So, out of a respect for Toni, Byron and Marlene, among many other elders, let me say a few words about the Doctrine of Discovery. (I know for some this is repetition. But Toni told us that, particularly for white, settler Christians, telling the story of the Doctrine of Discovery over and over was really important so we could remember that it isn’t something that is past. We had to grasp that it is alive and poisoning us today.)

A little over 500 years ago, several Popes wrote letters to the kings and queens of Portugal, Spain and England urging them to go first to West Africa and then to the Americas. In both locations, these letters, which were really commands, told the white Europeans to try to convert any pagan or Muslim folx they encountered. If they couldn’t convert them to Christianity, they were ordered to kill them and take their possessions and land. These letters are known as the Doctrine of Discovery or the Doctrine of Christian Dominance.

It is almost impossible to exaggerate the genocide, brutality and suffering the Doctrine of Christian Dominance has caused. And one of its core practices has been breaking up families and separating children from parents. African American parents were regularly sold away from children during slavery by Bible-carrying, church-attending white Christians. Native children were, for generations, stolen from families and put into boarding schools run by churches in order to “civilize” them. In both cases, sexual and physical violence were rampant. And, to this day, Native peoples are governed by policies which subjugate, oppress and disenfranchise them in big and small ways. One concrete example: many Native folx in North Dakota were not eligible to vote in the last election because many streets on reservations don’t have names and folx don’t have addresses.

Toni said to us many times while we were together—I want you to know about the Doctrine of Discovery because it continues to shape and poison our lives every day. One of the palpable ways it lives on is the health impacts of poverty, land on which very little will grow, joblessness and despair. We were on the Cheyenne River Reservation to visit their horse program that was designed to slow the rate of teen suicide. And in the four days we were there, Toni went to three funerals. Grief was like a blanket that muffled and covered so much. One of the legacies of the Doctrine of Discovery that continues to poison is literal death and the grief it causes.

But Toni also shared with us the stories of deep spiritual practice and deep faith that lead to resilience and healing. Her ask of us was that we find ways to share our stories so that Christian kindred could act in solidarity, faith and in ways of reparation.

So this morning, following Toni’s direction, I have named the importance of genuine relationship and truth-telling and call out the ways that these are acts of repair and reparation.

And they lead me to the third thing I want to say on this Indigenous People’s Sunday. As we ground ourselves in genuine relationship with indigenous, Black and people of color elders and leaders, as we tell the truth—about our own history—of our families who benefitted from the Homestead Act and the GI Bill and the redlining in real estate; and we tell the truth about how through it all our beloved churches and in some cases, our beloved church leaders baptized the harm, the violence, the devastation in Christian theologies of “helping” and “bringing light;” as we tell this truth that can threaten to make us go numb with the horror, we are called to engage in deep spiritual practice.

Our scripture this morning is the telling of Jesus’ last celebration of Passover with the disciples as told in the gospel of Luke. We hear Jesus say to his disciples, “Do this in remembrance of me.”

When I think about Jesus as a Jewish rabbi, celebrating Passover with his closest friends and co-conspirators—literally those with whom he breathed on a daily basis—I need to ask, what does he mean, do this in remembrance of me? What does it mean to do something in remembrance of someone?

And it feels important to remember what the Passover meal was all about. In modern Jewish households, Passover has a Haggadah, a liturgical guide. Over the last ten or fifteen years, I have celebrated the second night of Passover (which is when non-Jews are invited to seder tables) with my dear friend, Beth Zemsky. The Haggadah she has compiled over the years shares these words about Passover:

“The Haggadah is the retelling of the Exodus from Egypt, the pivotal event in Jewish history. The [Passover] seder has always been a place where Jews strategize how to bring about change in the human condition. Ever since Rabbi Akiba used the Passover seder to plan a revolutionary struggle against the Romans, Jews have used the seder to continue work on Tikkun Olam, repair of the world. The seder is a reminder of a moment when the world was transformed. This Haggadah calls us to take our responsibility to be part of the ongoing evolution of Jewish culture and ritual seriously, by re-imaging and re-creating rituals that speak to our highest ethical values, political lives and commitments…”

It seems important that Jesus asked his disciples, his co-conspirators, to do this remembrance of me amidst this kind of Passover celebration. It seems to me that the same command to repair the world… to transform the world is what Jesus is asking his disciples to do as a way to honor and re-member. That part of Jesus lives when we re-member him by repairing the world.

But on this Indigenous People’s Sunday, as we have named the sacredness of relationship, the necessity of truth-telling, the grounding in spiritual practice starting with the communion table, we must also say that reparation, that repair is only a pipe dream or an empty promise if there isn’t real redistribution of resources: of money, land, power, and systems change.

When we come to the communion table, it is most rightly a reminder of the Passover table. And sharing communion, in remembrance of Jesus is an invitation not only to share in the bread of life and the cup of liberation for a moment. It is also an invitation to live our lives as a people seeking reparation in right relationships with Black, brown and indigenous kindred, in truth-telling about our history and the legacies that continue to shape us. Taking the bread of life and the cup of liberation is also to root ourselves in the spiritual practice of repair and transformation of the world and the redistribution of resources.

This year, I was a guest at Beth’s virtual second night of Passover.. And I attended right before I came to Lyndale’s Maundy Thursday service. When I think about what “do this in remembrance of me” might mean in these times, I am challenged by the witness of our Jewish kindred. I am challenged (not to appropriate or co-opt because we, Christians have too often stolen from Judaism) but to be held accountable to its vision. This is what the introduction to the seder read: