Deepest Connection: The Stars and Planets and All the Company of Creation 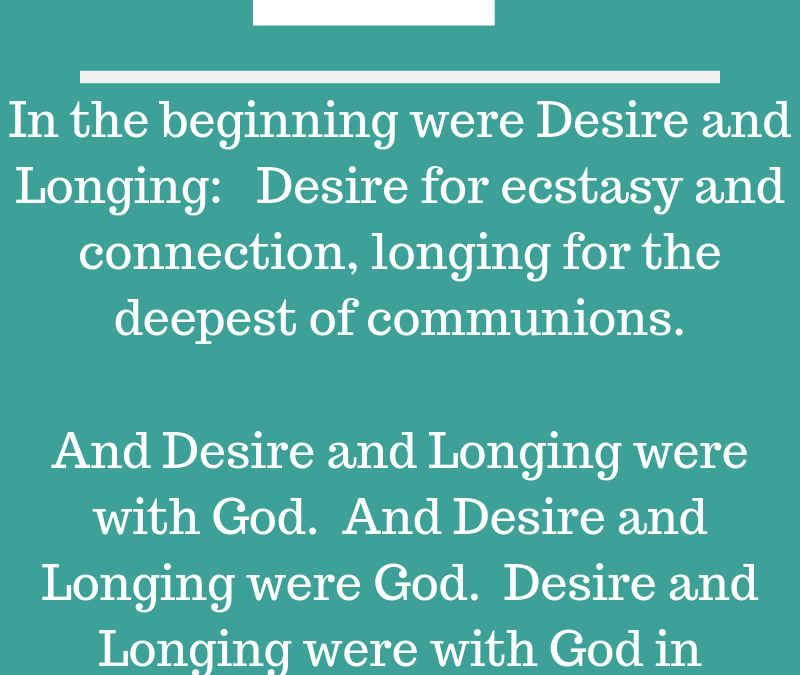 The Lone Wild Bird in lofty flight is still with Thee, nor leaves Thy Sight. And I am Thine, I rest in Thee, Great Spirit come and rest in me.

In the beginning were Desire and Longing:
Desire for ecstasy and connection, longing for the deepest of communions.

In fact, they were the animators, the prodders, the relentless whispers
which propelled the explosion of creativity:
stars and planets and the whole company of creation.
These all came into being out of that Desire and Longing
and not one thing would have been without
the promise of ecstasy, connection and communion.

It was one of those times in my life when I was pondering and struggling with a lot of things. What should I do? Who was I? What was God calling me to be? Although not necessarily visible on the outside, the questions swirled within me, a constant companion.

In the midst of this, I visited my best friend in Colorado and we drove with her family into the Rockies for a couple of nights of camping. As everyone was sitting around the fire, just as the sun was beginning to set, I decided to go for a short hike by myself.

Although my questions were front and center, distracting and diverting my attention, I tried to take in the beauty of the peaks in the distance and the little valley into which I was descending with its babbling brook, pine trees, and flowers growing around the stones that were scattered everywhere.

As I got to the bottom of the valley, I saw a huge log. It was a tree that had fallen long ago and it seemed to beckon me to lie down on it, to think and pray. On my back with the solid wood underneath me, I looked up and spotted a hawk just gliding above me.

For a while, I got lost in my inner struggle.

But soon, my attention was brought back as the hawk circled and then tucked its wings and simply dropped out of the air. As I lay there, it got closer and closer to the ground until, finally, it extended its wings and with a [make the sound], it buzzed near me and was taken up, effortlessly. For the next period of time (I really don’t know how long), I lay there witnessing what, to me, in that moment, seemed to be God’s direct presence—the cycle of trusting, falling, allowing, being returned to safety; the interplay of letting go and risk-taking. And it was as if God was speaking directly to my heart. You don’t need to worry, you don’t need to be in control. Trust me and I will guide and protect you.

His heart was breaking—in that particular way that happens when you witness contamination and pollution. The water that had flowed so freely, whose movement and smell, whose molecular make-up had nourished thousands of plants and animals and humans for millenia—that water was now dammed by the Fujiwara Dam and it had become twisted and distorted—toxic instead of nourishing.

And so Reverend Kato Hoki, chief priest of Jyuhouin Temple, went to the water in the dam like he would a sick member of his community. For an hour he prayed and sent his intentions for healing.

I don’t have any idea if Rev. Hoki knew the power of his prayers or if he simply prayed because he had to. But a scientist studied the effect of Rev. Hoki’s prayers. That scientist, Dr. Emoto, reported that Rev. Hoki’s claiming his deep relationship with the kindred water literally altered and restored the molecular structure of the water. Rev. Hoki’s prayers brought forth the beautifully formed geometric crystals found in clean, healthy water.

Dr. Emoto also discovered that our singing and playing music can heal the water, too.

A few summers ago, Ron Rooney, Fred Smith, Ashley Harness, Kayla Collins, Claire Klein and myself joined a few hundred colleagues from kindred UCC churches across Minnesota for Annual Meeting. The keynote speaker that year was Rev. Traci Blackmon. If you’re a church nerd, you probably know her name. You might also recognize her name if you’ve followed the Moral Revival that Rev. Dr. William Barber and the Poor People’s Campaign has been engaged in. Rev. Blackmon is an African American woman who pastors in the town right next to Ferguson, MO. For nearly twenty-five years she was a nurse and worked on a variety of public health crises. But in middle-age, she went to seminary and became a pastor.

When she addressed us at the Annual Meeting, she told us the reason for her change in careers was that, at their heart, all questions and conundrums of justice are first and foremost, questions of theology. How we describe the world, what metaphors we use, how we understand God’s dream for the world—these can shape justice or make injustice inevitable.

As a pastor and theologian, I very much resonated with her decision to focus her life’s work in theology. And, particularly today, I find it deep wisdom.

We are facing into a human-created Climate Crisis. Our glaciers are melting—much more rapidly than we thought. The Amazon, known as the planet’s lungs because twenty percent of our oxygen comes from these sacred trees, is on fire. And “Drill, Baby, Drill” animates large crowds in our political campaigns.

Today, we watched the first part of Paris to Pittsburgh, a film about the work of climate justice activists. And, after church, we are all invited to join a conversation with Julia Nerbonne from Minnesota Interfaith Power and Light who is here to help us become a Climate Justice congregation. All of this is critically important and I urge you to find the ways that speak to you and become involved.

One of the most important parts that we, as a Christian community, can do is grapple theologically. We can seek to root ourselves in God’s true dreams for us and our planet. And we can interrupt and de-construct the bad theology we’ve been taught.

One of the most painful and destructive theologies we’ve been taught comes to us from the Doctrine of Discovery. Our Christian ancestors—popes, kings and queens and all of those who did their bidding—used Christian theology to say that white, European Christians were divinely ordained to conquer, rule and own the land and any peoples who were not white, Christian and European. When we talk about Empire Christianity, this is what we mean—using theology to justify and sanctify a world order that is based on using, extracting, and owning of some by others. And one of its organizing principles is disconnection.

But this is bad theology. Fracture, disconnection, use and abuse are not God’s dreams for the world.

What if God’s dream for the world… what if the deepest longing of God… what if the central logic of creation is that of deep, deep connection? What if we are made for communion? What if the hawk’s flight and the water’s crystals are inextricably bound with each of ours? What if we are all related to each other? What if what happens to the monarch on its long sojourn affects the food we should be eating? What if

In the beginning were Desire and Longing:
Desire for ecstasy and connection, longing for the deepest of communions.

In fact, they were the animators, the prodders, the relentless whispers
which propelled the explosion of creativity:
stars and planets and the whole company of creation.
These all came into being out of that Desire and Longing
and not one thing would have been without
the promise of ecstasy, connection and communion.

Connection, communion, deep, deep relationship are God’s desires for us. These are the words that were with God and are God and through which all things have come into being.

May we re-member this and live as followers of this Word-Become-Flesh.