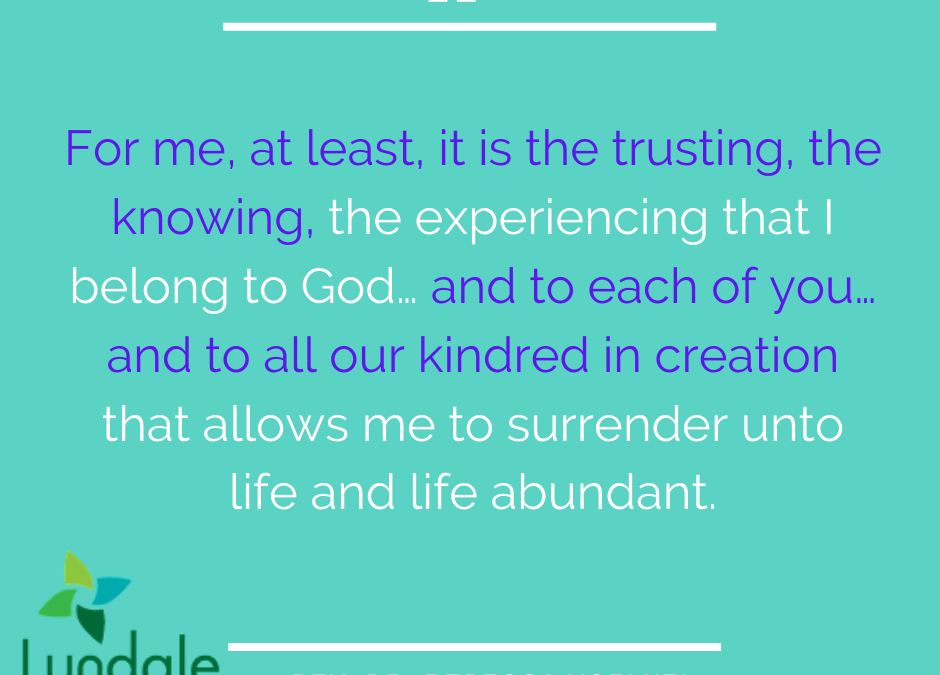 He was about nine years old and he was clipped into a rock-climbing harness with a professional belay person on the ground. His ascent up the wall was flawless, like he was born to climb. Effortlessly, he grabbed a hold of the next hand grip and his feet seemed to know just where to grab the next toe grip. He even made it around a protruding section of the wall which required him to hang almost upside down. His grip was firm and steady. But when he got to the top and rang the bell, he faltered. As he clung to the wall, his belay person gently called up, “OK, now, just let go and I will lower you down.” No response. After a few seconds. “It’s OK, just let go of the hand holds and I will slowly let you down.” After a pause, the boy replied, “But it’s hard to let go when you’re afraid.”

Our Lenten theme this year is “Surrender, Repair, Belonging.” We are exploring how the spiritual discipline of surrender is an integral part of the work of reparation. But I have to tell you that the practice of surrender is not an easy one for me. Often, it is difficult. I think I’m a lot like the nine year old: practiced at holding on, gripping tight in order to take risks. Trusting in my own strength and tenacity to get to the end of a task and ring the bell.

And when I turn to scripture, I encounter a lot of texts which call for perseverance and persistence, resistance and keeping on, keeping on. These are the texts that I am more often drawn towards. Some of that is for very good reasons. As a lesbian and a woman, I’ve often met with spaces and places that seek to deny my humanity or relegate me to a place of silence and submission. And in those cases, persevering was what was called for. “Nevertheless, she persisted” resonated so well because so many have had to hone those practices as life-saving and liberatory.

But the Bible doesn’t only lift up stories of perseverance and resistance. There are also many stories about the sacred practice of letting go, of surrendering so that life and life abundant might flourish. And there have been many spaces and places where we, individually and as a community, are called to surrender in order to survive and thrive.

But it is hard to let go when you’re sacred. I so resonate.

As I have been praying about this morning’s service, I recognized there is another reason that I struggle with letting go or surrendering. There is a part of perseverance, that I can get stuck in, that is rooted in the white supremacy cultural fallacy that it is all up to me. That, somehow I am alone. And if I don’t hold tight, keep fighting, it won’t get done. In this scenario, letting go or releasing is like letting something drop into the abyss. Surrendering is giving up. It can almost feel like annihilation.

I was particularly praying on this as I walked along the shores of my beloved Lake Nokomis this week and I realized how real this fear is in me. And almost simultaneously, by the breeze on my cheek and the sound of a wing flap of a bird overhead, I was brought back to the reality that loneliness and disconnection are not how God operates in the world.

The invitation to surrender, to let go is deeply rooted in the powerful, life-saving, soul-catching, reality that we can trust in God. We can trust in the God who, at every moment is reaching out to us, is all around us.

As I stood by Lake Nokomis, I found myself turning my face toward the sun and lifting up all that I had been carrying… and I found myself giving it over to God. I didn’t have to hold it all, I could give it over, lift it up to the always and everywhere spirit of God who continued to kiss my cheek with breeze and grab my attention with ducks and birds and trees.

Surrendering as giving over or lifting up…

And then there’s our Scripture reading from today which also interrupts my distorted, isolated, lonely, out of whack thinking.

Now the whole group of those who believed were of one heart and soul, and no one claimed private ownership of any possessions, but everything they owned was held in common. With great power the apostles gave their testimony to the resurrection of the Lord Jesus, and great grace was upon them all. There was not a needy person among them, for as many as owned lands or houses sold them and brought the proceeds of what was sold. They laid it at the apostles’ feet, and it was distributed to each as any had need…

This is a story from the Book of Acts that Rev. Mueller read for us. There are many ways that this witness from our forebears in the faith gets to me. But as we contemplate the weaving of surrender, repair and belonging, I am struck by how a great grace was upon our ancestors. A great grace was upon them that allowed them to know that they belonged. They belonged– to God’s continual resurrection of life over death. They belonged to this God and they belonged to one another. And this belonging- to God and to one another- allowed them to surrender what was theirs individually so that it could be held in common so that there was not a needy person among them.

Maybe our theme should be belonging, surrendering, repairing. For me, at least, it is the trusting, the knowing, the experiencing that I belong to God… and to each of you… and to all our kindred in creation that allows me to surrender unto life and life abundant.

Rev. Jeff Sartain shared a story this week that touched my heart about the power of surrender. He says, “When my mom died seven years ago we wondered what to do the the family piano. It was a gift from my dad to my mom and all five of us kids played this old spinet.  It was the center of our home and it traveled along with my mom from the family home in Littlefork, to her apartments in Fargo, and eventually to her senior living apartment in Minneapolis. Wanting it to have a good home we were thrilled when my friend Chris Wogaman took it into his care when Mom died. He loved this old piano until now, tuning it himself and treasuring its spirit. He will soon replace it with a beautiful grand piano, and since none of us in the family have a home for mom’s piano, we are bidding it a final farewell. It is in its 80th year. On Thursday, thanks to Zoom, we gathered, the remaining four siblings, from Washington, Georgia, and Minnesota, while Chris gave a farewell concert from Illinois. What a gift! There is no more dear and thoughtful person on this planet than Chris. One last hymn on this piano that brought so much life to our family. Abide with me. ♥️♥️♥️♥️♥️♥️ “ And then Jeff shared the recording of his siblings singing as Chris played and sang Abide with Me.

Belonging to God and to one another, may we, too surrender unto life and life abundant. Amen.