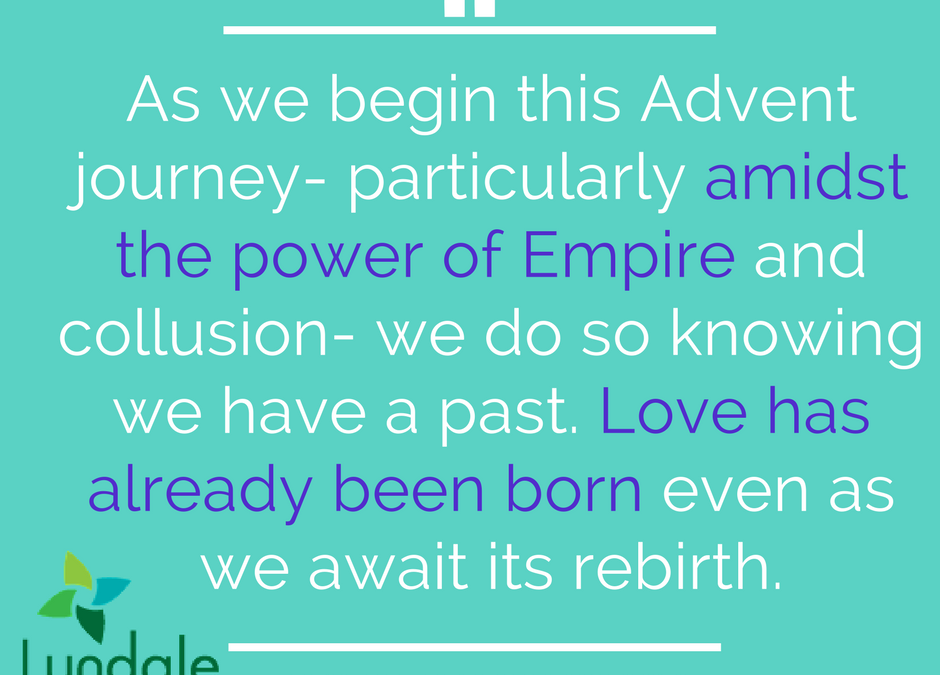 O Come, O Come, Emmanuel and ransom captive Israel that mourns in lonely exile here…. Until the Child of God appear. Rejoice, rejoice, Emmanuel, shall come to you, O Israel.

What gives you hope? How does hope persist for you? How are you able to tolerate waiting in this Advent season?

Sometimes when there is a prescribed season of the church (like Advent or Lent), I have to get myself into the right mindset or framework because it just doesn’t match what I’m feeling or experiencing. Or sometimes I read an assigned scripture for the day and think, what does that have to do with my life or ours?

The yearning, the longing, the waiting for love to be born amidst a world that seems to have gone mad…. The persistent search for hope amidst the madness and waiting… it all seems to have been written for this moment.

Our scripture for this morning focuses on John the Baptist. You might remember that John dressed himself in the clothing of the prophets (camel hair tied with a leather belt) and ate locusts and wild honey in order to give people all the visual and cultural cues of the prophetic tradition. Something is radically wrong, John is proclaiming.

His people are occupied by the Roman Empire—with its military and its tax plan, with its sexual violence and conquest. And far too many religious leaders are corrupted by their colluding ways. Things feel apocalyptic, with things they hold dear being destroyed.

Repent, John pleads. Turn away from the Empire, he demands. Find a way to cleanse yourself of all this toxicity and, instead, help prepare the way for the One of justice and peace.

It has been a week of Empire and collusion in our lives, too…

Matt Lauer, Garrison Keillor and the continued senate campaign of Roy Moore with his Christian preacher supporters who invoke Mary and Joseph to literally baptize pedophilia with Christian theology.

The Republican Tax bill which passed the Senate in the middle of the night that, if it survives reconciliation with the House bill, will push 11,000 people off health care, put money in the weathiest pockets, open the Arctic National Wildlife Refuge to oil drilling, just to name a few.

And then there was World AIDS Day on Thursday.

With each of these, and with many things these days, I find myself being transported to other places—flashbacks of a kind.

There are the Anita Hill hearings which I watched with such hope, wearing my “I believe her” button… there was that time in our shelter at Peoples Church in Chicago, whose numbers had swelled because President Reagan cut funding to affordable housing and homeless services. I sat at a table, as a teenager, with a homeless man whose fingers were black from severe frostbite because he had nowhere to go amidst the bitter cold. What can I do, he asked my fifteen year old self?

And there is Michael, one of my first patients when I worked as a chaplain at the VA in Seattle. He was in his late thirties and dying of AIDS. It came to me as a flashback this week how he recounted his early years in church when he was told of his sinfulness and worthlessness.  He shared his excommunication when it was learned he was gay.  And how his AIDS diagnosis only made it worse.  He spoke of simple cruelties and profound ones.  In place of care and love, ridicule and revulsion.  When he desperately needed tenderness, betrayal came, again and again.

And then how he finally came to the questions, asked with genuine fear and trembling. Do you think I’m going to burn in hell?  Do you think by this time next week I’ll be in the outer darkness?

These are the words from Anne Lamott

“One of our newer members, a man named Ken Nelson, is dying of AIDS, disintegrating before our very eyes…Ken has a totally lopsided face, ravaged and emaci­ated, but when he smiles, he is radiant. He looks like God’s crazy nephew Phil…There’s a woman in the choir named Ranola who is large and beautiful and jovial and black and as devout as can be, who has been a little standoffish toward Ken…She was raised in the South by Baptists who taught her that his way of life—that he—was an abomination. It is hard for her to break through this. I think she and a few other women at church are, on the most visceral level, a little afraid of catching the disease…So on this one particular Sunday… when it came time for the second hymn, the Fellowship Hymn, we were to sing “His Eye Is on the Sparrow.” The pianist was play­ing and the whole congregation had risen—only Ken remained seated, holding the hymnal in his lap—and we began to sing, “Why should I feel discouraged? Why do the shadows fall?” And Ranola watched Ken rather skeptically for a moment, and then her face began to melt and contort like his, and she went to his side and bent down to lift him up—lifted up this white rag doll, this scarecrow. She held him next to her, draped over and against her like a child while they sang. And it pierced me.”

“It is times like these that show what it really means to have a past and an inner legacy independent of the change of times and conditions. The awareness of being borne up by a spiritual tradition that lasts for [centuries] gives one a strong sense of security in the face of all transitory distress…”

As we begin this Advent journey– particularly amidst the power of Empire and the betrayals of collusion–we do so with another kind of flash back: We have a past, an inner and an outer legacy. While we wait the birth of love, we do so knowing that love has already been born.

While we seek hope, we do so coming back, over and over again, to the communion table… a place where the cradle and the solidarity of the cross are embodied. The communion table… a place where we know the reality of God’s radical, physical, palpable presence with us and in us and the reality that God will and does go into any pain and suffering we might encounter in order to transform it into new life.

And we are fortified and reminded and compelled to prepare the way.