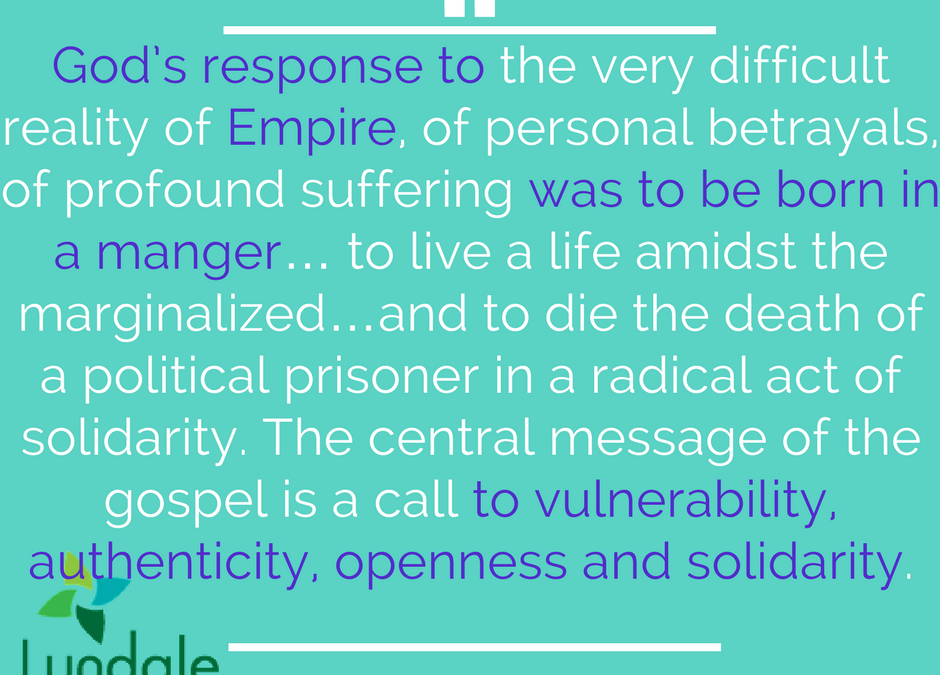 I got a text from a survivor after Sen. Al Franken resigned which read in part: “I’m devastated by the sexual harassment/assault allegations and I’m devastated by his resignation. I am both happy that he has resigned and devastated by the whole thing. I need a grieving, weeping, wailing, thrashing, screaming, raging, pull your hair out and beat upon your bare chest type of public gathering.”

At a campaign event earlier this year, when asked by an audience member when the last time America was “great.” Alabama Senate Candidate Roy Moore responded: “I think it was great at the time when families were united—even though we had slavery—they cared for one another…Our families were strong, our country had a direction.”

And people cheered… and it looks like he’ll win the Senate seat.

In the face of this and other daily news, my partner, Maggie, who has been in treatment for PTSD since the election last year, talked about feeling like she needed to crouch in a corner and keen… Through tears, she asked me, “How is it that others are just going about their daily lives? How are you going about your daily life?”

There is a lot of evidence to suggest that life under Roman occupation was similarly traumatic. People forced into fighting and dying for the Roman army, taxes collected through violence that left many practically starving, daily abuse and sexual violence by Roman soldiers with no recourse, to name but a few.

It was a very difficult time.

“My soul magnifies my God,
47     and my spirit rejoices in God my Savior…
49 for the Mighty One has done great things for me,
and holy is her name.
50 Her mercy is for those who fear her
from generation to generation.
51 He has shown strength with his arm;
he has scattered the proud in the thoughts of their hearts.
52 She has brought down the powerful from their thrones,
and lifted up the lowly;
53 he has filled the hungry with good things,
and sent the rich away empty.
54 She has helped her servant Israel…
55 according to the promise she made to our ancestors,
to Abraham and Sarah and Hagar and to their descendants forever.”

I don’t know about you but this Magnificat always catches me by surprise, I think because so many try to tamp down and muffle Mary. She’s been so clad in baby blue cloth over the years that she’s been pacified beyond recognition. She’s been dis-empowered and made out to be meek and mild.

But this portrayal is Empire’s attempt to pacify her and it’s wrong. Mary sings like the prophet she is and echoes Hannah’s song in the Hebrew scriptures. Theirs is a radical announcement of a re-ordering, of a massive disruption, of a communal turning.

And her song is a prophetic critique of power in the ways that all the Hebrew prophets employ. It names power with precision and specificity. She names that the way the tyrants, the occupiers, the dictators use power—both interpersonally and systemically– stands condemned. Mary is clear the way all the prophets are clear: any context or process by which one group of people employ power and resources to subjugate, oppress, marginalize, and/or kill; any economic, religious, political, cultural, or relational system of power that is infused with an ethic of power-over, violence, extraction for profit, scarcity, use and a subject-object perspective… any of this will be disrupted, transformed, turned on its head.

The Magnificat is about power. It is about the mis-use and a-buse of power. And it is about God’s transformation and redistribution of power.

I have to admit that, given our context, I read Mary’s song and I have vengeance in my heart and on my lips. I am so worked up, angered by watching those I love be targeted and intentionally triggered, I want to perpetrate violence. I want to see the [insert expletive] get their comeuppance. And I believe and trust that God can handle my totally understandable rage.

But I also believe that Advent, and the reality that Mary’s song portrays, isn’t about my bloodthirst, even as it does speak to our difficult time.

I have been challenged and drawn to reflect on what it means to be experiencing this difficult time amidst the preparation and waiting of Advent. And I keep getting stopped in my tracks by the central message of the gospel: God’s response to the very difficult reality of Empire, of personal betrayals, of profound suffering was to be born in a manger…

to live a life amidst the marginalized…

The central message of the gospel is a call to vulnerability, authenticity, openness and solidarity.

The God of the manger takes power very, very seriously but claims the vulnerability of a newborn as more powerful than the oppression of Empire. The God whose birth is foretold by homeless, outdoor laborer shepherds, understands that the authenticity of truth spoken to power-over is the real power. The God whose Incarnation happened not in the King’s palace, or the Trump Tower of Jerusalem, but in a barn in a backwater, bread-making town embodies the reality that true power is collective and liberative and life-giving.

We’ve been reading Dietrich Bonhoeffer in Adult Ed and I’ve been praying on his work. As I said last week in class, it feels like a Bonhoeffer Advent. His struggling with what he was to do in the face of the rise of Nazism, his grappling with the season of Advent both leading up to World War II and during the height of the Holocaust, speaks to me. Two of his brief reflections seem appropriate right now:

For the mighty ones,
for the great ones of this world,
there are only two places
where their courage deserts them,
which they fear in the depths of their souls,
which they dodge and avoid:
the manger and the cross of Jesus Christ.

(from the Mystery of Holy Night)

Who among us will celebrate Christmas right?
Those who finally lay down all their power, honor and prestige,
all their vanity, pride and self-will
at the manger,
those who stand by the lowly and let God alone be exalted,
those who see in the child in the manger the glory of God
precisely in this lowliness.
Those who say, along with Mary,
“The Lord has regarded my low estate.
My soul magnifies the Lord,
and my spirit rejoices in God my Savior.”

(from The Mystery of Holy Night)

Now, I have to tell you that all of this theology has challenged me and my bloodthirsty- it’s-about-time-for-a win and a comeuppance. But it has not yet spoken to my heart, nor to Maggie’s despair.

It is a very difficult time.

And so I turned to my community to ask through Facebook, how do you cling to the God of the manger and the cross? How do you hold fast to the power of vulnerability in the face of Empire?

And they responded, a lot of them responded. It was as if we all needed to remind ourselves that in this difficult time, despondency or bloodthirst may be perfectly normal. But that isn’t the Advent story:

One colleague who is white, two feet tall and uses a mechanical wheelchair responded:

“Being vulnerable my whole life I was terrified of opening up in situations emotionally because I didn’t want to present myself for more rejection. But the claiming of my own vulnerability instead of running from it was transformative. It has led me to being confident in the ministry that I am going to pursue. Disability Justice Ministry.”

One white, Catholic woman simply responded with the picture of a line of Chinese army tanks and a single man, standing with his hands at his side in front of the first one… another African American man responded with a picture of an African American man dressed only in pants, his chest bare and his hand held high as he stood in front of a line of white police officers dressed in riot gear. Under the picture he wrote, “this is the man who just won election to the City Council of Charlotte, North Carolina.”

“You know that the Center For Popular Democracy has been bringing down citizens to testify in the halls of the congressional buildings, right? To risk arrest testifying on their own behalves, people in wheelchairs, those with terminally ill children, with pre-existing conditions — who will lose healthcare options altogether if the tax bill goes through and Medicaid is destroyed.

This past Tuesday, I took my third, principled arrest in DC, along with about 100 others. With us was a breast cancer survivor named Fran who stripped to the waist to show her mastectomy scars, with the words SHAME SHAME SHAME written on her back in sharpie. I have never been quite so moved, in all my years of doing direct action for healthcare and justice in the US, as I was to risk arrest with Fran.”

One white lesbian woman reminded me of the people dressed in angel costumes, with huge wings who shielded the group of Fred Phelps protestors and their hatred, so that people attending Matthew Shepard’s funeral wouldn’t see or hear their vile.

“My story comes from a Soulforce Alabama action, not a direct action of protest, but simply being visibly present in a moment of potential injustice. Two of us went to a rural courtroom where a gay man was facing a civil court trial for a business transaction that his personal health had prevented him from completing (a back injury so he could not finish in a timely manner the installation of a pool liner.) He and his customer had sorted it out and the customer had dropped the complaint, but local law enforcement and DA wanted to “make an example” of the guy (for being gay.)

When we showed up, the judge and DA wanted to know who we were and why we were there. Immediately the judge called the attorneys into his chambers and a few minutes later emerged to say the case was dismissed. But that is not the part of the story that has led me to tell it. It was the guy’s attorney, also privy to this process, who came up to us afterward and asked to talk with us at his office nearby. We agreed. A few minutes later we were absolutely astounded by the reason.

This white haired attorney was a prominent member of a very conservative church (fundamental, evangelical). He felt that we were safe people to talk with about his own spiritual dilemma – How can you know you are saved? It was not a question he could safely ask or discuss in his own church. We then had an honest conversation about faith versus knowledge/certainty.”

She goes on, “God is at work in ways we do not always see. God is also at work in our adversaries. The message for Advent is that it is already happening. We just have to be present and involved, taking the risks of faith and love, to witness to it.”

In this very difficult time, may we take the risk to witness to and act with the One whose advent comes to us in a vulnerable child.