Advent 4: Preparing to Sing the World Right-Side Up 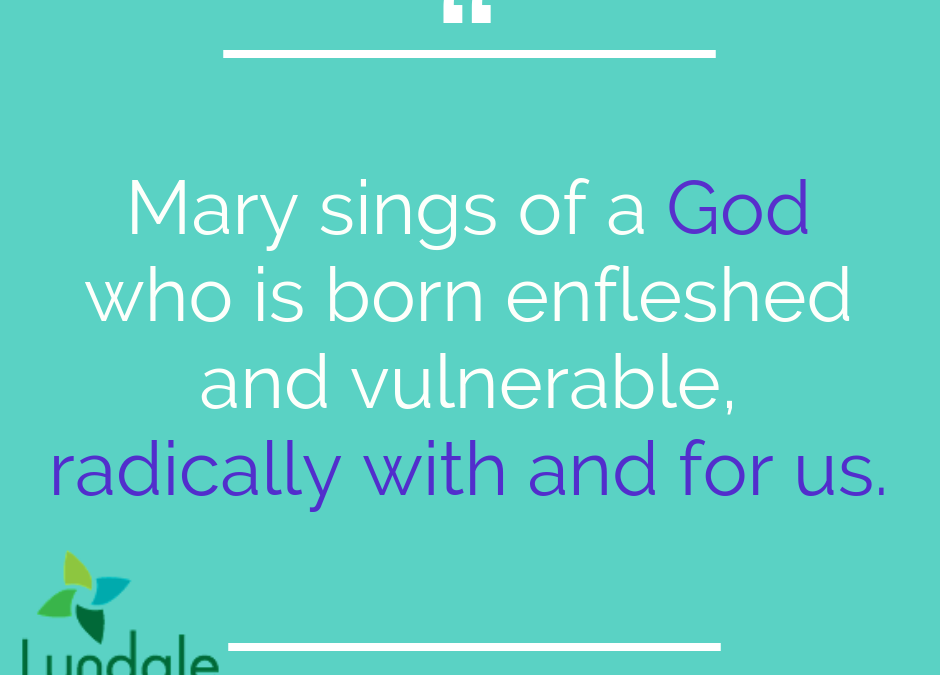 Every year, our Advent season begins with some apocalyptic reading, some naming of chaos, some world-rending violence. Some years, this seems a little ridiculous to me—or at least anachronistic. But some years, the naming of chaos, of violence which seems to threaten, of turmoil and anxiety, seems almost a moral imperative if we are to maintain any sense of our shared humanity. This is one of those years.

State sponsored chaos…Jamal Kashoggi, the Saudi-born, US legal resident and Washington Post journalist whose murder was ordered by Saudi Crown Prince Mohammed Bin Salman… the seventeen investigations which keep getting closer and closer to the sitting US President who seems more and more desperate… US Military troops shooting tear gas across the border at unarmed Central American refugees…

And personal tragedy: the fifty-one year old friend who entered hospice this week… the brilliant gay man who addiction and depression finally caused his death by suicide last week…

Both in the ambient national atmosphere and in the personal lives of many I love, it seems as if chaos and violence; sorrow and turmoil are the state of the world.

My soul proclaims your greatness, O God, and my spirit rejoices in you.

First Century Palestinian Jews were well acquainted with oppressive pain. Life under Roman occupation was marked by violence at every turn. In the decades before Jesus’ death, those who participated in an attempted revolt against Rome were executed by crucifixion and two-thousand of their bodies were left along one of the main roads into Jerusalem for all to see. Deeply unjust taxation left many Jewish families with barely enough to survive. And, into this context, a young teenage Mary, finds herself pregnant and unmarried.

I imagine her to be scared and desperate as Gabriel shares his impossible news. What about the religious laws against sex outside of marriage? The ones that carry the death-penalty if violated?

Both in her personal life and in the life of her community… the threat of chaos and violence surround.

And yet, after hearing Gabriel’s Annunciation, Mary’s response is to sing:

“My soul magnifies my God,
and my spirit rejoices in God my Savior…
for the Mighty One has done great things for me,
and holy is her name.
Her mercy is for those who fear her
from generation to generation.
He has shown strength with his arm;
he has scattered the proud in the thoughts of their hearts.
She has brought down the powerful from their thrones,
and lifted up the lowly;
he has filled the hungry with good things,
and sent the rich away empty.
She has helped her servant Israel…
according to the promise she made to our ancestors,
to Abraham and Sarah and Hagar and to their descendants forever.”

I think there are at least two answers to this question.

These past few weeks, I’ve spent time with many of you and with others for whom tears and grief seem our primary spiritual practice right now. Amidst the chaos and violence, mourning feels like the only appropriate response. As those we love suffer, crying and lament feels like the only prayer that is manageable or even moral.

And so, Mary’s ability to sing and praise struck me at first, as mocking the grief and sorrow and lament that such a time cries out for. Not only is Mary able to sing, but her soul magnifies God… her spirit makes God seem bigger through her song.

It seems so discordant with the situation she was facing and with the one in which we are living. So how is she able to sing?

The first answer, I think, comes in the time that elapses between the Annunciation and the Magnificat. Mary doesn’t hear the news and immediately begin to sing. In between, she retreats to her older cousin’s house. Just a few verses of scripture describe a time that may have extended for as much as six months. And I wonder, what kind of grieving and fear, what kind of being held and shared sorrow, might be contained in those few verses? Is it possible that the ability to sing that Mary embodies is a result of the shared lamentation that prepares her voice? Is she able to sing because she has first keened? I wonder…

As the story is told, Martin Luther King, Jr. was exhausted and scared. He’d had some real success in organizing but he’d also survived the fire-bombing of his house and the deaths of many colleagues. Many of his friends had told him what he was doing was too dangerous. It seems as if the fear of those closest to him and the silence of those who should be his allies were the things that really weighed on him. It made him scared. It threatened to immobilize him at times. And it caused him to be up, sleepless at night. In the midst of those anxiety-laden, insomnia-filled nights, he was known to reach out to his friends. One of those was Mahalia Jackson. When all he could do was grieve, Martin Luther King would call her and she would sing to him. Oftentimes it was “Precious Lord, Take My Hand… lead me on, let me stand. I am tired, I am weak, I am worn…” It was often the song of deep, deep grief, written by a man who’d lost his wife and infant child in a car accident that ministered to King.

Perhaps some of the Advent practice to which we are called is the honest and painful grappling with all of the chaos and destruction the world creates—hardships that seem to fall most heavily upon the most vulnerable among us.

My soul proclaims thy greatness of God, and my spirit rejoices in you…

Out of the fear and shared grief, bolstered by the love and touch of her cousin, Mary then, and only then, emerges and sings.

What does her song teach us—both about what she sings and how she is able to do so?

The Magnificat so often gets spiritualized. And the whole season of Advent seems to get reduced to waiting for the soft lights to break into winter’s dreariness and darkness. As beautiful as this is, it represents a domesticating of Advent and, far too easily becomes a decorating scheme to be purchased instead of the center of a radical gospel that has the power to transform the world.

Mary, and Elizabeth with her, understand that the Advent of God is nothing short of liberation. It is nothing short of healing and justice: the hungry are fed, the mighty are torn from their thrones. The very world is turned upside down. Systems which starve and impoverish most, and enrich and engorge few, are transformed. A deeply distorted and distorting Empire crumbles in the face of a vulnerable child, born to refugee parents in a homeless shelter.

And knowing this, Mary and Elizabeth, and all of us with them, are challenged to embody the reality for which we wait, here and now.

“Waiting for a birth that will turn the world upside-down demands preemptive action — that is what is at the heart of the Advent season. Anticipating what is to come, you live as if it is already here. Expecting this event, you embody here and now what it will usher into the world. More than just characters in the story leading up to Christmas, Mary and Elizabeth show us what it looks like when you realize that your life is about to change.

“Mary and Elizabeth realize the blessings that are about to arrive alter everything about now. They believe that when God fulfills God’s promises, no matter when that fulfillment happens, that truth makes a difference now. “

“What is broken God blesses,

not the perfectly brick-on-brick prison

but the shattered wall

that announces freedom to the world,

proclaims the irascible spirit of the human

rebelling against lies, against betrayal

against taking what is not deserved…

“We are all broken ornaments,

glinting in our worn-out work gloves,

from which shimmer our lives in their deepest truths,

blood from the wound…

the essence of our strength,

each of us a warm fragment,

broken off from the greater

ornament of the unseen,

then rejoined as dust,

For God so loved this beautiful and broken world that God came and dwelt among us. May we learn to Magnify THIS God with Mary.