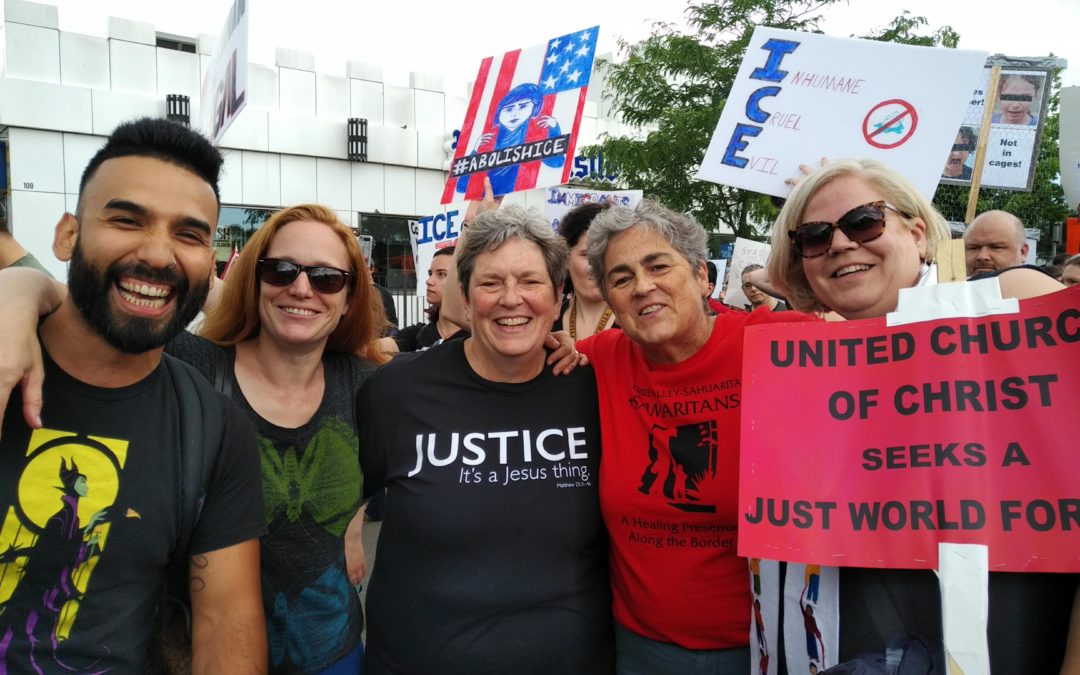 The end of June or 2019 was the one year anniversary of the mass protest in outrage over the Trump administration’s policies of separating families at the border, putting children in cages and practicing torturous actions against asylum seekers. Lyndale member, Mary Vanderford was one of the organizers for this year’s march and Rev. Rebecca Voelkel spoke at the rally. Many Lyndale folx took part as we continue to embody our Immigrant Welcoming covenant. Here is the text of Rev. Voelkel’s address:

“Before I begin, I need to give a shout out: As we marched down Lake Street today, five million people marched down Christopher Street on this 50th Anniversary of the Stonewall Uprising against state sanctioned violence. I am only able to be here because they paved the way for me and so many other LGBTQ folx.

“A little over 500 years ago, several Popes wrote letters to the kings and queens of Portugal, Spain and England urging them to go first to West Africa and then to the Americas. In both locations, these letters, which were really commands, told the white Europeans to try to convert any pagan or Muslim folx they encountered. If they couldn’t convert them to Christianity, they were ordered to kill them and take their possessions and land. These letters are known as the Doctrine of Discovery or the Doctrine of Christian Dominance.

“It is almost impossible to exaggerate the genocide, brutality and suffering the Doctrine of Dominance has caused. And one of its core practices has been breaking up families and separating children from parents. African American parents were regularly sold away from children during slavery by Bible-carrying, church-attending white Christians. Native children were, for several generations, stolen from families and put into boarding schools run by churches in order to “civilize” them. In both cases, sexual and physical violence were rampant.

“The painful truth is that what is happening at our southern border has happened before and it’s all been done in the name of God.

“And so, as a white, Christian pastor, I stand before you today to confess the truth of this violence done in the name of the collar and stole that I wear. The weight of the sin of genocide must be named–over and over again.

“I also stand before you to turn away from this violent and distorted version of Christianity and toward the gospel of justice and love. We call this turning, repentance.

“As part of repenting, is also important to name that the kind of Christianity that calls for genocide and dominance is bad Christianity, it is worshiping the false idols of capitalism and war. It is Empire Christianity, not the gospel of Jesus Christ which calls us to justice and love.

“The true gospel of justice and love also calls us into repair and reparations. And so, as we march and protest and powerfully resist, we must also continue the work of healing and repair and find ways for concrete reparations.

“I thank God for each of you and all of you. And may God bless us all in this sacred, holy work of resistance and repair. Que Dios nos bendiga en la lucha. Gracias.”