Tony on giving to Lyndale 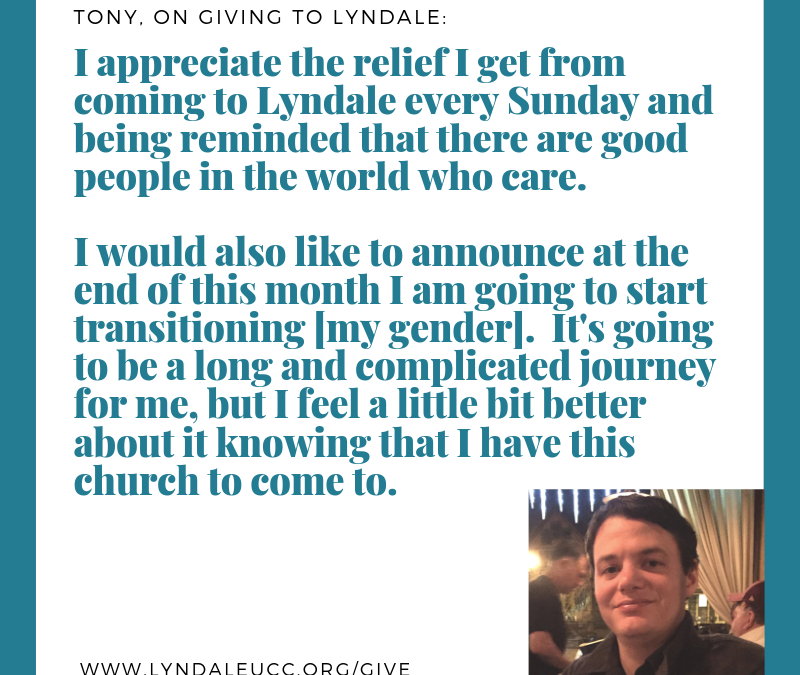 I always feel incredibly fortunate and blessed that I found my way into Lyndale.   I never really thought I would find a church I would feel comfortable going to on a regular basis given my background. I grew up in the south in the Bible Belt where religion is used more as a tool  to push agendas and allow hate. Being part of the lgbtq community and being exposed to this from young age really turned me off from the idea of organized religion. I’ve always had faith in God, but being raised Catholic I had no faith in the church.

Before I started attending Lyndale, it would have been close to 15 years before I attended a church. Then a good friend of mine suggested I come to church with her to Lyndale. It’s amazing what a passionate preacher and a congregation of kind souls can do to change somebody’s opinion on organized religion. I’ve never felt more accepted or welcomed by a group of people then I have been by this congregation. Nor have I ever seen a preacher put out a second collections plate to help raise money for a Mosque after it was attacked.

With all the madness in the world and hatred being spewed from the highest office of this country, I appreciate the relief I get from coming to Lyndale every Sunday and being reminded that there are good people in the world who care. I would also like to announce at the end of this month I am going to start transitioning. I’m starting hormones at the end of this month as some of you already know. It’s going to be a long and complicated Journey for me but I feel a little bit better about it knowing that I have this church and congregation to come to. Thank you all.