The Prodigal Child Has Gotten a Bad Rap 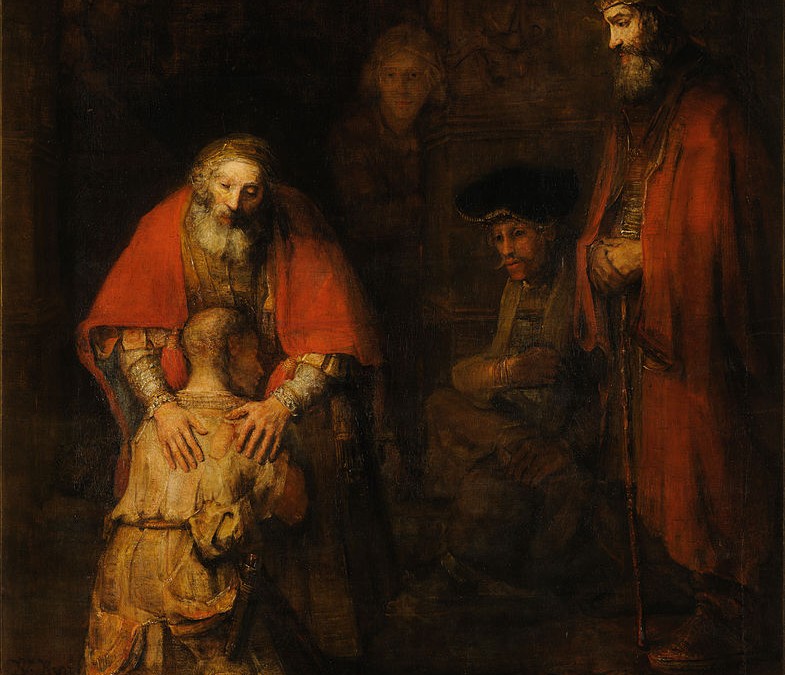 The rather mis-named Parable of the Prodigal Child. Many people suggest that in all great myths, fairy tales, parables each of the characters represents a part of ourselves. So, in our parable today, we undoubtedly have greater and lesser degrees of difficulty seeing ourselves in the rebellious younger child, the obedient elder child, and the parent trying to love both, so different, children within ourselves. But I am guessing, assuming actually, that each of us has met and wrestled with rebellion, obedience, and acceptance probably more than once regardless of our age.

Our story begins with the younger of two children, the so-called prodigal child. A young person asks her parent for the inheritance due her, goes far away and, quote, “squanders her inheritance in dissolute living.” The inheritance runs out, the economy changes, the young person is reduced to hunger and poverty. In a strange place and alone, she comes to herself, resolves to go home, apologize to her parents, and ask to be treated as a worker in the family’s business. And so she heads back home.

The story so far sounds like another example of what Joseph Campbell, a student of the world’s myths and religions, called “the hero with a thousand faces.” All over the world there are stories of a young person who leaves home, endures trials, acquires learning, and then (usually) returns home. In other words, the story to this point is what every young person needs to do. It is a story about growing up, becoming, as we say, one’s own person.

In the hero stories, the young person returns usually with new understanding, a boon, or gift for the community. But the gift of greater self-understanding is implied in our story. But I’m getting ahead of the story. Even after the parent runs excitedly out of the house, throws her arms around her daughter, presumably unable to overcome guilt and accept her place in the family, the daughter insists on confessing, “I have sinned against heaven and before you; I am no longer worthy to be called your child.” The parent? She calls for the best clothes and an expensive ring to be brought, and fine, comfortable sandals–maybe Merrills, don’t you think?

Perhaps surprisingly, all the rebellious sins of indulgence, loose-living, whatever they were, the parent didn’t even consider them worth acknowledging. The importance was the child-built barrier guilt created and parental joy. Confession evidently helped even if it interrupted the heartfelt joy over simply being alive.

That’s not all. The parent insisted on breaking out the most expensive bottle of wine in the house, preparing a delicious meal of organic, locally grown non-GMO modified food with a gluten-free option, good dancing music, a wonderful evening of celebration. In the joy of simply being alive, the self-created sense of guilt melts and, quote, “They began to celebrate.”

Henri Nouwen, a Dutch priest and teacher, reflects on the parable at this point: “From a dissipated life, coming home is claiming the truth… We no longer have to beg for permission from the world to exist…Homecoming is all about learning to love our incarnate selves, body and heart…the gathering of everything into oneness…we feel more whole, more contained, more one with self and the universe…we no longer need the other to tell us who we are or to give us an identity….we know we are children forever loved by our Creator.” We are, in a word, resilient.

But our parable this morning continues. Heading home from work and nearing the house, the elder daughter hears music and sounds of dancing. She learns that the parents are throwing a really great party because the younger sister has returned safe and sound. But rather than excitedly rushing into the house and telling her how happy she is to see her, the elder child instead, quote, “became angry and refused to go in.”

Remember, please, Jesus is telling this story to the scribes and Pharisees, to the good citizens, those committed to doing the right thing, the correct thing, the legal thing, the considerate thing. The story is for the good religious folk of his day.

Even when his father came out and began to plead with the elder son, according to the story, the son interrupted his father in anger, “Listen! For all these years I have been working like a slave for you, and I have never disobeyed your command; yet you have never given me even a young goat so that I might celebrate with my friends. But when this son of yours came back, who has devoured your property with prostitutes, you killed the fatted calf for him!'”

I don’t know about you, but when I meet myself in the close and holy darkness of deepest honesty, I can painfully understand all too well why the elder child would not join the family celebration.

Henri Nouwen again, “Resentment, the curse of the faithful, the virtuous, the obedient, and the hardworking, settles itself in the human heart and causes havoc.”

I remember an incident from decades ago. My parents and I were playing Scrabble in the living room at the cabin. A neighbor walked in. The game stopped and Mom and Dad welcomed and began talking with Dale. They talked, and talked, and talked. And the more they talked the angrier I got until finally I left the table and went into a room as far away as I could get. “How dare they ignore me and what we were doing! I’m their loyal, faithful, good son! I’ve earned at least their attention!” Besides, I was winning the Scrabble game which only added fuel to the fire of my resentment. I didn’t get angry until several years later and then growth began. I like to think of the elder son’s anger as a hopeful sign…but that’s another sermon.

A more serious example than Scrabble, involves my privileges as a white, well-educated, upper-middle class, heterosexual, and, I’m not absolutely sure what this means but I think it goes here, cis-gendered man. When I’m trying to be as honest with myself as I’m able, I dimly recognize a difficulty in accepting these as, in large part, simply accidents of birth. And the attitudes developed on this foundation of privilege–regardless of what they are, affirming or critical of these privileges–are hard to let go because, when all is said and done, I feel I’ve earned the attitudes I hold and, of course, they are correct.

Unconditional love cuts both ways. It is available to the younger child regardless, heedless even, of what she has done. Such love is ever offered to the older child. But the story poses the question whether the older child will be able to overcome himself and accept that his brother’s, or sister’s, or parents, or lover’s or anyone else’s actions do not merit the with-holding of love nor in any way do his deeds earn him love?

As for the parent in our story, unconditionally accepting much less celebrating both rebellion and obedience?….Fortunately we’re out of time and that’s a whole other sermon. Though I feel personally grandchildren have something to do with it.

The story suggests that guilt from what we have done in our rebellion is not easy to give up but celebration and dancing help. And the obedience of the elder child? Anger may be a helpful start.

Will I ever be able to join the celebration of unconditional love by letting go whatever it is within that insists I have to earn the air I breathe and the anger and self-pity this self-inflicted insistence so often engenders? The story ends with an invitation to unconditional love but the elder child still outside.

For myself, for us all, I end sharing this encouragement from Rainer Marie Rilke, the German poet:

“I would like to be you…as well as I can, to have patience with everything unresolved in your heart and to try to love the questions themselves as if they were locked rooms or books written in a foreign language. Don’t search for the answers, which could not be given to you now, because you would not be able to live them. And the point is to live everything. Live the questions now. Perhaps then, someday… you will gradually, without even noticing it, live your way into the answer.” May it be so.