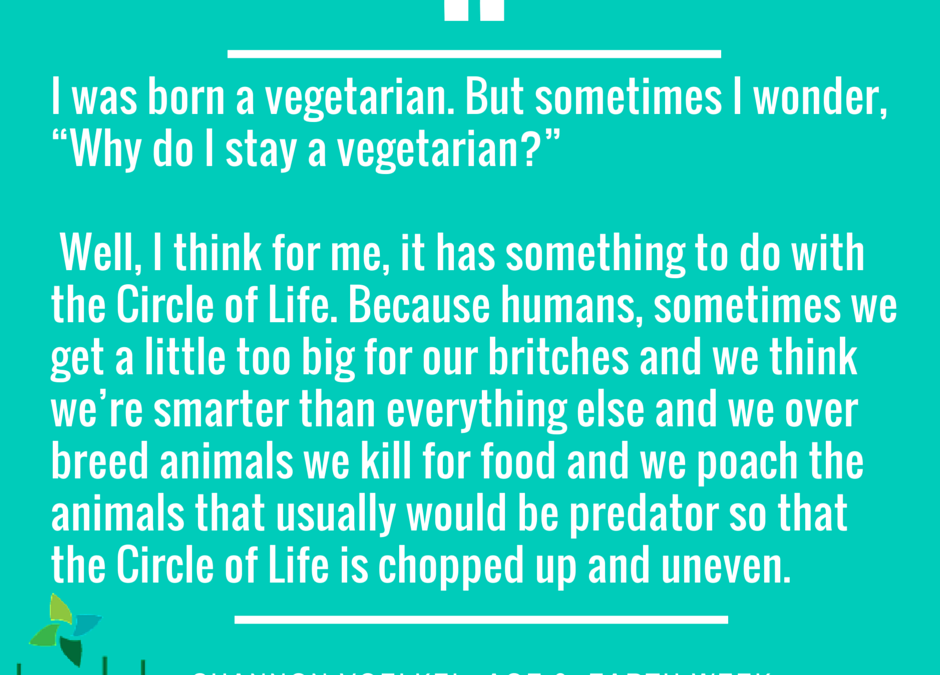 When I was telling Nancy Anderson that Shannon and I were going to preach today and that I didn’t know how people would feel about what we said, her advice was, “Ask questions!” So we’ve got some questions that we’ve asked ourselves but that we hope may start you thinking also.

What would it take to lead you to become vegetarian or vegan? It’s a question that I’ve been asking myself, and the journey to my answering it has not been easy.

Would it make a difference if you knew that a vegetarian or vegan diet is a healthier way to live? That it could prevent cancer, reverse heart disease, even cure diabetes? I’ve known that for a long time, yet it wasn’t enough for me. I’m a strong proponent of the principle that we should put on our own oxygen masks before trying to assist others with theirs, but I still didn’t become vegetarian even though I was convinced it would make me more healthy.

Would it make a difference if you thought it could help reduce world hunger? I grew up in a time when children were told to clean their plates because somehow that was going to help the starving children in China and India. That didn’t make sense to me, yet I didn’t explore it to determine what would make sense.  Then I heard the statistic that 82% of starving children in the world live in countries where grain is fed to animals in those same countries and that those animals are then killed and sent as meat to countries such as the United States and European countries. That made an impression on me. I know the world hunger situation is very complex, yet I can’t really dispute Howard Lyman, when he says, “The fact of it is, we could feed every human being on the planet today an adequate diet if we did no more than take the feed that we are feeding to animals and actually turn it into food for humans.” Or Will Tuttle when he says, “We’re growing enough food right now to feed about twelve billion people.” We have 7 billion people in the world, and yet 1 billion people go to bed hungry every night. That made it really hard for me to justify eating meat. “Teacher, when did we see you hungry and feed you, or thirsty and give you drink? …Truly I say to you, as you did it to one of the least of these my brethren, you did it to me.”

My son Keith became a vegetarian when he was in his teens, and I really admired his clarity and commitment, so when I told Kathy Hayden that I was going to preach on becoming vegetarian, and she said, “Why don’t you see if Shannon would be willing to preach with you?” I thought it was a great idea, and I was so pleased when Shannon agreed to do it, so she’s going to tell you about being a vegetarian from her standpoint:

I was born a vegetarian. But sometimes I wonder, “Why do I stay a vegetarian?” I see cookbooks, chicken looks good. I hear my friends saying, “Bacon is so delicious.” But why do I stay a vegetarian? Well, I think for me, it has something to do with the Circle of Life. Because humans, sometimes we get a little too big for our britches and we think we’re smarter than everything else and we overbreed animals we kill for food and we poach the animals that usually would be predator so that the Circle of Life is chopped up and uneven.

And I found a story that goes with the theme of the Circle of Life because it tells about how long, long ago, all animals could walk around and talk like humans. I think this story has to do with how God created us all connected to each other in a Circle that never ends.

I want to share the story with you now:

Long, long ago, the animals and trees could walk around and talk to each other just like we can… Now, gray squirrel was very ungainly and not the sharpest knife in the drawer. One day, she came to be sad about this. She came to sit down undernearth the Cedar Tree. She sighed and said to herself, “I am not good at anything.” The Cedar Tree said, “Why don’t you try to make a basket? Go fetch bear grass and bark and some of my roots.” Gray squirrel went and fetched these things. “Now weave these things together and make a basket,” said Cedar Tree and gray squirrel did it.

“Now, go the river and dip the basket into the water. If it holds the water, you’ve made a fine basket.” Gray Squirrel did this but the water rushed through the basket and she started crying.

Cedar Tree said, “Go out and ask the animals for ideas, for designs, for materials.” And so Gray Squirrel went out into the world as Cedar Tree had said.

She went to Cedar Tree and said, “I made a basket out of what you told me. And it worked.” Cedar Tree said, “Now, you must give it back to the earth.”

Then, Coyote came and said, “Humans are coming very quickly.” Cedar Tree said, “We must give these humans a gift. We will give the women weaving skills like Gray Squirrel has.”

For me, this story shows how even though we think we might be very different, we are linked to Gray Squirrel and all the animals in this way.

Thank you all for your time.

Okay, next question: Would you make different decisions about your diet if you knew that possibly up to 51% of global warming is due to animal agriculture, much greater than the whole transportation sector that is only 13%? That’s what an analysis by Robert Goodland and Jeff Anhang, two environmental advisors to the World Bank Group reported.

That seems incredible, especially when the world’s largest environmental groups are saying virtually nothing about animal agriculture, but Kip Anderson and Keegan Kuhn analyze it further in their book, “The Sustainability Secret” and they quote Demosthenes Maratos of the Sustainability Institute who says animal agriculture “is the largest contributor to every environmental ill known to humankind. Deforestation, land use, water scarcity, the destabilization of communities, world hunger—it’s an environmental disaster that is being ignored by the very people who should be championing its awareness.” Maratos goes on to say, “The most powerful thing that someone can do for the environment is to choose to stop consuming animals and live a vegan lifestyle. No other lifestyle choice has a further reaching and more profoundly positive impact on the planet and all life on earth.”

That’s what finally convinced me. I feel so fortunate to have grown up in such a beautiful world, and I want there to be a beautiful sustainable world for my children and grandchildren to live in. I believe I am called to care for Creation, not have dominion over it as the older translations of Genesis 1:26 say. The translation we read today is from a UCC Neighbors in Need publication: “Let us make human beings in our image, make them reflecting our nature so they can be responsible for the fish in the sea, the birds in the air, the cattle, and yes, Earth itself, and every animal that moves on the face of the Earth.” Not eating meat or possibly any animal products is something I can do every day to make a difference.

When my legislators refuse to pass laws to protect our earth despite my calls and letters, when marching for climate change results in nothing more than a 30 second spot on the TV news, changing what I eat is a change I can choose without waiting for anyone else to do something. Kip Andersen, in the documentary Cowspiracy said about being vegan, “I realized I had the choice-every single day-to save more than 1100 gallons of water, 45 pounds of grain, 30 square feet of forested land, the equivalent of 20 pounds of carbon dioxide, and an animal’s life—every single day. … When you take the animal out, you take the greenhouse gases out. … You take the food scarcity out. But one thing that’s amazing—you put your values back in. You put in values like compassion and integrity and kindness, values that are natural to human beings. You build that back into the story of our food.”

As I continued studying the situation, I read the book “The World Peace Diet” by Will Tuttle, and the imperative became even stronger for me. Tuttle talks about preparing and eating food as being an intimate and sacred act, pointing out the sacred food rituals of the Last Supper and Communion. Tuttle believes, though, that in our culture, our participation in the domination of animals for food requires a dulling of awareness that makes us insensitive to the beauty of the creation that we oppress. He says that when we are habituated to living off enslaved animals, we can more easily become habituated to viewing the enslavement of other human beings as acceptable, or that when we become habituated to the violence done to animals to put meat on our plates, we can more easily become habituated to viewing violence to other human beings as acceptable. He goes so far as to say there is such a taboo against even talking about this that we can quote “go to church assured that we will not be confronted by the discomforting entreaty to love all living things and to use none of them as things.”

Except at Lyndale Church! Does it make you stop and think to hear Jane Goodall say, “I wouldn’t eat a cow any more than I would eat my dog. And pigs are more intelligent than many dogs.” Or to hear Will Tuttle describe how animals in nature “play, sing, run, soar, leap, call, dance, swim, hang out together, and relate in endlessly mysterious ways?”

Tuttle outlines a beautiful vision for the world:

“Consciously adopting a plant-based diet, becoming a voice for those who have no voice, we can attain greater compassion and happiness and live more fully the truth of our interconnectedness with all life. We can all make a most profound contribution to cultural transformation and world peace with our meals, which are our most vital connection to our culture and to the natural world. …By consciously making our meals celebrations of peace, compassion, and freedom, we can sow seeds in the most powerful way possible to contribute to the healing of our world.” That’s the vision I am feeling compelled to adopt.

So that is my journey to becoming a vegetarian and hopefully with time, a vegan. Mary Oliver said, “One day you finally knew what you had to do, and began, though the voices around you kept shouting their bad advice.” It’s what I have to do for me, but one report I read claimed that 2000 people are becoming vegetarian every day, which gives me great hope, and a study by researchers at Oxford University just released in January claims that the world could cut greenhouse gas emissions by 29% and save 1.5 million lives annually if meat consumption globally were reduced by half by the end of the century. Kip Andersen says, “Like any social revolution, a seismic shift in how we feed ourselves seems impossible—until it becomes inevitable.” I am praying for that social revolution, starting right here at Lyndale Church. I look forward to the day when all of humanity will bring into reality the truth in the words of Luciano De Crescenzo, “We are each of us angels with one wing, and we can only fly by embracing each other.” May it be so.