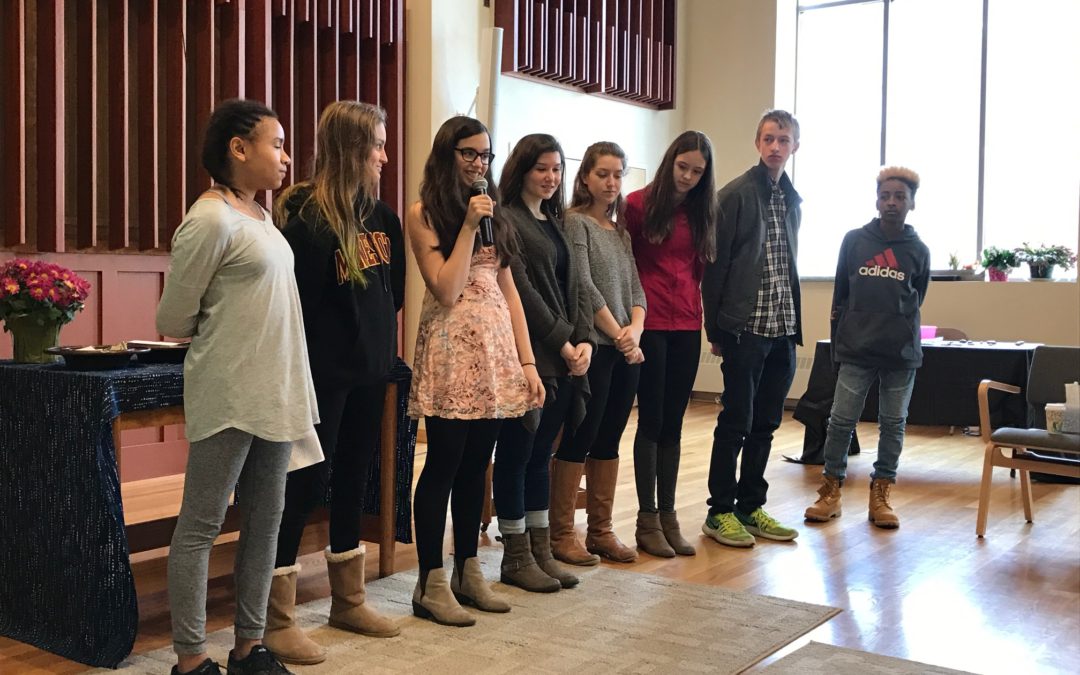 Empowerment is not always a feeling that overwhelms you and fills you up.  It can come when you’re least expecting it and it’s not always obvious or apparent right away. But….sometimes it is. This past January I had the privilege of going to Washington DC for the Women’s March on Washington. The trip was a total of about 3 days, the majority of which was spent on the bus, so the time in Washington was precious.

We woke up Saturday morning and headed to the march in high spirits. As we walked to the start I saw more and more groups of women and men in pink hats join us on our way to the march. I went in with no expectations and I was anxious to see what the march would be like. I had never been to a protest of that size and with the recent inauguration I didn’t know what the energy or atmosphere would be like. When we arrived we were met with beautiful chaos. There were people everywhere, each with their own witty sign excited to show that they were standing up and fighting for themselves. The rally started with a women singing a Native song. The power of her voice swept across the crowds and I felt a deep sense of calm and God’s love. The rally continued with each new speaker inspiring shouts of praise and agreement. Each one brought hope in their own unique way and assured us that we had the power to make a change and that we were not alone in our struggle. They also made it clear that we had to stand together and not back down. I learned from those speakers to believe in myself and my abilities because without that confidence I would never have the power to keep fighting for my rights.

When the march started I could barely move. People were packed together for blocks and blocks. I remember thinking how truly amazing it was that thousands of people, each with their own reasons and motivations, had come together as one to fight the injustice against women. I couldn’t help but feel the overwhelming sensation of inspiring confidence. Those people may not have known it but each and everyone of them had given me something wonderful; empowerment.

Empowerment can be defined as “authority or power given to someone to do something” or “ the process of becoming stronger and more confident, especially in controlling one’s life, and claiming one’s rights.” I find that empowerment shows up most in times of hardship, when people have become powerless, or find themselves unable to claim their rights. It is in these times that being empowered is the most important. Empowerment can be found in the simplest forms, in small resistance, and connections. Or it can take shape in mass movements, spreading across communities and nations. I have felt most empowered in these movements, standing next to thousands who have sensed the same hurt, felt the same rage, and have committed to responding with empowerment. For me, empowerment is spreading that confidence, that control. The ability to claim one’s rights. I feel empowered when I know that I can make others empowered as well. Empowerment is not for some. It is for all. Empowerment gives me hope, and determination. It is standing up and saying “ I am strong.” “I have power.” “I have a voice.” Saying these things out loud, acknowledging them, is half the fight. Empowerment is pushing through those who try to silence, to diminish. And so I have no choice but to spread empowerment. To be empowered. I have no choice but to defend my rights. My rights as a women. My rights as a student. As the granddaughter of German Jews. And as a human being on our precious planet Earth.

Who here procrastinates or at least has procrastinated? Yeah well, I hate procrastination, yet, I did procrastinate this and when I finally did it, it was 12:30 a week ago and it was after being crushed by my whole family in a game of Dominos and a freak out over my lost cat and it worked for last week, soooo…. (intake of breath into laugh).
More to the point, I think that to feel empowered, you don’t have to do some big thing like a march or go to a protest, I mean, thry don’t hurt, but I’m not saying they’re required. I believe that little things can make you feel empowered, like getting to the top of a big hill on your bike in summer, and apparently February (gesture to window), or finishing all your homework or a book or perhaps listening/writing/singing a song (which I know some of us don’t have a problem with ~Rebecca~). When I asked my parents they said that they felt empowered when they had successfully helped a kid learn how to speak, or seen them do something that they’d not seen before. Maybe it could be finishing a speech for, say, I don’t know, church. What I’m getting at, is that empowerment doesn’t necessarily have to come from going up against global warming and it doesn’t have to be political, it can be the small things that make us feel good about ourselves and make us thrive.
I was supposed to think of a time that I felt empowered, so, I came up with times. Yes I felt empowered at the Women’s March on D.C., and yes I felt empowered when I do things with MNIPL, but the most powerful empowerment I’ve felt has come from expressing myself. As you may have noticed, I like to talk, and draw, and talk some more, but when I do either of those things for a purpose, I try to make people think and feel engaged and want to listen and above all, to be motivated. I feel empowered when I make others feel empowered. I feel empowered every time I come up here and feel like at least ONE person is listening and absorbing my words (and laughing when I make a joke, (“whispering”) let’s me know they’re listening). I love public speaking, even finishing this speech I was shivering in my chair (only partly because I was cold). But I love that feeling that someone walked away with new thoughts in their head. And I love drawing, as you can see on your bulletin, I try to make people feel involved and together with the other people around you. (pause, exasperated) I’m running out of synonyms that all really just mean the same thing.
My AP Literature and Composition teacher says you should always try to end your essay with a call to action or at least something powerful; so here’s mine. If you haven’t already, find your empowerment, big or small, and try to remember that behind every big thing, there must be small things to support it, (short pause) so I suggest you start stocking up.
Thank you.