You are the “zing” of the earth. 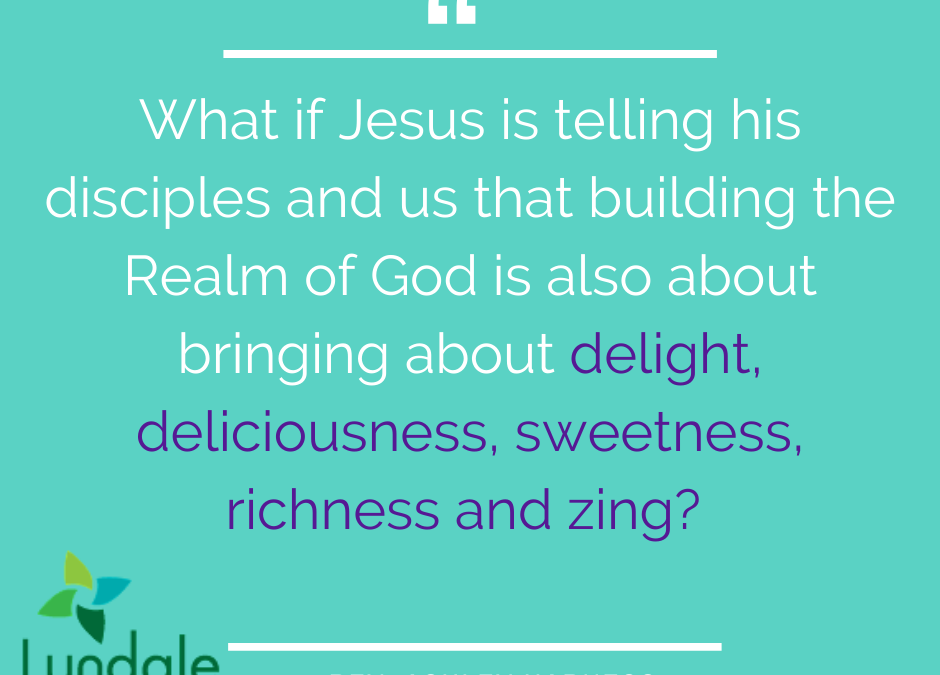 This has been one of those weeks. I’ve sent out more prayer requests to you all in the last week or so than in the last few months, meaning things are tough on the home-front for many of us. And it has been beyond what I anticipated by a good distance of crappy on our national political scene. I want to hide out under the blankets and eat ice cream and watch the West Wing. Confession: I did exactly that more than once this week. Because as a white Christian who is a US citizen with an advanced degree and housing security and a job with health insurance (thank you!), I have enough privilege to hide sometimes.

But it is precisely the whiteness and the Christian-ness of who I am in the world that means I have to get off the couch. When the President acts to build a white nationalist empire buttressed by Christianity, and I really believe that is what is happening, I cannot stay on the couch.

“The American nation was carved out of the vast frontier by the toughest, strongest, fiercest and most determined men and women ever to walk on the face of the Earth,” Trump said [in his State of the Union Address], as though such conquest wasn’t financed by slavery and didn’t involve the horrific annihilation of the indigenous people …,”

as a Washington Post Opinion piece by Jonathan Capehart, a black columnist, put it.

“And, ladies and gentlemen, our ancestors built the most exceptional republic ever to exist in all of human history, and we are making it greater than ever before.” [Capehart continues his analysis:] When the words “we” and “our ancestors” tumble out of Trump’s mouth, the hairs on the back of my neck stand on end. For his “we” and “our” come off as a clarion call to whiteness… Need I remind you that Trump said that the neo-Nazis and other assorted white nationalists who unleashed racial and anti-Semitic terror on Charlottesville in 2017 included some “very fine people”? During an Oval Office meeting the following year, he referred to a group of nonwhite nations as “shithole countries.” Last summer, on Twitter, Trump demanded that the four congresswomen of color who make up “the Squad” “go back and help fix the totally broken and crime infested places from which they came.” Never mind that all four are U.S. citizens, and three of them were born in this country.”

That was just Tuesday. And then there was the National Prayer Breakfast on Thursday. And a call from a member of our President’s own political party to love our enemies. This isn’t romantic or simple love. This is agape Love, the love of God. It calls us to try to see our enemies as God sees them, with the perspective of Love. And our President, who claims to be Christian, dismissed this striving with gusto and a tirade. And then went on to imply that anyone at this bi-partisan event who didn’t support him wasn’t really Christian.

Cue blankets and ice cream. I’m grateful for wise friends who call us to other possibilities. My friend, Rev. Dr. Jennifer Harvey, shared this gem on Facebook yesterday:

“A practice: Each time you/I want to shout, “we’re screwed!” “there’s no way we can win!!” … try looking at whether, in fact, it would be more true and authentic to put it this way: “I’m frightened.” “This feels hard.” “I feel betrayed and worried.” “I’m confused about the best way to focus my time and energy.” “I am traumatized by how relentless this all is.” “I feel helpless.”

Let’s see if the kinds of self- and collective-care, and connections and movements, that these (I suspect) more truthful but/and vulnerable ways of talking about what we are going through, might open up and bring into existence precisely the care/connections/movements that we need to succeed in creating real flourishing today—but also for our tomorrow . . . might open up the kinds of care/connections/movements that help us know precisely what to do at each next step …”

Which leads me back to our scripture instead of just wanting to throw the Bible across the room because it sometimes just feels like a tool that helped build the Master’s house. And as we know from Audre Lorde, “the Master’s tools will never dismantle the Master’s house.”

But that’s only true if we have historical amnesia. Let’s remember some context here. Jesus’ people were Jews, exiled and returned, whose temple and land were occupied by Rome and its religion of imperialism. Different movements within Judaism grappled with different responses to this horrifying reality. Should we cooperate with the occupiers to survive? Should we fight back with the weapons of war they are using? Should we keep our heads down and go about our lives until the fury passes? What should our resistance look like? How do we preserve our most cherished values and ways of living when every day a new assault rains down? Sound familiar?

But here is an important difference. We are not in the minority religion position as Jesus’ followers were. We actually share the religion of the emperor of our times. At least in name. Which gives us a different power and also demands a different responsibility. We must be salt for the earth and light for the world not only because our souls depend on it, but because it is lethal to others if we aren’t.

What does it mean to be salt? Samin Nosrat grew up in San Diego in an Iranian-American family. You might know her as I do from her famous Netflix series and cookbook of the same name, Salt, Fat, Acid, Heat. Here is a glimpse of how she describes the purpose of salt:

“…One day, as a young cook in the prep kitchen, I was tasked with cooking polenta. … The chef, Cal Peternell, talked me through the steps for making it, and I began cooking… After an hour and a half, I brought Cal a spoonful of the creamy porridge to taste, looking up at him with equal parts respect and terror. “It needs more salt,” he deadpanned. Dutifully, I returned to the pot and sprinkled in a few grains of salt, treating them with the preciousness I might afford, say, gold leaf. I thought it tasted pretty good, so I returned to him with a spoonful of my adjusted polenta.

This time he marched me back to the pot and added not one but three enormous palmfuls of kosher salt. The perfectionist in me was horrified. I’d wanted so badly to do that polenta justice, and the degree to which I’d been off was exponential. Three palmfuls!

Cal grabbed spoons and together we tasted. The corn was somehow sweeter, the butter richer. All of the flavors were more pronounced. I had been certain he had ruined the pot and turned my polenta into a salt lick, but the term salty did not apply to what I tasted. All I felt was a satisfying zing with each mouthful.”

“You are the salt of the earth,” Jesus told his disciples, his students. Or in the language of Samin Nosrat might, you are the zing of the earth that brings out the authenticity of everything and everyone we encounter – the sweetness of the corn, the richness of the butter.

I don’t know about you, but part of what makes me want to hide under the covers with my ice cream is that it feels like the ways I’ve been taught to change the world, to protest, to seek justice, to change policy, aren’t working. This isn’t to say we need to abandon the means we have. Goodness, mercy on us I want us to do them better.

But I also want something different. I want us to figure out together what it means to be the salty, transformative zing in our personal lives and our political lives and our religious lives. I want us to stop being perfectionists, hoarding our saltiness like gold. I want us to trust our prep kitchen teachers who are telling us to boldly throw in exponentially more saltiness into the world. I want us to have true companions who walk with us when we are scared and feeling helpless and teach us to taste what we’re making and see with our whole selves how its doing. And if we have made some delicious together, something that is not just better for us but truly something that makes our proverbial tastebuds water because it brings us real joy, real satisfying zing, then I want us to learn to pick up the light we’ve been hiding under the basket and go nextdoor to share that Good News with each other.

As the Spanish Roman Catholic priest Raimon Panikkar said, “The future will not be a new, big tower of power. Our hope in the future is … well-trodden paths from house to house.” Bring that deliciousness, that joy, that zing of an idea or practice to your neighbor, to this community, to a friend and see if they have anything to add to make it even better, more delicious, more irresistibly good. This is how we got two new ministries at Lyndale last year – the monthly moveable lunch feasts traveling around to different restaurants across the Twin Cities and our Harry Potter as Sacred Text nerd squad. It wasn’t out of obligation or a committee structure, but by throwing some more salt out there to see what would happen, to see if anyone else was hungry for it and if it could be more delightfully delicious together.

Chef Dan Barber, a local food movement advocate and founder of the Blue Hill restaurant in NY, frames the challenge of these times this way: “It’s just hard for Americans who come from the puritan idea that everything that’s virtuous requires sacrifice. It’s hard to talk about… serious issues in the context of pleasure and delight.” But pleasure and delight motivate us! That’s why he thinks local food movements are succeeding – because the result is tangibly delicious. What about the rest of our movements? The sacrifice, the grind, the fear, the anger alone isn’t going to get at least me off the couch anymore. And I don’t think I’m the only one.

My friends, I wish I had more than metaphor for you this week. But in times of crisis when all the ways we have been doing all the things feel broken, or not enough, or just too exhausting, sometimes metaphor is the only language spacious enough to contain possibility, even if it feels frustratingly vague. So let’s try it. What do we have to lose? What if Jesus is telling his disciples and us in this scripture that building the Realm of God is also about bringing about delight, deliciousness, sweetness, richness and zing? May we be bold enough to taste and see. Amen.