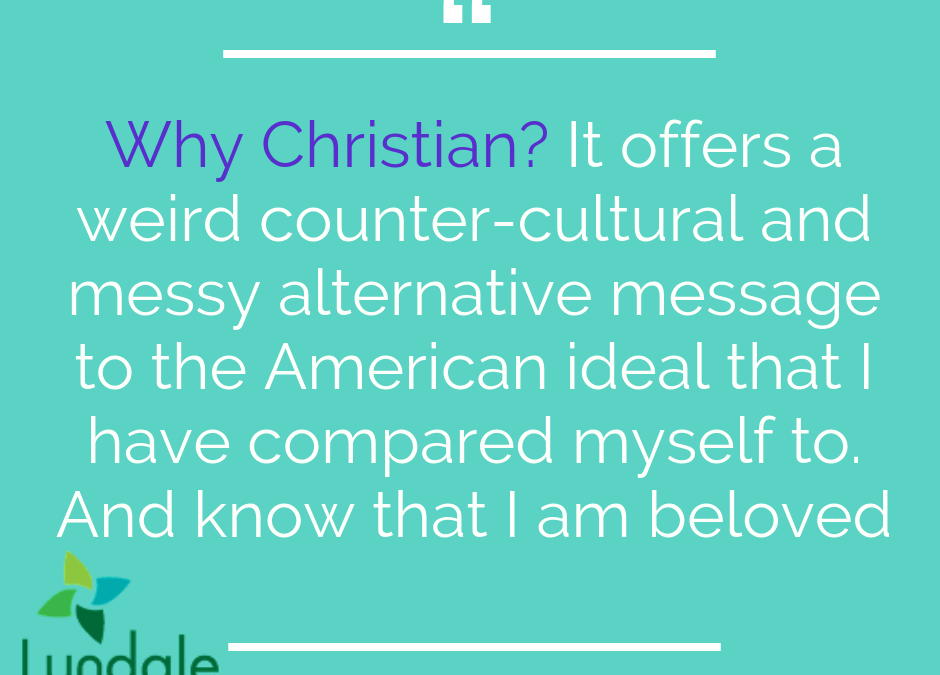 And when he got into the boat, his disciples followed him. A gale arose on the lake, so great that the boat was being swamped by the waves; but he was asleep. And they went and woke him up, saying, ‘Lord, save us! We are perishing!’ And he said to them, ‘Why are you afraid, you of little faith?’ Then he got up and rebuked the winds and the sea; and there was a dead calm. They were amazed, saying, ‘What sort of man is this, that even the winds and the sea obey him?’

Why Christian? I think for myself to answer that I need to talk about my family, two months in the Philippines, and Scripture. Also, during my time in the Philippines, I experienced a lot of stories of death and will be sharing a little bit about that today. If anything causes you pain, comfort, or you need to step away or disengage. Please do. In this place we bring our entire selves including the parts that we keep hidden away.

My faith began at home in a far land across the Mississippi called Shoreview, a suburb of Saint Paul. With my two sisters, grandmother, aunt, my mom and my dad under one rooftop, things were a little tight in a three bedroom house for seven people. Although, I think we survived by celebrating the Filipino culture as family meals included egg rolls, noodles, and our birthday parties weren’t truly a party until the Karaoke machine was busted out. We respected our elders with intentionality, as I addressed my sisters as, Ate Becky and Ate Katy Jo and my mom’s friends with Tito or Tita. Growing up I thought these traditions were weird. We were bound to each other in our family, beyond our stupid fights.

Sunday mornings were intense as we were somewhat coerced to be dressed to the tee for church at the Presbyerian church a mile away from home. But, Sunday, it was expected that we would be there each and every Sunday morning. That was our norm it was the expectation. And the people and building of Presbyterian Church of the Way was a second home for me.

Growing up, was interesting as well, in grade school I danced competitively across the region, doing fun tap, ballet, and jazz and actually did relatively well and LOVED IT. I just personally wish I still had those skills. But when I wasn’t at dance practice, I was maneuvering different social spheres at school as I was forming my own identity. From one year, being with the Asian group at school. But then not feeling Asian enough to actually be with them. hen being with some football players, until it dawned on me that I felt like I couldn’t measure up to them due to my statue and generally being a better football than a teammate. Then being with the  rebels, then realizing that because I was a Christian, I could not align and be with that group and cut them out of my life.

There was one place where I did feel like I did belong. And that was within my church community as I navigated through the waters of identity searching and figuring out who I was.  I was surrounded by authentic role models and leaders. I had conversations with my youth group leaders constantly, as we processed goals and my future. And the rest of the youth group helped me feel like I was enough. And I didn’t learn this through a curriculum. I learned this from encountering people that reflected a Jesus that loved, affirmed, each and every single layer of my humanity.  There I was at home.

After high school, I went to St Cloud State University, As I was bouncing around majors. I started out as a math major and switched over to communication studies when I realized I hated math. Then I switched to nursing because of the archetypal Filipino expectations. For some reason, Jesus kept on bugging me underneath and with those other voices saying, “Hey, you’re called to do ministry. You don’t really know what that means. You don’t know what that looks like. But that’s what you’re going to do.” And going on a tour at Augsburg University with a friend, introduced me to the Youth and Family Ministry Degree. Which led me in transferring to Augsburg College now University, and I guess here!

One moment, or the beginning of many moments that help me answer, “Why Christian?,” started in the library at Augsburg when I was stressed from school, working too many hours, and simply burning out and wanted an escape. So I signed up for a mission trip with a non-denomational Christian community in the Philippines, got accepted, fundraised, and was enroute to be in Manila, also the relative area that my own family still resides in.

But then that fall, specifically on, November 8th, 2014, Typhoon Yolanda, internationally known as Typhoon Haiyan hit Leyte, an island in the middle of the Philippines… an hour and a half flight and 24 hour drive south from Manila the capital.  NBC stated that the typhoon had sustaining winds of 195 miles per hour, gusts that reached 230 miles per hour, speeds higher than Hurricane Katrina. Underneath the eye of the typhoon, was Tacloban, a city that got hit with unpredicted and unprecedented tsunami like-surges of water that reached 17 feet high rolling through the city.  A city with homes not built like the homes we have here. They were not homes built for typhoons. They were homes built out of bamboo trees, tarps, and tin roofs. The waves had a domino like effect to the city by having debris from already crushed homes continued to obliterate everything in its path.

The strength of Typhoon Haiyan affected over 9 million people, displaced 600,000 people and endangered children to human trafficking, and killed thousands, as it included kids… adults… babies… parents… … and entire families…  And if the typhoon didn’t directly kill… sicknesses like pneumonia after the typhoon killed the elderly and the young… my great-grandmother living two islands away was an example of this…

8 months after the typhoon plans my mission trip was reverted from Manila to Tacloban because of the prevalent needs in the city. And in the city, I was able to participate in community feedings, going on tours of the city, I assisted a social worker from the Christian organization I was with by compiling his results of his surveys, and also some construction work.

But throughout my time there, I consistently wrestled with what the purpose of my role was, while being in the Philippines role as myself as I heard and saw things that shook me to my core:

It wasn’t until after coming back home from the Philippines that I realized how much I needed to process my time there. So quickly after returning back home I went back to therapy and it was there that I learned that I had acquired secondhand PTSD and had to learn how to live with it.

But also with both therapy and luckily within my studies at Augsburg, I learned how much I had othered people and even the Filipino culture woven through my  life. And through this processing and unveiling of myself, and as a somewhat “public figure” living into the false and deathly expectations that ministry leaders need to have a strong faith on the clock 24/7 and a perfect yet also a plastic human being.

Gustavo Gutiérrez a Peruvian theologian, and Dominican priest regarded as one of the founders of liberation theology mentioned in his writing, “Conversion: A Requirement for Solidarity,” that, “If we love others, we love them in their social context” but this is something that we do not only by ourselves, but by the entire church. This is something that I was bad with and continue to struggle with. But “Why Christian?” Because to be Christian is to share an experiential love that binds us together, from the core within us.

From the Scripture that Keegan shared, I once heard it said that the disciples on the boat didn’t lose their faith in Jesus. They lost the faith that they had for themselves.  For, the folks on that boat, were used to their boats. They knew what they were made of. They knew who made them. They knew how to fix them. They’re used to the waters. And I trust that Jesus knew this. And I believe that Jesus fell asleep, not out of spite, but out of the trust or faith Jesus had for the disciples. And for his deep desire to know and love these people too.

From growing up, I was not loving myself from my social context. Mainly because, I simply didn’t know from a lack of representation and homophobia. But I didn’t know how to enter into a love for myself as Filipino, queer. But it surely is a trying time.

Why Christian? Because it asks me to trust in myself. To know that there are aspects of the world that I can handle. And when I can trust myself, I can enter into the solidarity with Christ that calls me to rest.

But now, when posed with the question of, “Why Christian?” I think it’s easy to say. I can’t keep it within a minute. But my life up to this point has taught me that to answer these two words that: