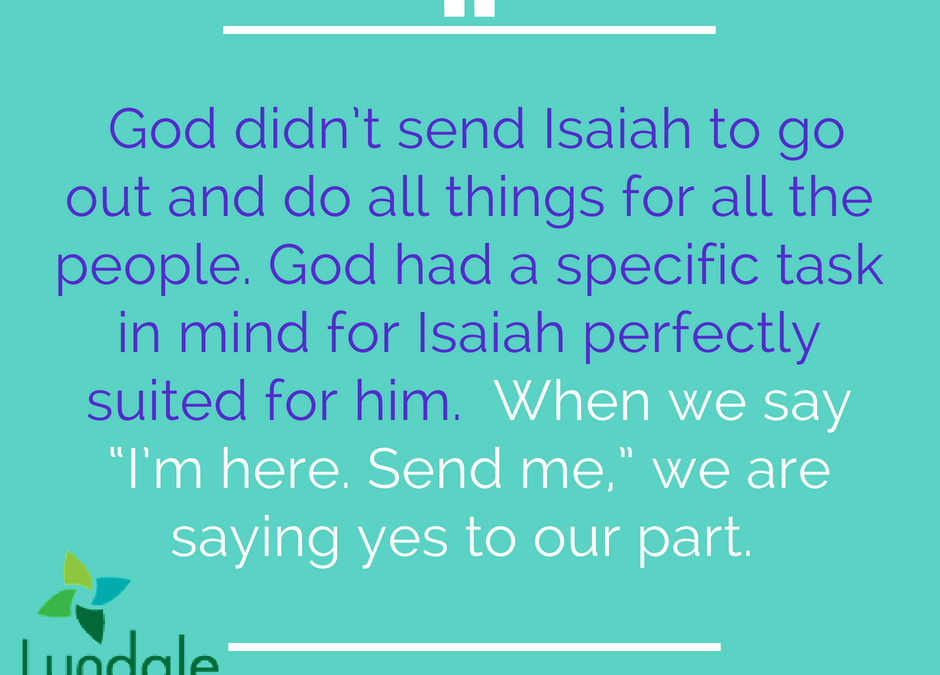 Smoke. Doves. Tongues of Fire. Six-Winged creatures. The images used to illustrate God’s call to Isaiah we read today and the images that are used in the story of Pentecost or the beginning of the church that was celebrated – make quite the story of call or beckoning into ministry! It’s an intimidating story to live up to!

I don’t know about you, but the way I got here was not quite so dramatic. I got here because going to church is just what my family did. I got here because I lived down the street. I got here because Mary Vanderford invited me to plant dahlias with her and then Elly Wegner gave me a ride to the Minneapolis Institute of Art for a special exhibit she was participating in. No speaking in tongues. No fire. No winged creatures. I just sort of… arrived. This seems a little anti-climatic in comparison. It makes it hard to relate to the burning bushes and voices out of a windstorm that God is depicted as calling from in different parts of scripture.

The past few weeks, I, along with many of you, have been attending trainings and protests with the Minnesota Poor People’s Campaign. A revival of Martin Luther King, Jr’s work 50 years ago. As our leaders guided the group in discussions on our connections to the issues of demilitariazation, economic justice, racial justice, and ecological justice; talked about what to expect when you are expecting getting arrested; the history of justice movements; and other such subjects, I heard those seated around me site quotations from feminist scholars and social justice warriors of old. Seasoned activists recalled their first forays into this holy work setting up Resurrection City in 1968 (I had to look up what that was, exactly) and hanging out with the Catonsville 9 (I also had to look that up.. may be you will too now… and that’s OK). It was… intimidating to say the least. It became very clear that my history classes skimmed over quite a bit of American history.

It left me feeling unsettled. Who am I to participate in this big thing – this thing that will impact so many people depending on the campaign – when I had no idea about so much? Who am I – a middle class white woman – to speak about immigration rights … and Yet, when we return to the story of Isaiah, this is exactly the prophet’s response. “Mourn for me; I’m ruined! I’m [one] with unclean lips, and I live among a people with unclean lips.”

Isaiah was a prophet of the 8th century BCE and he was a person of privilege. He writes with a high poetic style. He seems to have rubbed elbows with Jerusalem’s elite.[1] He had access to the leaders of the Jewish people and he came to them with an important message. Israel was a divided kingdom at the time – North and South.[2] Isaiah saw the impact of division and corruption and maltreatment of women, poor, orphaned and vulnerable and warned the leaders that this corruption would lead to dire consequences for the Jewish people – namely, the invasion of the Babylonians and Assyrians.[3] While Isaiah had more of a 1-1, moralistic, cause-and-effect kind of view for God’s actions in the world, as was prevailing worldview in this ancient time, Isaiah had important things to say about how people were treated in his community. To paraphrase Walter Bruggemann, a prominent Old Testament scholar, Isaiah wanted to put the “shalom” (a Hebrew word connoting peace and welcome) back in “Jeru-salom.”[4]

The prophet Isaiah saw the corruption that surrounded him among the elite in his community. He “lived among a people with unclean lips.” And yet.

And yet he preached a word to them.

And yet he had seen the King.

And yet he was witness to the force of the Divine in that inner room of the temple.

In the white privilege training that Lyndale undertook last fall, Pastor Rebecca drew an illustration for us. She drew many concentric circles on the white board behind her. She told us the innermost circle and the outermost circle represent extremes of viewpoints. The social justice warriors and the KKK, for instance. The circles in between showed the spectrum of beliefs between those viewpoints. While the extremes of these concentric circles are not going to be impactful on transforming the other, we were asked to think about where we fell on the spectrum and know that the people in the circles directly surrounding us would be the ones we would most likely influence and could have productive dialogue with. Just as Isaiah spoke a Word to those that surrounded him, we are called to speak the Truth to those who we are surrounded by. We live in a society of those with unclean lips. We ourselves have unclean lips. And yet… and yet we are called.

Annie Pho is an activist librarian. In an article,[5] Pho addresses the anxiety and feelings of inadequacy many high-achieving women deal with that has com to be called “imposter syndrome.” First coined by psychologists Pauline Rose Clance and Suzanne Imes in 1978, Imposter Syndrome is the fear of being found out as “phony” or “fraud” and can lead to burnout and a lack of self-confidence in general. Like when you write a sermon and you feel like you have nothing of depth to say, or when there’s a promotion up and you think you’re just not right for it or you’re asked to join a movement and feel like you don’t know enough or being a parent or trying to put together a big project or apply to school or feel like you’re the only one in your Zumba class that doesn’t know what’s going on. Pho was wary about labeling herself an “activist librarian” as others had done for her but through finding her place in the multiple ways being an activist as a speechgiver, protester, data enterer, writer, designer, supporter, or one of many other roles and by distinguishing between an actual lack of skills and just feelings of incompetence, she eventually wore the mantle proudly.

There were many Old Testament prophets who we might diagnose with “imposter syndrome.” Moses was concerned with his public speaking ability.[6] Esther said that she can’t see the king without an appointment or invitation first.[7] Jeremiah thought he was too young.[8] We all have our reasons – too young, too busy, too risky, too stressed, too old, or too “unclean” as Isaiah says… Isaiah, though, also had a vision of forgiveness. Of empowerment. “6 Then one of the winged creatures flew to me, holding a glowing coal that he had taken from the altar with tongs. 7 He touched my mouth and said, “See, this has touched your lips. Your guilt has departed, and your sin is removed.”” What a relief – to know that we can stand up from our guilt – the unsettledness we feel about our white privilege, our inexperience, our phony-ness – and say, “I’m here. Send me.”

Now, it would be understandable to be overwhelmed by this request to say yes, but God didn’t send Isaiah to go out and do all things for all the people. God had a specific task in mind for Isaiah perfectly suited for him. Reading further in this Old Testament chapter, God asked Isaiah to speak to the people of Israel so that they may hear and understand and be healed. Isaiah had his part to play, as do we all, but it is also one of many. When we say “I’m here. Send me.” we are saying yes to our part. We can do our part to make space in the world for God to do God’s own healing work. May we not forget who is the true Actor here.

Spiritual author and lecturer Marianne Williamson shared an insight that flipped this fear of imposter-ing on its head. Instead of asking “Why me?” we are to wonder “Why NOT me.” Williamson writes:
“Our deepest fear is not that we are inadequate. Our deepest fear is that we are powerful beyond measure. It is our light, not our darkness that most frightens us. We ask ourselves, ‘Who am I to be brilliant, gorgeous, talented, fabulous?’ Actually, who are you not to be? You are a child of God. Your playing small does not serve the world. There is nothing enlightened about shrinking so that other people won’t feel insecure around you. We are all meant to shine, as children do. We were born to make manifest the glory of God that is within us. It’s not just in some of us; it’s in everyone. And as we let our own light shine, we unconsciously give other people permission to do the same. As we are liberated from our own fear, our presence automatically liberates others.”[9]

Last week marked the celebration of Pentecost. The Spirit descended on the gathered, frightened disciples and filled them with the fervor and vigor to go back out into the world. To go back into the midst of empire and declare something radical – that Love wins. Today we are reminded that we, yes, really, WE – you, you, me, all of us – flawed and human can meet others in their flaws and humanness. Isaiah was at first uncertain, unclear of how he might contribute and yet he was called. May we continue to liberate ourselves from our own fear so that we can liberate others. May we feel the relief of guilt so we can respond fully to our call. Amen.

[9] Marianne Williamson, A Return to Love: Reflections on the Prinicples of “A Course on Miracles,” (San Francisco, CA: HarperOne, 1989).