White Supremacy: Not in My Name, Not in My God’s Name 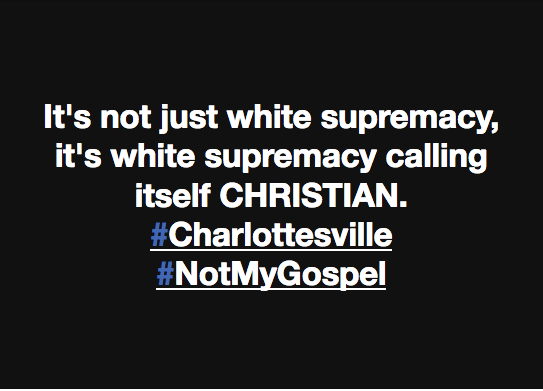 “They are coming for the church!
Police all around.
They won’t let us go outside.
Y’all these KKK are marching with torches!”

These are the words that our own beloved national Minister for Justice and Witness in the United Church of Christ, Rev. Dr. Traci Blackmon, posted on Facebook Friday night from inside a historically black church in Charlottesville, Virginia. She was inside a counter-protest worship service against the “unite the Right” march happening outside where white nationalists, white supremacists, and Neo-Nazis from across the country gathered this weekend, many armed, to rally their power. On Friday night, their chants included, “You will not replace us” and “Jews will not replace us.”[1] Those worshiping with Rev. Dr. Traci were encouraged to stay in the church or leave out the back doors in groups for fear of violence from the rally of mostly white men with torches, many armed, outside the church.

They had no idea then of the violence that would escalate on Saturday among the white supremacists – violence that, by the way, was NOT met with police presence anything like what Rev. Dr. Traci saw when she was in Ferguson. They had no idea that a car would accelerate into a crowd of counter-protestors, killing one – 32 year-old Heather Heyer – and injuring over 30 – an incident, by the way, still not being called domestic terrorism. They had no idea that the person charged with leadership of our country would call on them equally with those white supremacists to stop the “hate” and “unite,” as though fighting for your own survival against centuries of racism is the moral equivalent of being the Klu Klux Klan.

My friends, this horror is storming waters in our scripture story today. We have been told this bible story, many of us, as a story about Jesus’ power. But just like the text we studied last week about the multiplication of loaves and fish, making this story about Jesus alone cheapens it, insults to Jesus and insults all of us who seek to follow him. This story is a call to all of us, not just one man two-thousand years ago.

A little history lesson on large bodies of water and storms in the bible: They are not just a natural phenomenon, but a symbol of all that opposes God’s creative, life-sustaining, wholeness-making, justice-building work in the world. In the Hebrew bible, we see this over and over again from the story of creation over and against the chaos of the oceans, to the flood Noah faces in the global storm, to the exodus story with the Red Sea blocking the way of the people out of slavery until God moved it. These waters and storms tell a story of the ways of evil wrestling with God’s presence that demands justice and freedom and fierce love.

Today, these forces of evil look like the scenes in Charlottesville. This is the sea, with waves battering in a storm. And this is the scene onto which Jesus walks. But I was like Peter and the disciples in the boat far away watching. I watched from the comfort of my comfy couch, scrolling through news. I felt sick to my stomach, fear and anger and disgust and sadness all gurgling in my belly as I watched. Like the disciples, I too saw ghosts. I saw the ghosts of centuries of terrorism against people of our color and non-Christian peoples in our country. I saw the ghosts of slavery, of lynchings, of Jim Crow, of anti-Semitism, of Islamophobia, of violent policing, of jail cells, of all the ways white supremacy has found to live into today so we don’t see it clearly and come to normalize it. I saw the ghosts of what has happened in our own beloved state of Minnesota in the last few years, of cars that have rammed into protestors here and white supremacist shooters at Black Lives Matter rallies here.

These ghosts crowded out images of Jesus, of love incarnate. I felt haunted all day. I couldn’t see Jesus, I couldn’t see the holy in the midst of the horror. Jesus in our scripture story realized that his students, his disciples, couldn’t see him either and said to them, “Take heart, it is I.” What he said next is usually translated as “do not be afraid.” But when you look at the original Greek, he is actually saying something a little bit different. The full sentence is, “Take courage, it is I – not fear.” He is not chastising the fear of his followers. He is saying what you see is also me, love incarnate, not just the fearful waves of fury. Look harder.

They walked down the streets of Charlottesville together across so many lines of difference in robes, stoles, Jewish prayer shawls, hijab, prayer coverings – arm in arm. They prayed and they sang together as a scene of violent chaos erupted around them, like waves battering a boat in a storm. People yelled in their faces, openly carried guns, held signs of hate. And yet, they kept singing and praying and walking. They walked on top of the waters of hate, the waves of fury, the storm of fear. They are saying like Jesus, “come.” Get out of the boat of your safety, walk out here with me.

My friends, we are Peter and the disciples now. I am beyond proud to say we have been paying attention to these waters of hate – of white supremacy masquerading as Christianity – for some time now as a church together. We have studied the New Jim Crow, and Dear White Christians, and The Cross and the Lynching Tree. We have stood at too many vigils and protests with our Muslim and Jewish and POCI neighbors as have they have endured hatred. A majority of our congregation immersed ourselves in the national UCC curriculum on white privilege. We have stepped out of the boat.

But we have a long way to go to walk on water. Let me speak in “I statements.” I have a long way to go. White supremacy is like an onion, so many layers that are so painful to really look at. There is the most obvious version that carries torches, but the system benefits all of us white folks. Unless we are actively re-programming ourselves, retraining ourselves to see white supremacy in our day to day lives, working in our communities to dismantle the original sins of white supremacy of our country as they live on systemically and in us, we are getting back in the boat, letting the waves carry us away.

I’m not saying we have to be invincible or on every moment of every day, 24/7. Sabbath matters. And it’s OK to be like Peter and notice the strong winds too. It’s OK to get scared and overwhelmed, too. If we are paying attention, we will get scared. We, like Peter, will feel ourselves sinking into the waves of despair beneath the surface sometimes. And we might have different language for it, but we too will cry out for somebody to make it stop, to save us from the waking nightmare. Our scripture tells us Jesus “immediately reached out his hand and caught” Peter in his fear. And I am reminded of the 16th century mystic, Teresa of Avila, who taught us: