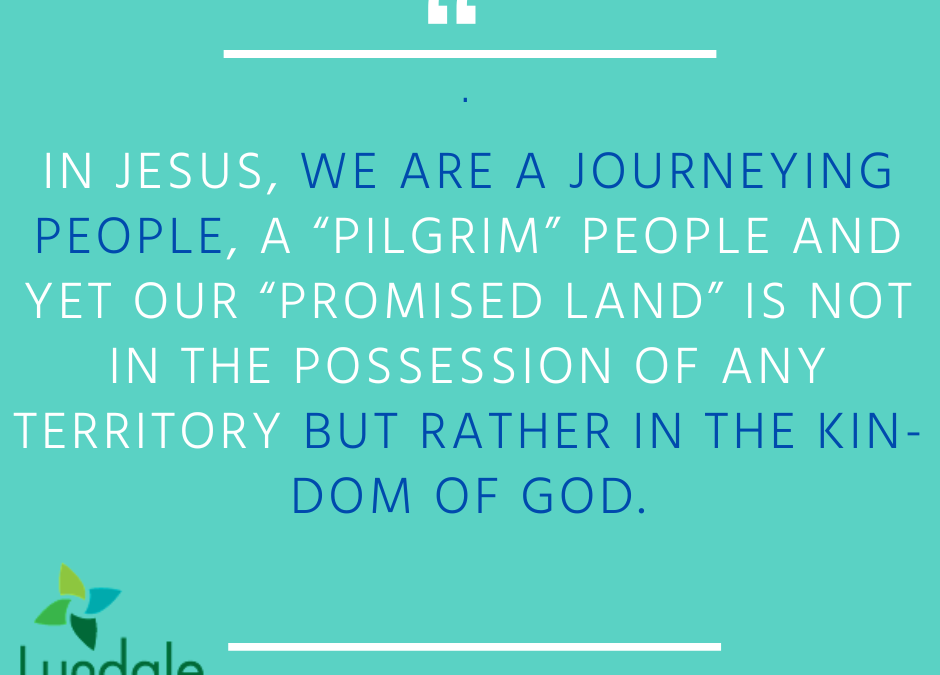 So goes the Norwegian table prayer which commenced every Thanksgiving and Christmas dinner in my grandparents’ rural Wisconsin home. By the time of my childhood, two generations had passed since my family spoke Norwegian conversationally at home, but still at least twice a year with aunts, uncles, and cousins squeezing into the small farmhouse kitchen, we twisted our now well-worn Anglo tongues into odd shapes to say the old words again. I grew up cherishing the tradition and still I hold it as something beautiful now, from a distance—since Grandma Simenson’s death in 2016, we no longer gather in this way. The prayer itself is a kind of mid-19th century time capsule of my family’s immigrant days.

Roughly between the years 1850 and 1910, it’s estimated that nearly 800,000 immigrants set off from Norway – by faith – to places in North America they had never previously been. In some cases, they did not know where they would find themselves at the end of their sojourns. For others, they knew exactly where they were headed, as they followed in the way of neighbors and kin who had already made the journey.

I was heartened when the day after the 2016 elections Ingebretsen’s on Lake Street spoke out, in a public Facebook post, to affirm the vital role of immigrants in shaping the United States’ ongoing history, over and against an openly xenophobic president-elect. “Ninety-five years ago our market was opened”, the post began, “to serve the specific culinary needs of the vibrant Scandinavian immigrant community that surrounded us, much like the bodegas and halal groceries that surround us today”. It continued:

Over the past 30 years, we have had the good fortune to see our community enriched beyond measure by the presence, dedication and big hearts of our Latinx and East African neighbors, and many other cultures. We are continually struck by how similar our relatives’ immigrant story is to many we hear today.

In 1958, then US senator John F. Kennedy, published the influential and bestselling book A Nation of Immigrants, a book that popularized an enduring phrase in our national discourse and also likely did its part to catapult that child born of immigrants into the presidency two years later. Much like that Ingebretsen’s Facebook post, the idea that “we are a nation of immigrants” celebrates the diversity of our collective origins and our common bonds. Yes, many of us in these United States of America are sojourners and descendants of sojourners. And yet, as historian Roxanne Dunbar-Ortiz lays out in her book Not “A Nation of Immigrants”, that idea often also obscures more complex and sobering realities in our country’s history that continue to shape our present and our future.

My ancestors were more than simply immigrants; they became colonial-settlers, conscripted by powers greater than themselves into helping to build and fortify the foundations of a country which from its outset Thomas Jefferson called the new “republic for empire”. By their mere presence amidst the forests and prairies of the Upper Midwest, they were enlisted in the policing and enforcement of massive land theft. Even before the Homestead Act of 1862, my Scandinavian kin were settling lands only recently “cleansed” of Indigenous peoples: Ho-Chunk, Kickapoo, Meskwaki, and Potawotami, among others. Maybe my Norwegian forebears were chasing an “american dream” (a concept that actually wouldn’t come into popular usage until well past their migrations) but just as likely they were desperate to leave behind the crushing poverty and dwindling prospects in their homeland— many at the time were day laborers, landless tenant farmers, and sharecroppers. And yet in the US, not only was there a promise of better farmland, but it was also land that could be their own. Land of their own—that alone was promising enough to call them forward into unknown places.

In June of 2013, delegates of the UCC’s General Synod 29 voted overwhelmingly for a “Resolution of Witness to repudiate the Doctrine of Discovery”. Even if we may not recognize it by its name, the “doctrine of discovery” is an all too familiar idea to many—the telling of history in which Christopher Columbus “discovered” America, a land that until his arrival was all but “wilderness”. By their supposed right of “discovery”, european christians justified themselves in the conquest and conversion of other lands. According to the logic of empire, anywhere they “discovered” was “promised land”.

In the Hebrew scriptures, the promise of land appears as early as the stories of Sarah and Abraham. The book of Genesis tells of how God first called them to venture out to places unknown. God’s covenant with them included the promise of descendants as numerous as the stars in the sky and as countless as grains of sand on the seashore. Faith plays an important role in the telling of their story—indeed, it is a faith which the New Testament’s Letter to the Hebrews puts at the center of the story, for those who came before them and those after.

The themes of journey and pilgrimage appear again and again in the bible and particularly in the Letter to the Hebrews. We are a journeying people, the scriptures attest. In this way, the bible can become a valuable guide for us in our own transitions through life. Indeed, beloved Lyndalians, you too are on a pilgrimage even now, as you continue to journey through grieving Pastor Ashley, preparing to welcome a new interim minister this September, and seeking to re-“discover”, as it were, who God is calling you to be now. Biblical scholar Jesper Svartvik, commenting on the Letter to the Hebrews, suggests that “Christians who look upon themselves as pilgrims are reminded that they have not yet reached their destination, that they are still on their way, and that they do not have all the answers.” Dear Lyndale, you are a pilgrim people.

And yet in employing this biblical term, in thinking of ourselves in this way, I think that Professor Svartvik would also want to make clear the need to carefully disentangle the biblical themes of pilgrimage from our own contextual baggage. It is the so-called “Pilgrims” after all who in landing at what would come to be called Plymouth, Massachusetts, would regard their “discovery” of those lands as God-given, a new kind of “promised land”, and thus follow the well-trod path towards attempted genocide, land theft, and a “relentless assault” on the sovereignty of Native nations. I believe that our way forward as christians involves embracing these UCC forebears and others with compassion even as we take strong action to repent and repair their wrongs. The God of the Hebrews calls us now to the work of decolonizing our theologies—a journey of faith in itself, and a process of transformation by which greater understanding and trust might lead us ever further into greater justice and God’s kin-dom come.

“We have been trained to read the Scriptures, especially the Old Testament, incorrectly,” Mark Charles writes in the book Unsettling Truths: The Ongoing, Dehumanizing Legacy of the Doctrine of Discovery. “We have been taught to put ourselves in the place of Abraham, Isaac, and Jacob. We read the Old Testament as if the United States is the chosen people of Israel”. But Mark Charles’ point is that we are not. Indeed, as Dr. Willie James Jennings points out, the story of the Hebrews writ large is not our own story to begin with. At least for Gentile Christians, for those of us who do not share blood ties with the Jewish people, our own ancestor stories are far more varied and our own “old testaments” multiple. Thus, Professor George “Tink” Tinker in his book American Indian Liberation commends to every christian the important task of identifying the other “old testaments” in our family lineages.

As just one example, for my own people of Scandinavian origins, the Old Norse sagas offer another sojourner the likes of Sarah and Abraham. Of both Norwegian and Irish heritage, Gudrid was born around the year 985 on the Snæfellsnes Peninsula on the western coast of Iceland. The stories told of her in The Saga of Erik the Red and The Saga of the Greenlanders vary, but they both concur that she travelled far and wide, from Iceland to Greenland and then to what the Norse called “Vinland”, all but surely the site of L’Anse aux Meadows on the northern tip of the island of Newfoundland off the mainland of North America. Later, she would sojourn from Iceland to Norway and Denmark, and then to Rome and back on pilgrimage. In one story, in Greenland, when a famed Norse mystic and priestess named Thorbjorg asks for help in summoning the spirits, young Gudrid sets aside christian taboos to chant the sacred incantations taught her by her foster-mother in Iceland. After Gudrid’s song, the staff-carrying priestess Thorbjorg turns to her with words of blessing that could have well come out of the book of Genesis and the promises made to Sarah and Abraham, telling her, “You will make the most honorable of matches. From you will be descended a long and worthy line. Over all the branches of your family a bright ray will shine”. In another story, in one of the earliest recorded encounters between european and those indigenous to the Americas, the sagas recount how Gudrid met a young woman, likely from the Beothuk tribe, with a generous spirit of friendship and hospitality. Indeed, the sagas describe Gudrid the Far Traveler as one “who knew how to behave around strangers”.

In Gudrid, I find a model of faith, a spiritual and blood forebear, one who straddles multiple spiritualities and by her hybridity transforms them. Through Gudrid’s story, one story among many in a “great cloud of witnesses’ (Hebrews 12:1), we can meet Jesus again, in a new-old way—for Gudrid shows us the Jesus who journeys with us. Gudrid the Far Traveler bears witness to the Jesus who teaches us the power of hospitality toward friends and strangers alike, and who empowers us to be good guests upon the Earth, wherever we find ourselves.

Gudrid manifests the Jesus who calls us toward a kin-dom in which any sense of “sovereignty” is based in relationship and belonging. In Jesus, we are a journeying people, a “pilgrim” people and yet our “promised land” is not in the possession of any territory but rather in the kin-dom of God. According to such ties of kinship, Spirit’s work empowers us to repair the injustices of our histories and nurture communities in which all can find themselves a home.