Transfiguration and the wisdom of grief 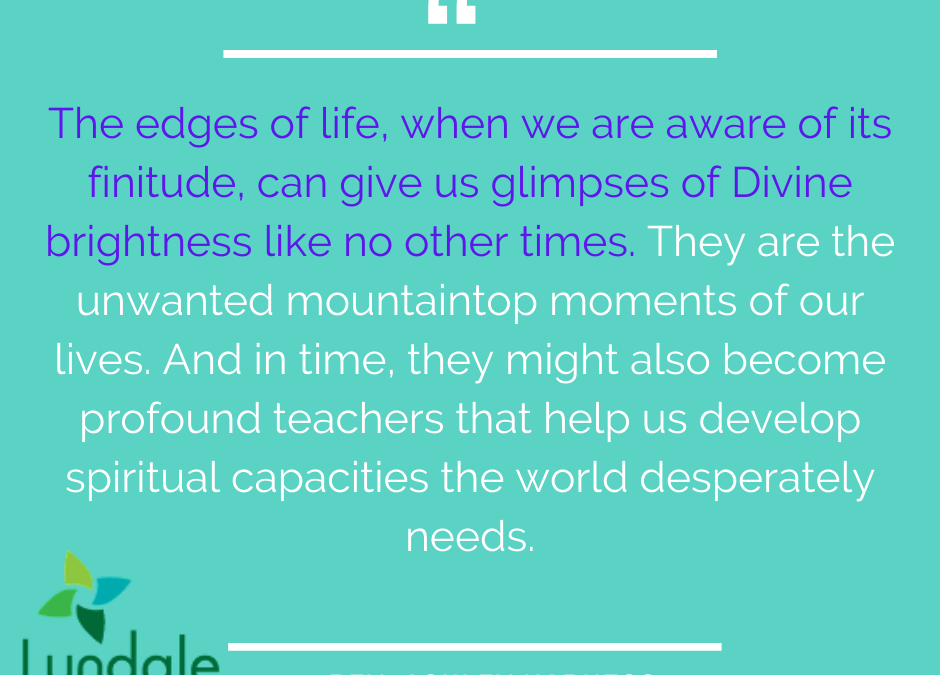 It was on of my first nights on call at the hospital as a chaplain-in-residence in Brooklyn, NY. I got call to a department I’d never been to and had to look up on a map. It was a day surgery unit. Her husband had had what was supposed to be a relatively routine heart procedure. And then the messiness of bodies and humanity prevailed and it didn’t go how it was supposed to. I arrived to find two women, one younger and flying high in a rage. One older, tucked into her coat still despite hours inside, purse on her lap, a new and shocked widow. Once her daughter had released the rage of grief, the widow finally found her voice. Quietly, she chuckled to herself, “I’m even going to miss him complaining about how I made his tuna fish sandwiches.” His life was transfigured, even his crankiness shining like the sun, in her memory now.

He was there every day in the ICU for weeks and weeks standing next to his wife’s bed. Patients weren’t usually in the ICU for weeks and weeks. And if they were, it was rare to see the same family member there in vigil day after day, hour after hour, standing. He wasn’t young. But he refused a chair. He wanted to be able to see her face, to brush her long hair, hold her manicured hands. From my perspective informed by her nurses, she was just barely lingering on this side of eternity. Tubes in all kinds of places kept her alive. But he didn’t care. He saw her in their youth, dancing with him, he told me. He saw her as a mother of their young children, playing. Her hospital gown may as well have been an evening gown, in his eyes. She was his gorgeous everything. Her whole being was transfigured, dazzling, to him.

She was in her twenties. She wanted to marry her fiancé. She wanted to drive back to Mexico, her home, from New York. The medical team was losing their minds. They were convinced she didn’t understand how sick she was, that she might not make it alive through such a long drive. I was supposed to talk to her about it as a chaplain. Clearly, I was the hail Mary attempt. As I sat with her, it was obvious that stage 4 stomach cancer had done nothing to impair her judgment. If anything, she was more clear-hearted and clear-minded than anyone else around her. She knew she was dying. And quickly. She just wanted to live while she was alive. The next day, against medical advice, she left to go live every last minute she had. Her life itself, with so little time left, was transfigured into something shining bright and not to be missed, stuck in a hospital bed far from home.

Today is transfiguration Sunday. It’s the day we tell the story of Jesus being transfigured on the mountaintop. Transfiguration is a weird word we don’t really use today. One translation I found says that being transfigured meant Jesus was revealed as “resplendent with a divine brightness.” I love that image. It makes me want to wear sequins or glitter so I can be resplendent too, shining with the sparkle of God.

But in all seriousness, the transfiguration is perhaps best understood as a story about the unique wisdom of grief to help us see the Divine through the ordinary around us. The writer of this Gospel was probably writing about 50 years after Jesus died, a part of a community trying earnestly and desperately to make sense of their encounters with a spiritual teacher and prophet like no other they had had. There was the grief over his traumatic execution by the state. And also, there was the grief in the wake the destruction of their temple, their holy home, and the war with Rome and chaos that had erupted among different factions of their religious community. In the haze of all that pain, Matthew remembers Jesus and grieves.

And just like the rest of us remembering and steeped in grief and trying to make meaning of what is happening around us, what do we remember when we need comfort? We remember the moments of each other’s resplendence with divine brightness. We remember with fondness even the complaints about that tuna fish sandwich. We see not just the horrors of a body in medical crisis littered with hospital tubes, but the divine life that lived inside that body for decades of dancing and play and family-making. In grief, sometimes even life itself is transfigured so we want to live every scarce and dazzling minute of something as mundane as a long road trip.

I don’t mean to romanticize grief, here. Some forms and moments of grief are so intensely painful we can barely breathe, let alone experience the Divine – sometimes for long periods of time. And also, I want to honor grief’s gifts. The edges of life, when we are aware of its finitude, can give us glimpses of Divine brightness like no other times. They are the unwanted mountaintop moments of our lives. And in time, they might also become profound teachers that help us develop spiritual capacities the world desperately needs.

“Our calling is … to develop a capacity to see beyond common sense and ordinary sight. To see the world’s suffering unflinchingly, exactly as it is, and to see God already working right there a someday resurrection,” says Rev. Mary Luti. “And this means we must learn to pray and to pray contemplatively, to re-calibrate the eyes of the heart by gazing on God.”

The edges of life have a habit re-calibrating the eyes of our hearts, teaching us to see God’s resplendence through the suffering of life. May we have the courage to live that gift not just at the extraordinary edges, but in the daily centers of our lives. May we practice noticing glory, noticing resurrection brewing, noticing sparkling transfiguration every day. And if we need some help, may we draw on our own memories of the saints of our lives, those who live on the other side of eternity but whose memory helps us see with our hearts, to see the holy.

Who is it for you? Whose crankiness in life makes your smile in missing now? Whose singing or dancing or laughing echoes in your heart now, years later? Whose smell lingers on clothes in your basement, reminding you of a home you haven’t been to lately? May they transfigure your vision of your life today.

And by the way, hospital rumor had a week later that she made it to Mexico.