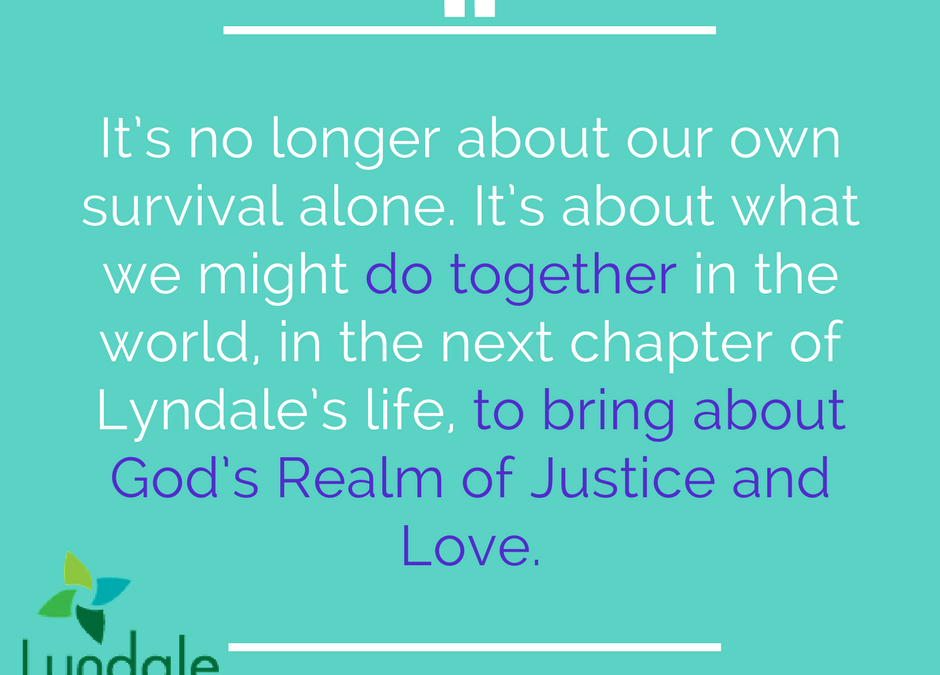 In the last week before Pastor Don retired after 34 years with us at Lyndale, he took me on a tour of the old Lyndale building on Aldrich. He said it was important for me to see it with him. I didn’t totally understand. Since a different church community has taken over the building, there is a grand new entryway with a beautiful reception area. The worship space has been transformed so there are movie theater style seats. All of this was slightly bizarre to me given how I imagine Lyndale must have done things differently, but not super IMPORTANT.

Then we left the part of the building that had been remodeled and began to meander through all the corners and crevices. Don’s pride and joy was the boiler room where he said he spent many, many hours learning how it all worked so he could fix small things that went wrong frequently. He took me to the gym, that had fallen a part. He took me way upstairs where the rooms were plentiful, but many in disrepair. And I began to get it. Lyndale had been held captive by this building. I knew the story – that this building had needed repairs outside of our league of fundraising. But I didn’t get what it felt like to be stuck there. I turned to Don as we walked out and said, “Thank you. I feel like I should bow down at your feet.”

The story of how Lyndale, how you all, got unstuck from that building on Aldrich, wandered through the wilderness of Uptown not knowing what was coming next, and eventually wound up here at SpringHouse with two other churches from two different denominations is a story that goes down in our history together and in the national United Church of Christ as a story of so much faithfulness. I get calls from colleagues across the country in small churches who want to know how we did it. They are usually communities that have become so stuck in their old buildings that are falling apart around them that they don’t know who they are outside of being a church building. Their buildings have become their whole identity.

I’m sure there were times in the wilderness of transition that this community complained to Don like the community of Israelites complained to Moses and Aaron, not about starving literally but about the hunger for home. But you found a way to be united in the insecurity and struggle of being in the wilderness together instead of divided by it. You leaned into God, into each other, trusting that God would not ignore the struggle as the earthly leaders like Pharaoh did, but would respond to co-create with you what was needed just like in the Exodus story. You have co-created with God what was needed over and over again in the past decade.

As I was reading commentaries this week on this scripture from Exodus, I was struck by this analysis from Dr. Anathea Portier-Young, a professor at Duke Divinity School: “The congregation will be shaped by the mundane, day-to-day work by which they respond to the divine gift that supplies their lack (16:4). They will be created and re-created in routines of contingency, dependence, trust, and generosity. They are promised that by observing this routine they will come to know God as the one who freed them … and sustained them each day in the wilderness (16:6, 7, 12).”[1]

When I read that paragraph, I don’t see the ancient congregation of Israel of our scripture, but this congregation of Lyndale. The work of getting out of that building that was holding us captive, of co-creating the new reality of SpringHouse, of transitioning our pastoral leadership from a pastorate of 34 years to a new pastoral team, was not a giant leap of faith but a series of faithfully mundane, day-to-day tasks in response to God at work in our lives. It was the work of letting ourselves be re-created together in routines of “dependence, trust and generosity” that lead us from meeting to meeting, from Sunday to Sunday, from spreadsheet to spreadsheet, from budget to budget, from prayer to prayer, from conversation to conversation, and eventually from one reality to another. And in that seemingly mundane routine and practice, we came to know the God of freedom and sustenance better.

But this is the thing. When we get to the end of our story today, the congregation of Israel is far from the Promised Land. They have figured out some things about how to live in the wilderness, but the story is a LONG way from finished. In fact, at least 40 years from finished. In the midst of the wilderness, though, something I notice in the story is a back and forth for the congregation between two ways of experiencing themselves. At times, like in the beginning of our scripture passage for today, they are a community that understands themselves as bound together by what Professor Portier-Young names as “insecurity, anxiety and hunger.” And at other times, they are a community that is able to see themselves as bound together with each other and God to co-create enoughness and abundance through their mutual dependency, trust and generosity. As we see in our political landscape, it’s a lot easier to be bound together in fear than it is to be bound together in interdependent, generous freedom.

That’s our new call together too, to be bound together in our growth, in our interdependence, in our freedom, as we make our own way out of the wilderness of transition from building to building and pastor to pastor. Now is a new beginning of sorts, for us.

This week was also the Jewish New Year. My friend Carin, who is the Executive Director of the Jewish Community Action here in the Twin Cities, wrote this beautiful interpretation of what the holiday means to her that resonated with me:

“This year has been hard in a lot of ways, and I’m pretty happy to start a new one, but I’m always a little sad to start the Torah [the Jewish scripture story] over, because I really love the end. At the end of the Torah, having escaped slavery and having wandered in the desert for 40 years, the Israelites prepare to go into the Promised Land. And here is where Moses dies – he will not go with them. He doesn’t get to finish the trip. It’s not his destiny, it’s not about him. This is a powerful reminder that the path to liberation is not about glory, it’s not about winning something. It’s about working for something much bigger than us, whether you call it God or love or justice. It’s a reminder that whether we’re entering the Promised Land or just another new year, to do it with humility.

And there, leaderless and together in community, as we stand looking on the world we are about to enter – we begin again.”

While we aren’t leaderless, we have transitioned leadership. This is the first full year of my “settled” or non-temporary leadership at Lyndale. In many of our church Council meetings and on our Dream Team that helps dream our future, it has felt something like what Carin describes. We are putting on our grown up pants collectively without the institutional memory of a long-time leader. We are looking out on the world we are about to enter that is our collective future. And we are trying to make sense of it all. It’s no longer about our own survival alone. It’s about what we might do together in the world, in the next chapter of Lyndale’s life to bring about God’s realm of justice and love and liberation some call the Promised Land.

And it was in looking out at that view that the Dream Team (with Council’s instruction and approval) crafted the clarified version of our mission statement that you see printed on your bulletin cover – the bottom of the two versions. We spent time playing with playdough, getting out of our heads, envisioning what we love about Lyndale and then we went back to the words of the original mission statement and tried to connect the dots. In the end, there wasn’t much work of connecting to do. There was just some clarifying of language. We – a group of about 8 Lyndale members from all different generations of Lyndale life and different corners of our various community represented – were all deeply drawn to various aspects of the Micah 6:8 text to describe our mission: What does your God require of you? To do justice, love mercy and walk humbly with your God. Just like the previous mission statement, the mission statement you see in front of you reflects that scripture, just a little more closely this time:

“Deepening our curiosity and faith,” is Lyndale’s way of expressing what it means to us to walk humbly with God.

“Embodying God’s healing and love,” is Lyndale’s way of expressing what it means to love mercy.

“Building a more just world here and now,” is Lyndale’s way of expressing the commandment to do justice.

Lastly, as you may have noticed in the first mission statement at the top of your bulletin, there’s no subject in the sentence. There’s no “we.” After reading various church nerd books about crafting mission statements and the importance of a “we,” we landed on the line, “We are a growing community.” You may not have realized it, but 20 people have joined Lyndale as members in the last two years and there are another 15 or so who are participating with us in various ways. That means we’ve increased in size by somewhere between 25% and 33%, depending on how you do the math. We’ve also increased in Sunday morning attendance from about 25-35 on average when I started to about 45-55 on average now. We are growing! We are not growing out of our mission, out of what we love about this community, but growing into it more deeply.

It’s a beautiful thing. It’s also challenging. There’s an old saying among pastors that ministry is like putting nylons on an octopus. That’s because there is so much happening at once in all different directions. And what council has realized is that we need a little bit of help getting the nylons to stay on. It’s not so much that we’ve grown new legs, as they’ve gotten bigger and our old nylons don’t entirely fit. The forum after church today about our governance review process and provisional mission statement is really about just that, getting some nylons that fit who we are now so we can keep on being our best selves and not get pinched or stuck.

And more seriously, it’s about moving from a wilderness place to embracing a new beginning together. As my friend Carin reminds us of the new beginning our Jewish friends celebrate this week, “the path to liberation is not about glory, it’s not about winning something. It’s about working for something much bigger than us, whether you call it God or love or justice. It’s a reminder that whether we’re entering the Promised Land or just another new year, to do it with humility. And there… together in community, as we stand looking on the world we are about to enter – we begin again.”