The Resistance Will Be Salty 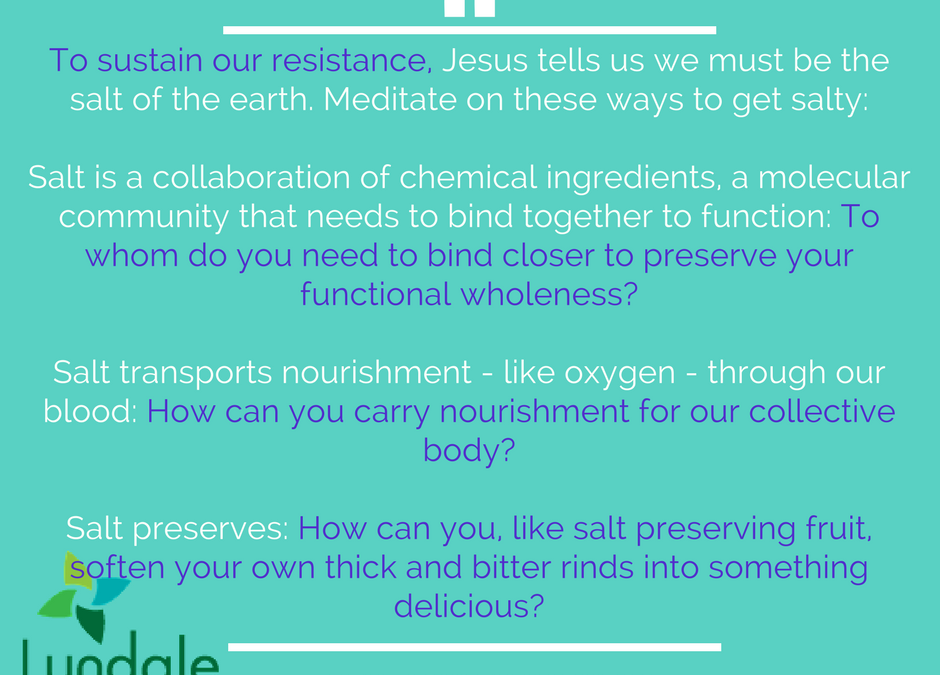 Good morning beloveds. I don’t know about you, but these last two weeks or so since the inauguration have been pretty devastating and exhausting for me. We knew it would be bad. Many of us knew our own humanity or the humanity of those we love would be questioned and tested. But the pace of this mess has been unexpected and unrelenting.

I feel like I wake up each morning to find a waking nightmare awaiting me in the news, and then several times each day something else that grates against my soul appears in my newsfeed. Sometimes I frankly just want to hide under the proverbial blankets of my privilege. I have just enough of it economically, as a white person, as a Christian and as a citizen that I can temporarily hide. But that’s not really what I want either. And that’s not what God calls us to in this world. And yet, I’ve been struggling to find a sustainable way of living while awake. How about you?

That’s because this emperor of our times and his administration are emotionally flooding us. Emotional flooding happens when we feel a combination of overwhelming fear, anger or sadness AND simultaneously experience a feeling or a reality of powerlessness. It’s related to the physiological phenomenon called “fight or flight,” that evolved to save us from immediate physical threat. Our pulse increases, our breathing becomes shallow, our stomachs clench, our jaws can tighten and even our voices can change. Not surprisingly, flooding also limits our capacity to think clearly or creatively, our ability to feel empathy and our potential to respond thoughtfully instead of just react instinctively to the experience at hand.[1]

In abusive relationships and abusive systems of power, emotional flooding is a tactic, a way of maintaining power and control. That means that in these times, making space to un-flood, to dry up the adrenaline so to speak, is actually an act of holy resistance. I came across this poem-prayer from one of my favorite poets, Mary Oliver, this week and some voice deep within me said “yesssssss” as I breathed out, slowly and deeply into my belly:

Sometimes I grow weary of the days, with all their fits and starts.
I want to climb some old gray mountains, slowly, taking
The rest of my lifetime to do it, resting often, sleeping
Under the pines or, above them, on the unclothed rocks.
I want to see how many stars are still in the sky
That we have smothered for years now, a century at least.
I want to look back at everything, forgiving it all,
And peaceful, knowing the last thing there is to know.
All that urgency! Not what the earth is about!
How silent the trees, their poetry being of themselves only.
I want to take slow steps, and think appropriate thoughts.
In ten thousand years, maybe, a piece of the mountain will fall.

Can you feel your shoulders relax when you hear those words? “All that urgency! Not what the earth is about!… In ten thousand years, maybe, a piece of the mountain will fall.”

I think there’s a reason that our scripture this morning comes from a passage where Jesus has retreated with his disciples and followers to a mountaintop. The physical and spiritual view is different there, bigger there. Urgency recedes. Our breathing can slow, our stomachs can relax, the pulse can return to resting rate.

With the wide-angle, mountaintop view in place, Jesus began his public ministry and kicked off with an inaugural speech that flew in the face of the Roman empire of his times. He spoke those famous and infamous sayings that flipped the world on its head by calling the meek, the poor, the peace-makers blessed instead of those seemingly blessed by the world’s rewards of riches and esteem. Perhaps if he had been preaching this week, Jesus would have called the immigrants and refugees blessed; the Muslims blessed; the earth and water threatened by pipelines blessed; the indigenous lands and people under attack blessed; those facing threats to their health insurance blessed; the Jews who were left out of the White House speech on Holocaust Day of Remembrance blessed; Black Americans insulted by the ignorance of a leader who couldn’t string a coherent sentence together about Black History month blessed; those rising up in solidarity and new courage blessed. You get the idea.

Right at end of this litany of those who are blessed in the Gospel of Matthew comes our scripture for today. This is critical context. Because what Jesus is saying is that those who act in the world as though these people, these communities and these lands abused by the powerful are blessed – we are the salt of the earth.

Now, what does that mean? I mean, I get salt cravings and love me some chips, but that’s not what we’re talking about here. Salt was one of the earliest preservatives and used as such in ancient times. In the Hebrew bible, salt is a sign of the eternal preservation of God’s relationship and commitment to God’s people.[2] In Jesus’ time, salt was far more rare than it is today and a precious commodity. Not only does it taste good, but salt is necessary for human survival. While Jesus wouldn’t have known the specifics, we know now that, “Without sodium, which the body cannot manufacture, the body would be unable to transport nutrients or oxygen, transmit nerve impulses, or move muscles, including the heart.”[3]

And yet, this resource so critical to human survival and so deeply symbolic to Jews like Jesus of God’s commitment to them was also being used and abused by the Roman Empire. The Romans taxed salt to pay for their wars, even sometimes to pay their soldiers.[4] This is some serious history geekery, I realize. But I think the symbolism is so powerful.

“You are the salt of the earth,” says Jesus. Jesus is again, just like in those powerful sayings of blessing, flipping the script. In calling us salt, Jesus is calling his ancient followers and us today to be the key ingredient of preservation of God’s relationship with humanity. Jesus is calling us the nourishment and life-giving force as critical as oxygen to the body. In doing so, Jesus is putting salt to an entirely different use than the Roman Empire using it to finance war.

I love the poetics and symbolism and story here. Jesus is giving us such a different way of thinking about resistance to empire than most of us are used to. You see, in the background of this text is some ancient infighting within the Jewish community about how to live under the occupying force of the Roman Empire. We progressives no nothing about that, right?!

The first group – the Sadduces – are said to have been interested in collaborating with the occupying forces, working through the inner channels. The next, the Zealots took up arms as the “by any means necessary” camp. And the last, the Pharisees, were divided, and yet many of them were known to have pulled inside, focused predominantly on studying Torah – Jewish law – and maintaining cultural wholeness as the war raged on around them.[5] Jesus critiqued ALL these sects throughout his ministry for various reasons, but interestingly he takes a moment to compliment one of them in this text. While calling us to be salt of the earth, he draws special attention to the Pharisees known for their deep scholarship and study and preservation of community.

I think this is the secret of resistance we need for our times in order to stay awake without losing our minds. We have some strategies, but we don’t have all the political solutions to our collective struggle in these times yet. And we are going to go crazy thinking that if we just send one more email, make one more phone call, read one more news article, go to one more protest or find exactly the right policy solution that we are somehow going to wrap our brains around this political moment and know exactly what to do.

This is not to say we shouldn’t take action. But we need to shift our thinking and our heart’s approach. We need to imagine ourselves like salt. Salt, after all, is not a single molecule, but a collaboration of chemical ingredients in and of itself. It’s a molecular community that needs to bind together to preserve itself, which is perhaps why Jesus points to the Pharisees as an example of a community that tends deeply to community cohesion and wholeness.

These times beg us to ask ourselves how we can be like salt. So before I end, I’m asking you to just pause. Put your both feet on the floor. Breathe. Make a mountaintop space in your mind and ask yourself, to whom do you need to bind closer to stay preserved in your wholeness for the long haul? How can you be nourishment for our collective body? How can you transport your ONE piece that is life-giving – like oxygen through our collective blood? How can you strengthen your heart muscle or transmit a signal to our nerve endings? Or if the body metaphor doesn’t work for you, go ahead and go with food. How can you act in ways that draw out the most fabulous flavor in you and of those around you? How can you, like salt preserving fruit, soften the thick and bitter rinds of those around you into something delicious?

This is our work and our delight right now. This is God’s saltiness in us.