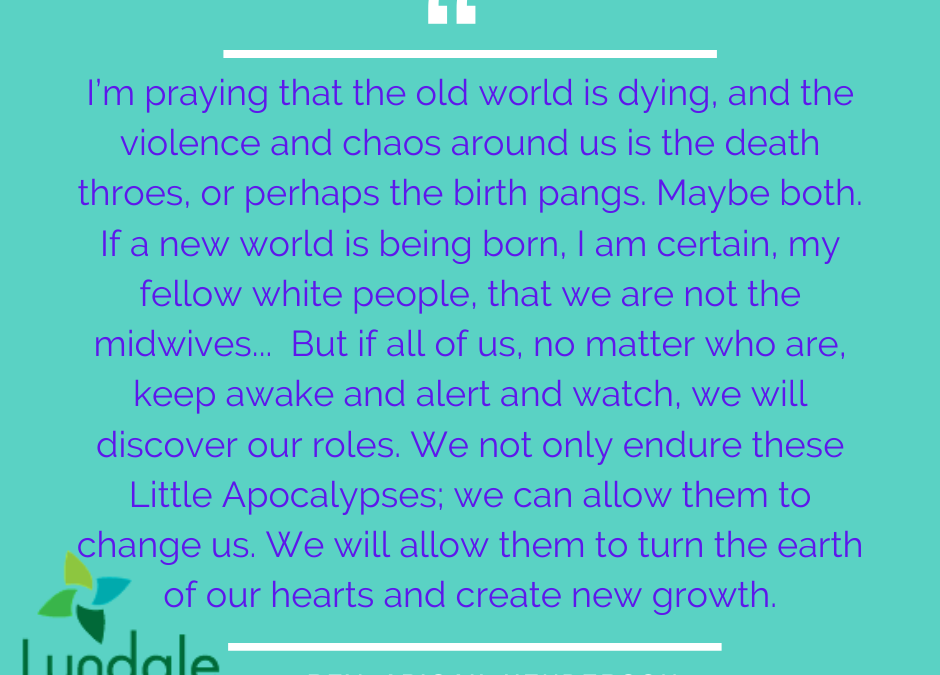 I want to begin by sharing some words with you from my friend and colleague, the Reverend Jane McBride. She serves a church right by 35W, right near where the truck plowed into protesters last week.

Speaking of the state of emergency with racism and policing and the chaos in our city, she wrote,

This is a war for our souls, a war that rages all around us, and also within each of us. The police, fire department, and national guard do not have the capacity to make our community safe and whole. The territory is enormous and they cannot be everywhere. But that’s not the real problem. Even if we had thousands more troops, their ability to support the flourishing of our community is deeply compromised by white supremacy… What I mean by white supremacy is a system of white dominance that is the very air we breathe. I am not pointing fingers here. I, too, am entangled in that system. I am privileged by it. My judgement is compromised by it. I am as responsible as any other white person for the suffocating knee on the neck of my black and brown neighbors. I know that it is my life’s work, to fight this evil, and that the first battleground is within myself.

I felt moved by Jane’s words, and I recognized myself in them. I feel that war in my mind and in my heart.

Perhaps some of you feel like this too. Maybe you, like me, are feeling broken open by this time in our nation’s history, acquainted more than ever with your brokenness, with our collective brokenness, wondering what to do with all these shards, wondering how to hold onto a hope that isn’t cheap but grounded in reality.

It’s moments like these when I’m grateful to be part of a faith tradition, to be reminded that while the circumstances of this moment are completely unique to our culture and place, many of the feelings we may be having are not. Our sacred text knows about these feelings we’re having, because its stories were told by fellow humans. No matter our path through the human experience, there is truth and wisdom in the Bible that can speak to us.

This past week, as my spouse and I hunkered down in my home off of Lake Street in South Minneapolis, I’ve been reminded of today’s reading, Mark 13, which scholars have given the nickname “The Little Apocalypse,” because it contains themes and imagery similar to the Book of Revelation, which you might call “The Big Apocalypse.”

What do you think of when you hear that word, apocalypse? Popular culture supplies us with some imagery. Books, movies, television, video games: they all offer a buffet of imagery. Pick your poison: nuclear war; ecological collapse; alien invasion; meteorological impact; pandemic – that one hits way too close to home right now.

It’s all the stuff of nightmares. The things we’re most afraid of, as a people. Our collective anxieties.

To understand any piece of apocalyptic literature or art, you have to understand the fears of the age that produced it. So what worried the early followers of Jesus? What kept them up at night? What fears were embedded in their stories of the end of the world?

This is what we know: Jesus and his early followers were Jews living with a legacy of social upheaval and displacement. For centuries before the common era, the people of Israel were at war with and exiled by more powerful nations.  By the first century, they were living under Roman military occupation.

In such a world, power was abused, leaders were corrupt, and resources were hoarded. The rich only got richer, while the poor only got poorer. No one was truly a winner in this kind of world, but the already-vulnerable – the people living nearest to the edges – were always the ones who suffered the most.

Jesus, as we know, was drawn like a magnet to the already-vulnerable. The widows and the orphans, the little children, the social outcasts and the sinners, the poor and the sick. Those were his people, his beloved.

And I think Jesus had an amazing insight about these people, which was this: if the world promises you nothing but suffering, then maybe the end of that world doesn’t sound like such a bad thing. In fact, perhaps that is exactly what you’ve been dreaming about: the destruction of this world and its present arrangements – which offer no hope – and the birth of a new world with different arrangements and the possibility of hope.

In other words, a new world not governed by human law but – in its stead – governed in accordance with the justice and mercy of God.

In Jesus’ story, power isn’t man-made, won through military power or wealth. In Jesus’ story, real power flows only from God. And God’s power is designed not to oppress the lowly, but to lift them up.

Now, imagine that you are a first century follower of Jesus. Your life has been extremely difficult; you have tasted death on a daily basis. You yearn for this new world that Jesus promises, that his followers promise. You are poised and ready for the transformation, eager for God to finally wipe your tears away.

But then it doesn’t happen.

For the early Christ-followers, the continuance of the old world order was anticlimactic, to put it mildly.

But here’s the twist: Jesus didn’t leave them hanging. He had words for them:

Truly I tell you, this generation will not pass away until all these things have taken place. Heaven and earth will pass away, but my words will not pass away. Beware, keep alert;  for you do not know when the time will come.

These words have echoed down through generations, from the first century to the twenty-first.

I think they function as both a reassurance and a warning – maybe both – depending on who you are.

I suspect that many of us – especially those of us who are white and educated, with safety nets strung beneath us – we’ve been lulled into complacency and a false sense of security. I don’t know about you, but as much as I talk about wanting the world to change, there’s a lot about the current world that suits more than I’d like to admit.

But here’s the Good News: I think the week following George Floyd’s death was a Little Apocalypse for me. And I don’t say “little”  in the sense that anything that happened was minimal. I say Little in the sense of foreshadowing something much bigger.

A summary of what that week was like for me.

I have felt on edge as helicopters, sirens, strange booms, and alarming sounds (was that a gun shot?) are the ambient noise.

I felt demoralized by the sight of familiar businesses destroyed, many owned by people of color and crucial to our community infrastructure.

I have felt terrorized by big trucks speeding or driving very slowly and groups of young white men, some armed, roaming our streets, and by news of incendiary devices hidden on the property of homes and businesses in our neighborhood.

I have felt exhausted, my own history of trauma activated and exacerbated by the experience of always being on alert; cortisol coursing through my body, and my adrenal system never really relaxing. My block is organized and looking out for each other, which is amazing, but strange: I’ve never had the experience of protecting my neighborhood because no one else will.

I have felt sick to my stomach realizing that, although I looked at the police with skepticism and criticized them as an institution, I still – in my heart of hearts – counted on them on some level; I believed they would still “show up” for me in times of public emergency. That selfish trust – which allowed me to prioritize my own security over my neighbors’ lives – has finally been shattered by the MPD. The MPD, which appears far more interested in brutally punishing protesters, arresting and assaulting journalists, and, from the mouthpiece of their union leader – glorifying killing like a professional accomplishment – than protecting all the people who live in this city.

I haven’t seen a uniformed police officer in days and days, but if I did, I’d be scared. I wouldn’t think, “Oh good, help is here.” My first instinct would be to back up.

And I have felt all these things knowing – knowing that I was actually relatively safe, all things considered, because I am a white, upper-middle-class, property-owning educated woman.

I am telling you all this because these experiences have been educational and humbling. Running beneath all of these feelings is a deeper dawning, as knowledge moves from brain to gut, from intellectual to visceral. I’m realizing that my feelings of the past week are a small, small taste of how many black and brown communities and people feel all the time.

What does that do to a body? A family? A community? A people? Why do I tolerate that kind of suffering in the Body of Christ?

As always seems to be the case, actually understanding a little bit more makes me realize how much I still don’t know. So now it’s time for me to listen, and pay attention to black voices and black leadership; how would anyone else know where to lead us now?

I’m praying that the old world is dying, and the violence and chaos around us is the death throes, or perhaps the birth pangs. Maybe both. If a new world is being born, I am certain, my fellow white people, that we are not the midwives.

But if all of us, no matter who are, keep awake and alert and watch, we will discover our roles. We not only endure these Little Apocalypses; we can allow them to change us. We will allow them to turn the earth of our hearts and create new growth.