The Book of Kayla 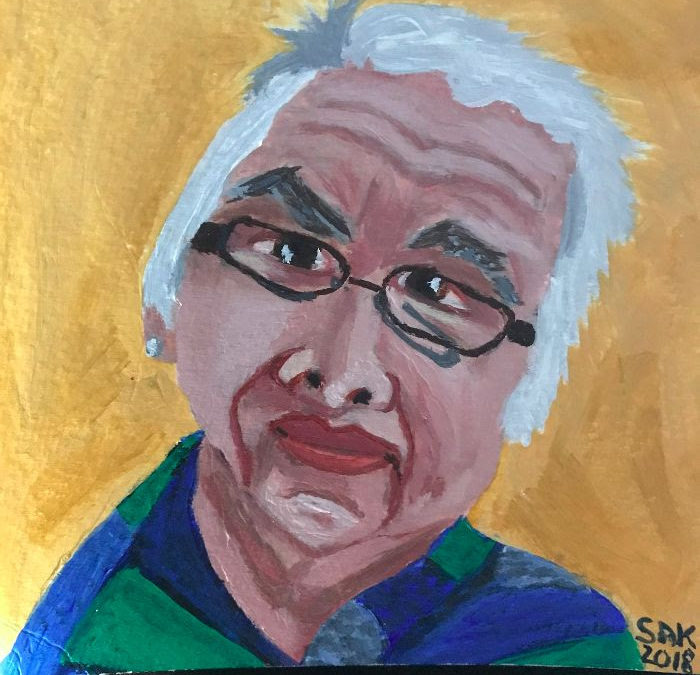 “Say something you know to be true,” said Kayla when she asked me to giver her eulogy last October. “Oh, and wear the white robe. No black, sad academic robes.” This was Kayla in a nutshell, full of profound clarity of purpose and fully developed opinions that, if one was lucky, might involve sharing a sigh and/or a giggle.

I had some time to anticipate Kayla’s eulogy. We all had some time we aren’t used to having with death to think about and feel it coming. The last months of her life were full of richness, full of a ministry Kayla offered her community and full of tears, mostly from gratitude. And yet, I haven’t had it in me to write about Kayla. Kayla was a person of the word. How the hell does one do her justice with words? One doesn’t. Or at least, I can’t. What I can give you instead are some glimmers of truth I learned from Kayla over the years I knew her. These are some of the truths I imagine will live on through our lives from the Gospel according to Kayla.

“God, rest in my heart

take away my hunger for answers,

let the hours play upon my body

The last few months of Kayla’s life, she lived entirely on the fortification of the God who rested in her heart. She had been moving that direction for years as she endured life’s play upon her body. But this life’s more recent play on her body was not as tender as a beloved’s hands. This life’s touch was exhausting. As she wrote to us all in October

I have begun the process of letting go of my life. I stopped eating on October 1st. I am still hydrating for the moment. I make this choice because I want to leave my life in the same gratitude I have attempted to live my life. I want to die in my home… Because I am losing my ability to stand, transfer, and negotiate my days, that would not be true much longer. And I am exhausted. It is time to give myself back to creation, and Creator.

With this choice, Kayla turned away from the life that she had endured and towards the holy within her again. She lived the lines of this poem as a prayer of release from hunger for food and towards hunger for divine presence alone. And for the first couple months after she stopped eating, the whole process looked from the outside like the hours were indeed playing upon her body once gain like the hands of her beloved. She began to glow with gratitude, giggles I hadn’t heard from her in a long time and a fiercely strong life-force. It was as though the choice to let go of life had freed her in ways none of us anticipated to really live.

There is some Kayla Gospel in here. Or at least a paradoxical parable. When we choose the truth of the God who rests in our hearts, when we choose belonging only to Creator and creation, we are freely alive even in our dying. I know another story about that kind of death. We just started the journey of Lent. We know how the story goes. And we know how it ends.

I imagine Kayla asking me and each of you, “What truth is the God who rests in your heart trying to tell you?”

Lesson 2: Our Bodies are our teachers. A couple weeks into this time of giddy release from life, we began to plan Kayla’s memorial. Of course, she had outlined the whole service we are experiencing today. Our scriptures today were two of those in which she found salvation. The Ecclesiasts scripture she told me was for her about the wars we wage in our very bodies, and that everyone has a version of that war in their beings that must be honored

Kayla had fought this war for decades longer than she ever imagined she would. She waged a war for independence her whole life long. And it was a war she felt she was losing recently. Several years ago, Kayla spoke during our time of confession at Lyndale about her resistance to using a wheelchair, about her resistance to this time of needing a wheelchair. A time for walking, and a time for wheelchairs, she might have added to this scripture.

That Sunday as she sat in her chair for the first time in church instead of using her beloved sticks, she wept as she told us that before she learned to walk, she had learned to fall. This is what her teachers had insisted upon. And of course, it was also the wisdom of her body. Over the years, she had become really good at falling. In fact, she was somewhat infamous for making snow angels in the winter when she fell because, well, might as well do something beautiful with a fall.

But lately, she found herself scared. The falls didn’t scare her. She knew how to do that. It was the getting up that scared her. Each time she fell, getting up was the hard part that required a team of strong humans she often had to call 911 to reach from her bathroom floor. Getting up was so overwhelming that getting anywhere became a problem. And she became isolated. As Kayla sat in her wheelchair in front of her beloved faith community, she told us that her sin had been separation from God, from the God-teacher of her body. In fact, she had been at full on war with the God-teacher of her body. It was a time of war and she so longed for a time of peace. Embracing her wheelchair meant embracing her body’s reality again and also being able to come back to church. She did this again in the last months of her life, made peace with her body and went home not to church but to the Divine.

I imagine Kayla leaning in, making me slightly uncomfortable with her steady eye contact and asking me and you, “What war are you fighting in your own body? And what is your body trying to teach you so that you might live peace again?”

Lesson 3: The Body of Christ is disabled. For Kayla, this passage from 1st Corinthians is her image of a disabled body of Christ. She read this passage to herself countless times over the years whenever she was “dealing with body issues.” It was a reminder that she was made exactly as she was in the image of God, including her cerebral palsy, including her gender and sexuality. Her body was beautifully Divine, it was just that the world didn’t know what to do with that truth.

We don’t live in a culture that recognizes, as the scriptures say, “If one member suffers, all suffer together with it; if one member is honored, all rejoice together with it.” And yet, this scripture names the necessity of each member, of each human piece of community. As Kayla said, “We don’t want to name what we think are unbeautiful.” And yet, God does. And God has so arranged the individual and the collective body, calling each piece beautiful until we believe it ourselves.

Kayla arranged the end of her life much like the rest of her adult life, full of many of us who might have felt like randomly collected pieces of a puzzle for which we hadn’t seen the full picture. But to Kayla, we were each and all a perfect fit in her beloved community. Each one of you sitting here served a divine purpose in Kayla’s life equally beautiful and important as the person sitting next to you. Together, you made up the perfectly disabled body of Christ that Kayla cherished.

“You, beloved community, have been a part of my journey for more years and more transitions than I can count. I have been blessed by each song, each tear, each story, bit of laughter, each communion we have shared. I don’t know what the next hours and days will bring, but I am still here! I ask for your prayers and your presence… in rivers of love and gratitude, Kayla.”

This is how Kayla ended her letter telling us the end of her life was near. It is still true. She is still here, in her Kayla way. I asked her not long after she sent that letter what she thought happened after death. She sighed a Kayla sigh. Will you do it with me? Breathe in and siiiiiiiiiiiiighhhhhh. Ha!

And then we went on to talk about butterflies, or flutterbyes, as she preferred. We talked about how when she was no longer living in her body, she didn’t care what happened as long as she got to be a flutterbye in the lives of those she loved – in your lives. And then we talked about the famous book, The Very Hungry Caterpillar, and how in some ways living bodies are like caterpillars and at death when our bodies are done doing their job, our spirits all become like butterflies or flutterbyes.

The problem with this paradigm, she said, was that she had always been part flutterbye. She had always lived, she said, somewhere between this life and the next. And then she laughed her Kayla laugh while she looked at me with her big watery eyes as though I should have known this already. You know that laugh and that look, right? Kayla was a woman of words. And yet the space between them – the sighs and the laughter and the silent tears of gratitude – were all prayers. So next time you see a flutterbye, pause. Sigh. Or laugh. Or let your eyes tear if that is what needs to happen. And this too will be a prayer. And Kayla will join you in flutterbye glee from the freedom of sweet flight and wings.