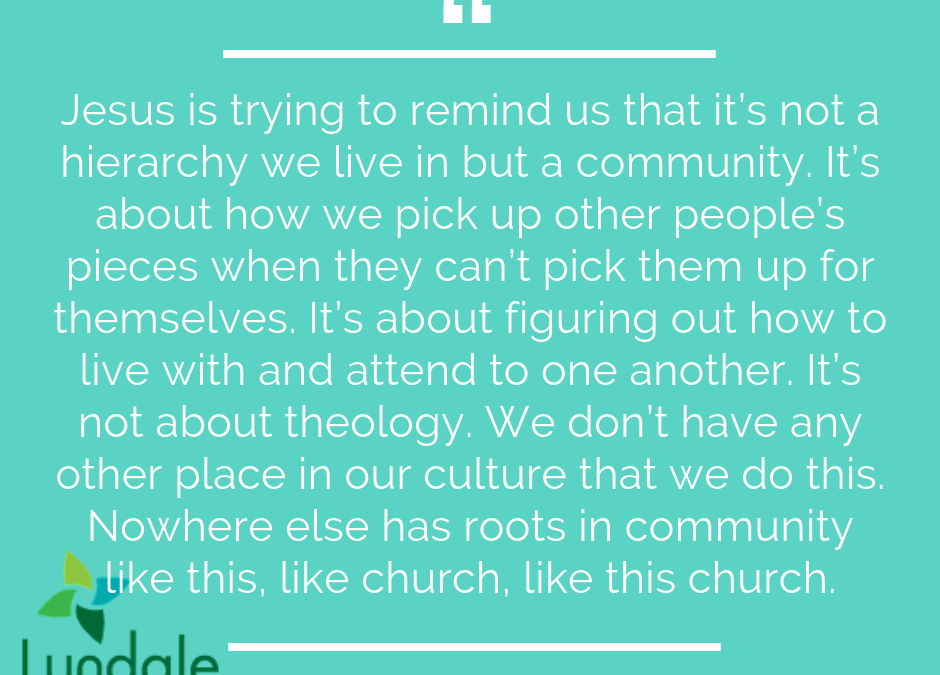 I went to have coffee with our beloved member Kayla a couple weeks ago at her home. I had poured us both a cup, as it’s a lot easier for somebody not using a wheelchair to carry two cups of coffee. Then I opened the refrigerator to get myself a bit of cream and was surprised to find nothing but the single carton of cream inside. I looked at Kayla and said, “My friend, would it be helpful if we talked about some community support around food and meals?” And she casually responded, “Oh! No. I stopped eating.”

Pause. Rewind about 25 years. I’m a child, one of just a few children, at a predominantly LGBTQ church in Minneapolis at the height of the AIDS crisis. The building is made of cinder blocks. We all sit on folding metal chairs, not a pew in site. Kayla sits with her head tilted in her Kayla way, slightly sideways, as she listens with her whole soul to the words of liturgy. She is wearing a pink cotton jumpsuit of sorts. Her hair is dark brown. She has her walking sticks, as she called them, sitting beside her. I didn’t know her well, but she was unforgettable in her grace-filled way of walking with her sticks as though they were a part of her. They let her move against gravity and at all odds of cerebral palsy. As a child, I found her walk remarkable. I didn’t know at the time that as a child, she didn’t think she would live into the adulthood she was then living.

Back to Kayla’s kitchen table. Two weeks ago. I had known Kayla would seek to die well, to die in her home, to die with the community of Lyndale surrounding her, to die as much on her own terms as humanly possible. We had talked about this in the abstract for years. So had our previous pastor at Lyndale, Don. But NOW?! I listened. She unfurled her story. Of living in a body that, as much as she loved it, was increasingly leaving her control, that was becoming a terrifying daily trap, that had outlived her understanding of her life-expectancy by decades. I peppered her with questions too. Not to change her mind. This is Kayla, after all. But to seek to understand our beloved mystic friend who has, for many years already, lived somewhere between here and eternity. Eventually I realized I was mad in own process of realization and grief. I’M not ready for this, I said outloud. Kayla tilted her head in her Kayla way and listened with her whole soul to me.

“So Jesus called them and said to them, “You know that among the Gentiles those whom they recognize as their rulers lord it over them, and their great ones are tyrants over them. 43 But it is not so among you; but whoever wishes to become great among you must be your servant, 44 and whoever wishes to be first among you must be slave of all. 45 For the Son of Man came not to be served but to serve, and to give his life a ransom for many.”

I was reading this passage again this week in preparation for church and it made me grumpy. I’m not so oblivious as John and James to think that following in the way of Jesus is going to look like a heavenly royal banquet where my biggest concern is about the seating arrangement. I have the benefit of hindsight over James and John. I know the end of Jesus’ story. But this language of being a servant and slave has always seemed more problematic to me than useful, let alone the floodgates of bad atonement theologies that have streamed from this word often translated as ‘ransom.’

I called Kayla Friday morning for one of our now regular, “how is life without eating” chats. Surprisingly unchanged, she told me. And so I decided maybe our mystic in residence might have some words of wisdom to share on this passage. She did, after all, go to seminary. She came close to ordination, but was too far ahead of her time for the church to catch up with her call as an openly lesbian, visibly disabled woman. We commiserated, but Kayla said this passage also makes her think of one of her favorite hymns we sing at Lyndale, “Won’t you let me be my servant.” She said she loves “singing that song to each other.” For her, the point of the song, and hence of this passage, is that “being of servant is a part of everybody’s role.” She said, “Jesus is trying to remind us that it’s not a hierarchy we live in but a community. It’s not about those words servant and slave, it’s how do we pick up other people’s pieces when they can’t pick them up for themselves. It’s about figuring out how to live with and attend to one another. It’s not about theology. We don’t have any other place in our culture that we do this. Nowhere else has roots in community like this, like church, like this church.” She paused. “So, there. There’s a sermon and a half for you,” she said, and laughed.

I agree. It is all of this. AND it IS those two words, servant and slave. I think we are supposed to bristle at them – as people who are not in servitude or slavery. We are supposed to recognize that when those roles are forced, they are horrifying. Jesus lived in a time of slavery. But Jesus is imagining a different world. This is not some people being bound in servitude or slavery to a caste tyrants. This is a world where there are no people who are just tyrants or just slaves. In this world, we recognize that we all have the capacity to be both and then choose to find the balance of a life of freely giving and freely receiving. It’s about being famous, not like a tyrant, but in the way the Arab American poet Naomi Shihab Nye describes:

I want to be famous in the way a pulley is famous,

or a buttonhole, not because it did anything spectacular,

but because it never forgot what it could do.[1]

Which leads me to this season we call stewardship, or tending to the gifts the Holy One has given us so that we might be of service, of use, or even famous in the sense of a buttonhole to those in this community and beyond. This is the time we remember that all that we have does not actually belong to us. That’s just a lie of capitalism and empires past and present. What we have is the opportunity to make right relationship with each other through how we choose to act on our resources of time, talent and tithe so that we CAN DO awesome things together.

When Kayla’s body returns to creation and her Creator, her home will also, as she puts it, come full circle. She bought her home from Micheal Branscom, another Lyndale member, almost 20 years ago in a “relationship that was holy and life giving and that has kept giving.” Because of her commitment to the kind of community Jesus is talking about in our passage for today, Kayla will be offering the asset of her home back to Lyndale at her passing. In her words, “I want it to keep giving after me. It’s about gratitude.”

Our stewardship season theme this year is “root to rise.” For some of us, it is time to dig deep and think about what it might mean to keep giving to this community in gratitude after we are gone – at whatever scale that might be. For others, it’s time to dig deep and think about what talents and time we might offer this community in committee service or for great gathering fundraisers. For all of us, it is a time to dig deep and think about what measure of the financial resources in our lives it would feel right and good to offer back regularly to the holy work of this community – what we call a pledge. Monthly, planned contributions are what allow us to keep the lights on and our staff working in service of beloved community here and now. Our goal this year is that each of us will commit to a tithe, or a 10% increase, on our pledge from last year. While it isn’t up to me to decide how that money is spent, it could allow us to cover something like an increase in our health insurance coverage for our staff. Or a new ministry venture. Or a new community resource and reparations fund. The possibilities are endless when we gather what we have together in service of one another.

Kayla often talks about her home as her treehouse. That’s somehow fitting this year. As we enter this season of giving, of rooting to rise, my challenge to you is to try to be like oak trees. If I were Jesus, I would create a parable of the oak tree to explain this whole service thing to James and John. Oak trees do not just root deep, they root wide and grab hold of each others’ roots under the soil. They know that when they are connected at the root, they are stronger, they can rise and rise and rise into the sky as they grow and be stabilized by each other. This is why the oak trees were some of the only trees still standing after Hurricane Katrina – baffling passers by. For miles and miles and miles, they were an interconnected grid under the soil holding each other up despite the strength of the storm.

May we be so rooted, so strong, through the storms of living and dying together. Amen.