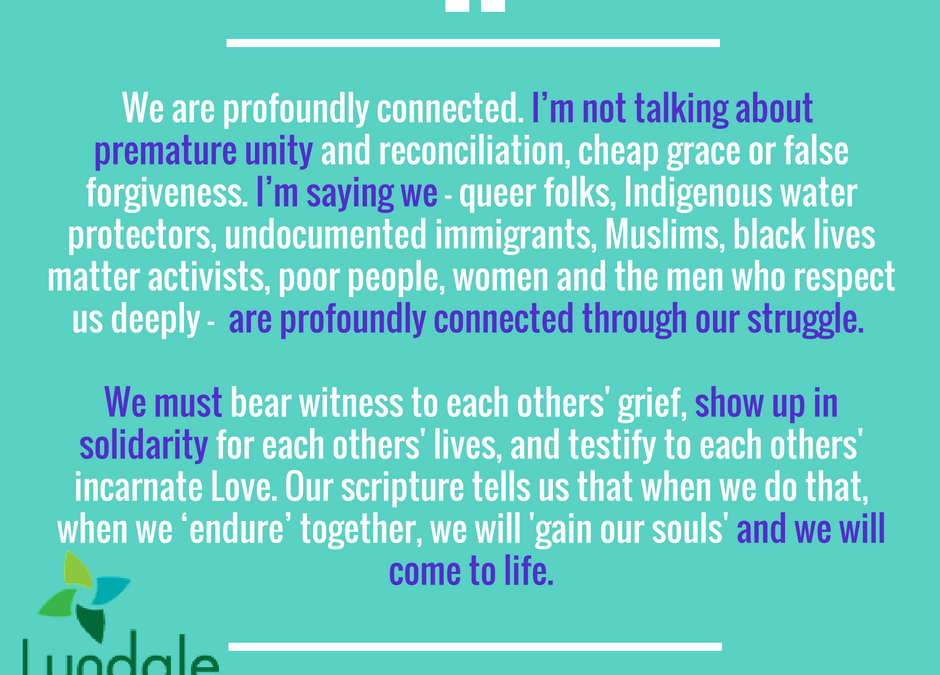 [A caveat: While I am legally not allowed to endorse a political candidate as a pastor, there is nothing I can find that says I can’t call out Pharaoh when I see him enfleshed in our times.]

Beloveds. I read this scripture this week, and I felt like it was speaking right into our world. The Gospel of Luke was written in the early 100s CE, after the Jewish temple in this passage was destroyed by the Roman forces of persecution, after imperial wars and insurrections were ubiquitous, after Jesus was arrested and executed by the state, after many others following him faced the same fate and were betrayed by their own families along the way. In other words, this is not a text that is about an unknown future, but a way of making meaning of destruction that has already happened and continues to reverberate through a community.

And as the days since have unfolded, some of our deepest fears are already coming true. Nazi-related, white supremacist graffiti has popped up in places across the country. Not just in red states or counties. In places like Philadelphia. People of color are being verbally AND physically assaulted by mobs of white people, even in places like Brooklyn, NY and our own Twin Cities. Water fountains in a Florida high school were labeled by kids, White and Colored. A white woman threw gasoline on a Muslim woman wearing hijab. A white, gay man was beaten bloody in Santa Monica, CA. Dozens of boys reportedly grabbed girls’ vaginas in the hall at school, saying “if the President can do it, so can I.” There has been a spike in suicides of trans* teenagers who were scared out of their minds. Racist and anti-immigrant graffiti has appeared in our own larger metro area high school bathrooms. And these are not freak incidents, or isolated attacks. The highly organized KKK in North Carolina has announced a victory rally to celebrate Trump’s win. Our soon to be Vice President met on Thursday with the National Organization for Marriage to discuss their policy platform that repeals marriage equality. We don’t know what policies are coming for sure, but we now have collectively mainstreamed and politically sanctioned racism, xenophobia, sexism, heterosexism, Islamophobia and the list goes on.

“Nation will rise against nation… They will persecute you… You will be betrayed even by parents and brothers, by relatives and friends.”

This is not the future for us, either. It has already happened. And I don’t know about you, but I have been in messy grief this week. For the parts of me that are under attack – my safety and freedom as a woman and as a queer person – I have been profoundly angry. And I tend to internalize and get anxious, not angry. But I grew up in a gay family in the 1980s and that means that I know how to do this. I know how to exist in a family that is not recognized or protected in any way by the state – to be afraid of being taken away from my parents, that I wouldn’t be able to get to my mom in a hospital, not even able to imagine the benefits of marriage. I won’t go back.

And for the parts of me that have privilege – my whiteness, my cis-genderedness, my upper-middle classness, my legal status as an American citizen – I feel aware that my friends who don’t have these privileges have been living with the reality of persecution for some time and this moment in our mainstream political narrative has just made it visible to me. The hoods are off. In particular, my friends of color have said to me with kindness and fierceness, this is not new. It’s just on display for all of us to see now. For this, I also grieve.

This is not where our scripture or our collective story ends, though, thank God. Our scripture tells us this kind of moment is actually an opportunity to testify. My friends who grew up in more conservative communities and have found a bastion of safety here, don’t freak out… stay with me. The scripture says:

“They will arrest you and persecute you… because of my name. This will give you an opportunity to testify.”

In translation for our times, the scripture might read: They will and they have arrested you and persecuted you who are not complicit with the oppressive status quo…because of your fierce, Holy Love. This will give you an opportunity to bear witness and tell the world about that Love.

So what story of fierce love will you testify to, my friends? How will you put yourself in the way of what’s happening, even if you don’t have to because of your privileges of passing or sex or skin color, to bear witness? What story will you tell at Thanksgiving to your family members with whom you disagree politically? What story will you be able to tell about yourself to your grandkids 30 years from now? What story of fierce, holy love in your life, of our community, of our country, do we have the opportunity to write together right now?

There is one story, one testimony, I think this election has given us that IS a gift. And that is that we are profoundly connected. No, I’m not talking about some kind of unity and reconciliation, some kind of cheap grace of false forgiveness. I’m saying WE – queer folks, Indigenous water protectors, undocumented immigrants, Muslims, black lives matter activists, poor people, women and the men who respect us deeply – WE are profoundly connected through our struggle. The campaign rhetoric of the last two years and the hate crimes done in Trump’s name over the last week have showed us that. We must bear witness to each others’ grief, show up in solidarity for each others’ lives, and testify to each others’ Love. Our scripture tells us that when we do that, when we ‘endure’ together, we will gain our souls, we will come to life.

That’s the long game. There are going to be some big stories to write over the coming months and years. But this morning, I have an invitation for you write a very small story. My wise friend and colleague Rev. Ashley Horan texted me on Wednesday and said this:

“Thinking about my queer and trans and Muslim and undocumented and poor neighbors, I realized that I needed to tell them – before doing anything else – that I see them and I love them. So I bought sidewalk chalk, and wrote love notes to my neighborhood.

As I was working, at least seven or eight kids in my neighborhood–none of them ones that I had known before –stopped and talked with me on their way home from school. They told me about their fears, their hopes, their dreams. One of them took the time to stop and create a square of his own…

My unsolicited advice: get some sidewalk chalk, and meditate about who you love – rather than who you fear – for a little while. This will certainly not change the world. There is so much other work to do. But it saved my heart today.”

Today, you’re going to get some sidewalk chalk from us. But right now, meditate on who you love and who needs to know that you stand in solidarity with them.

In the midst of our grief, we will testify to fierce love. We will endure together and in doing so, gain our souls and our lives.