Slowing Down for Justice Now: On Justine Damond and Racial Justice 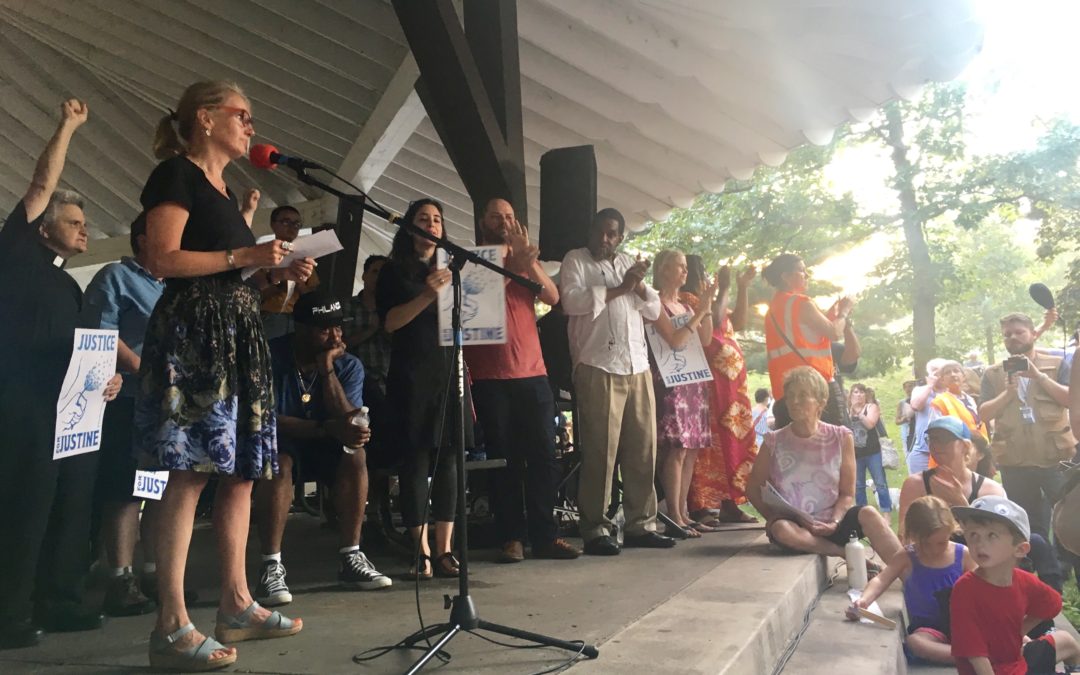 Some 500 years or so BCE, the people of the ancient tribe of Judah were exiled along the banks of the Euphrates river. They were in captivity under the Babylonian Empire, an empire that worshiped idols of power like empires we know throughout the ages. Into this prolonged time of fear, of grief, and oppression, the prophet Isaiah spoke these words of comfort:

Isaiah 44:6-8
6 Thus says the Lord, the King of Israel
and Redeemer, the Lord of hosts:
I am the first and I am the last;
besides me there is no god.
7 Who is like me? Let them proclaim it,
let them declare and set it forth before me.
Who has announced from of old the things to come?
Let them tell us what is yet to be.
8 Do not fear, or be afraid;
have I not told you from of old and declared it?
You are my witnesses!
Is there any god besides me?
There is no other rock; I know not one.

I’ve added for us today a contemporary reading from Naima Penniman, a woman of color who is an activist, artist and educator:

“When Hurricane Katrina slammed into the Gulf Coast, almost everything lost its footing. Houses were detached from their foundations, trees and shrubbery were uprooted, sign posts and vehicles floated down the rivers that became of the streets. But amidst the whipping winds and surging water, the oak tree held its ground. How? Instead of digging its roots deep and solitary into the earth, the oak tree grows its roots wide and interlocks with other oak trees in the surrounding area. And you can’t bring down a hundred oak trees bound beneath the soil! How do we survive the unnatural disasters of climate change, environmental injustice, over-policing, mass-imprisonment, militarization, economic inequality, corporate globalization, and displacement? We must connect in the underground, my people! In this way, we shall survive.”[1]

On Tuesday night, I sat among a group of about 20 people who all lived within a couple blocks of where Justine Damond was shot and killed by police last Saturday night. This was a group of mostly white neighbors who wanted to come together to grieve Justine, and also connect the dots to all the other police killings in our city. Philando. Jamar. Marcus. The list goes on. Sarah Kuhnen, who lives around the corner from the Damond family, invited me to support her and also because I live about 5 blocks away from her. We mostly tried to listen – to each other, and do the activists from places like the NAACP who had been invited because they have worked on these issues of systemic racism and police brutality for a long time.

Time felt funny in that cozy living room conversation. Grief around death tends to slow my sense of time. The now becomes longer, in a way. And yet, I felt the crush of the 24/7 news cycle around us in that room. Literally, around us as trucks from TV stations around the world had been lining the block for days.

Writer and activist Adrienne Maree Brown puts language to the squeeze I felt. She says: “There is such urgency in the multitude of crises we face, it can make it hard to remember that in fact it is urgency thinking (urgent constant unsustainable growth) that got us to this point, and that our potential success lies in doing deep, slow, intentional work.”[2]

It wasn’t until the urgency of getting it right as a majority white room of people trying to talk about racial justice ceded that we began to slow into deeper relationship, into the harder and necessary work we were seeking for our city. About two hours into the evening, a 71 year-old white woman who had lived in the neighborhood for decades told her story. She spoke of being the granddaughter of the first female police officer in our city. She spoke of being a defender of police. She spoke of her commitment to racial justice. She told her own story of grief after what happened on her block when Justine was shot. She said that for the first time in her life, she was afraid to call the police after Justine was shot.

And then Jason Sole spoke. Jason is a black man in his late 30s who teaches about the criminal justice system at Hamline University. He volunteers with the NAACP also. He looked up and said, “Wow. So this happened 3 days ago for you? You started being afraid to call the police three days ago?” And the woman said yes. Jason shook his head, breathed deep and spoke again, “I have never called the cops in my life… It has never been safe for me to call the police.” And the room fell into a holy hush.

Out of that slowed down time, out of that holy hush, eventually the room decided we needed to hold a public event to connect the dots between Justine’s death and all the other deaths at the hands of police. There needed to be people from our neighborhood who would tell their stories and help their neighborhood feel the bigger moment and movement. Into the long pause after the question of who would speak, Sarah Kuhnen bravely offered herself.

My friends, we are not boulders, unshakably steady in our presence for justice and healing and love like the image of God in our scripture today. To become that kind of presence in the world, we have to become like oak trees instead. “Instead of digging its roots deep and solitary into the earth, the oak tree grows its roots wide and interlocks with other oak trees in the surrounding area. And you can’t bring down a hundred oak trees bound beneath the soil!” When Sarah offered to speak, she dug her roots wide. Her roots began to reach out for Jason’s roots. And when she spoke to a crowd of hundreds gathered in southwest Minneapolis to march for healing and justice, her roots extended down and out towards the hundreds of other oak tree people gathered together from across the Twin Cities across divisions of race, generation, class and so much more. And by the end of her talking, there was a new underground root system coming together that hadn’t been forged before in this community. Listen now, and deepen your roots. Listen and reach wide, my friends. “We must connect in the underground, my people! In this way, we shall survive.”

My name is Sarah Kuhnen and as a neighbor of Justine, I want to first give my condolences to Don, the Damond family and all of Justine’s family and friends in Australia. I want to thank all of you who came to our neighborhood, last Sunday night at the vigil, in solidarity from North Minneapolis, from across MN, who have also experienced police violence.

I stand before you heartbroken. For 28 years, I have lived and raised my family one block away from where Justine was killed. On my block are some of my closest friends with whom we have a tradition when somebody loses a loved one, the neighbors are their for you not only with cards, meals and hugs, but a memorial offering and continued support. I’m here today. Because this tragedy is close to home for me, in a way I have never had to experience before with the police shootings in our city.

As a white woman, I have never had to worry about my own safety when calling the police. But I know that is a luxury that people of color in our city don’t have. Valarie Castile, Philando Castile’s mother, didn’t get to call the police without worrying about her own safety or the safety of her son. People of color have been killed by the police for far too long.

It is time, it is past time, for me and other white people to wake up to that reality. Because it is all of our realities now. These are all our mothers and all our children, our sons and our daughters. We all deserve to feel safe – including our Somali neighbors who were already facing threats that are only intensified now.