Sabbath and the Practice of Right-Sizing 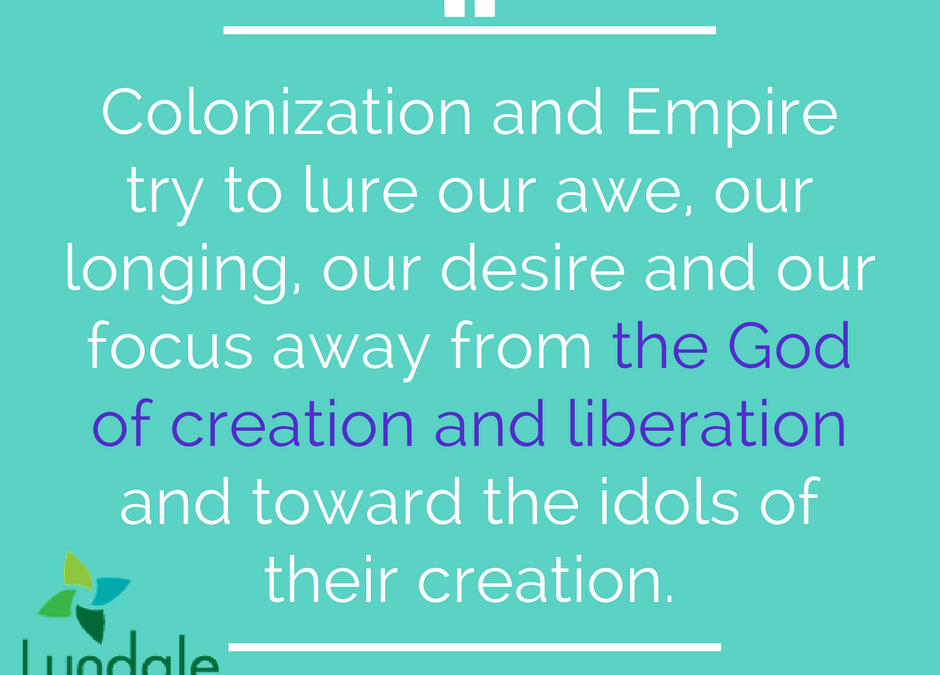 Round our skiff be God’s aboutness…

Earlier this month, Maggie, Shannon, my mom and I travelled to Scotland to visit the land of our MacKenzie ancestors. There are many, many stories to share from our experience but on one day in particular, I watched as Shannon was as alive as I’ve ever seen her. In response to the picture I posted of her on Facebook, someone remarked that she was glowing.

We had taken a boat from the Isle of Mull, one of the Inner Hebrides Islands to a small, uninhabited island called Staffa. The ride over was on a fast boat in which we bounced amidst small waves and intermittently got sprayed as the wind blew the wake into our faces. It was a rare sunny day and we held on and rhythmically bounced as you would on a cantering horse. Shannon stood encircled in my arms and we both gazed out at the Hebridean sea and the islands not too far away. My mom said later that she watched us from inside the cabin and we looked like we were in our glory. When we got to Staffa, we disembarked and hiked amidst the purple heather and looked over the volcanic cliffs at Iona and back to the Isle of Mull. I wish I could describe the combination of the smell of the saltwater air, the feel of the wind and sun on our faces, the sight of sea and heather-covered, mountainous islands with puffins flying and diving and the energy that I can only explain as sacred.

When Shannon was asked how the day was on a scale of 1-10, she responded, “Infinity.” Because I could have had a similar reaction, I think I know what she meant. The pictures of us show us all grinning from ear to ear. The same is true as we made our way to Iona and walked through the ancient abbey there. As I’ve closed my eyes and remembered that day and as I’ve looked back at pictures, I think our experience might have something to say about Sabbath practice. That day amidst the sea and the wind and the stones and the heather (the same place from which Round Our Skiff was written), I think we all had an experience of simultaneously feeling very small amidst an awe-inspiring universe, very momentary in a place whose ancient history was almost palpable AND completely held and known and named in our beings. Our Jewish kindred call it the spiritual practice of right-sizing. We were neither too big, nor too small. We were inhabiting our rightful place in God’s creation. We knew who and whose we were.

I think the Psalmist might have being talking about this when they wrote:

O Lord, you have searched me and known me.
You know when I sit down and when I rise up;
you discern my thoughts from far away.
You search out my path and my lying down,
and are acquainted with all my ways…

How weighty to me are your thoughts, O God!
How vast is the sum of them!
I try to count them—they are more than the sand;
I come to the end—I am still with you.

This whole summer, we’ve been exploring the notion, history and practice of Sabbath. I have been deeply grateful for this exploration that has become a kind of annual summer tradition here at Lyndale. I’ve been deeply grateful for the wisdom of Rabbi Abraham Joshua Heschel and for the various practices we’ve tried both during worship and in the course of our daily lives.

As I pondered what piece of Sabbath practice I might offer on this, our final Summer Sabbath Sunday, I found myself drawn to a few things.

First, I re-read Exodus 20, that portion of Scripture that talks about Sabbath. As I did so, I was reminded that the line that reads “remember the Sabbath day and keep it holy” is directly preceded by these lines:

But they suggest to me that the practice of keeping, of re-membering, of embodying Sabbath starts with the practice of putting God at the center, of rooting ourselves in God. Sabbath practice starts with proper focus and orientation. For Sabbath practice, our orientation is on the One who is first and foremost liberator—I am Yahweh, your God, who brought you out of the land of Egypt, out of the house of slavery.

And if our orientation and focus are on the God of liberation, we don’t make idols for ourselves—not in heaven, not on earth, not under the earth.

Another way of saying this is that Sabbath practice begins with right-sizing. When we start by focusing on the reality that God, the creator of heaven and earth, the liberator of generations, is our God; when we orient or turn our proper awe and wonder and longing toward God, we neither overestimate our own power, nor idolize powers that are destructive or death-dealing.

I think I’ve been drawn to this question of focus and orientation out of my deep sense of being offended by the current President and out of my own over-active ego. Let me explain.

I don’t know about you, but part of my struggle right now is how dis-oriented I feel on a daily basis. I almost can’t believe the distortions. And all the uproar over statues built in the shape and form of Confederate generals but whose purpose was and is to idolize white supremacy, Jim Crow and the terrorizing of Black people doesn’t require much unpacking to see how the worship of idols is happening all around us.

We are living amidst deeply distorting Empire and its siren calls.

And for me, part of the power of Empire and dis-orientation that happens is that my ego gets all out of whack. And terror or despair sets in… “Oh, my God, it’s all up to me. I have to figure out how I can march in every march and sign every petition and meet with every legislator and be at every meeting” and on and on. Or, alternatively, “Oh, my God, there is nothing that I can do. Nothing I can think of will make any difference. We are doomed.”

When this happens, my focus has successfully been turned and rather than being oriented to the God of creation and liberation, I am worshiping at the altar built by white supremacy.

In her masterpiece, A Wind in the Door, Madeleine L’Engle shares the story of a group of creatures large and small—farandola, snakes, humans, cherubim– turning away from the lies, the distortions, the dis-orientation of what she calls the powers of nothingness and finding their rightful place in the order of things. From that place, they are able to stop the death-dealing and bring about genuine healing.

Along the way, they are encouraged in their right-sizing:

I fill you with Naming.

But we must not be dis-oriented. We must not let our focus be lured away. Instead, we must remember that the God of Creation has searched us and known us. The One who liberated and liberates offers us re-orientation in every moment. So let us right-size. Let us claim our rightful place in the order of things that we might also stop the death-dealing and partake in God’s healing justice. Amen.