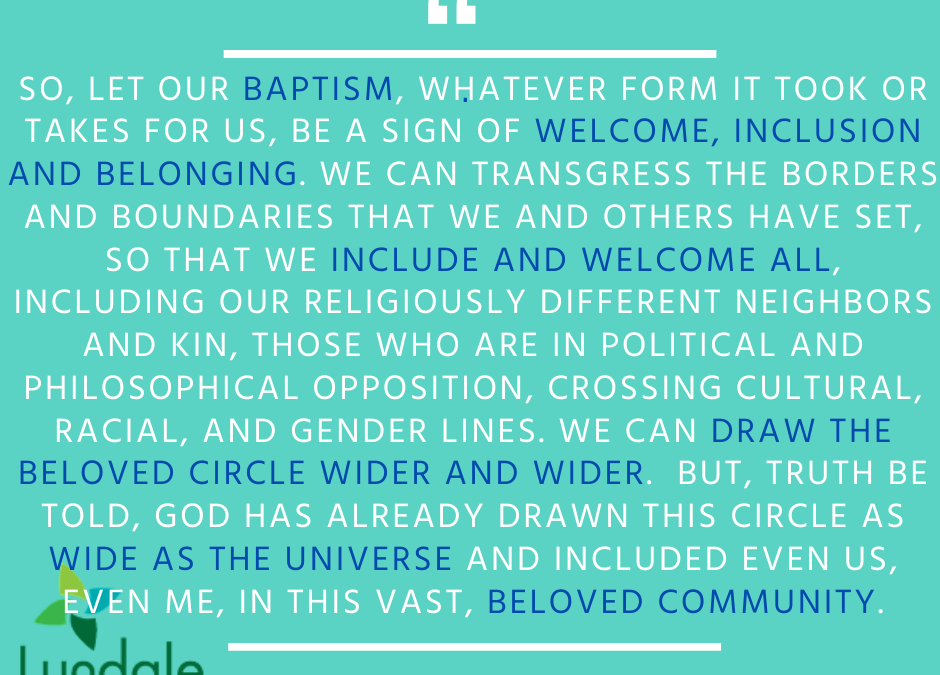 One of my earliest memories was sometime when I was still pre-school age, I believe.  This is how I remember it:

I was with two of my sisters in a Sunday School class in the big Lutheran Church in my hometown.  It was being taught by my grandmother, who was a reluctant Lutheran at the time, having been married to my Norwegian Lutheran grandfather.  When the class was finished, our Grandma Henden announced that she was taking us to the Tryggestads’ church.  The Tryggestads are our older cousins and we looked up to them and wanted to be with them all the time!  So, we were excited.

Their church was the Church of Christ in town.  It also had been our dad’s church before he married our German Lutheran mother.  Now, the next part of this memory that I can recall is sitting in the pew with Grandma, the Tryggestads, and our dad.  And suddenly some curtains are drawn open near our pew and there’s our mother behind those curtains standing next to a man.  The man spoke some words which, based on my later experiences in that church, probably was acknowledging Mom’s confession of faith and commitment, and ending with “I baptize you in the name of the Father, the Son, and the Holy Spirit, buried like Christ and rising to newness of life”, while he lowered her into the tank of water, and she come back up all wet.

That was quite a sight for a preschooler who had mainly experienced church at our mom’s Lutheran Church or at our grandparents’ Lutheran Church.  And, probably why some version of it is seared in my memory.  And, from then on our growing up church experience was at that Church of Christ in Viroqua, WI.  Where we went to Sunday School and worshipped with our dad’s sister and family, the Tryggestads.  And, once in a while, our Grandma Henden, the reluctant Lutheran.  There’s more to this family story and history, but too much to go into now.  Just ask me sometime.  Anyway, we Henden kids enjoyed this extra time with our cousins.

Now, in our Gospel story today, we find Jesus looking for his “crazy” prophet of a cousin, John.  Out doing his thing at the Jordan River in Roman occupied Judea and Palestine.  As we know he was doing his prophetic admonishing and preaching, proclaiming the coming reign of God, and urging people to get right and be prepared.  And he seemed to have adapted the water purification rite of the Jewish community, whether the Mikveh or the proselyte water ritual.  Or perhaps even that of the Essenes, a small Jewish sect at the time.  Thus, “baptizing” people who came to him and wanted to get right with God and to be purified for God’s coming reign.

But, when his cousin came to the Jordan to be baptized, John tried to talk him out of it.  Believing that Jesus was greater than he and that his cousin instead should baptize him.  But Jesus responds with this curious saying, according to Matthew: “Let it be so now; for it is proper for us in this way to fulfill all righteousness.”  Now, what the heck does that mean? Was Jesus seeking to become righteous by having his sins forgiven or is “righteousness” in the Bible more than that?

“The concept of righteousness, especially in the Old Testament, is not limited to moral uprightness. More importantly, righteousness is a relational concept. For example, Abraham “believed God, and God reckoned it to him as righteousness” (in Genesis 15). Abraham was righteous because he trusted God, not because he was morally perfect. Human righteousness entails being put in a right relationship before God, as the prophet Habakkuk states, “The righteous live by their faith”.  God’s righteousness, then, is expressed in God’s covenantal faithfulness and salvation for Israel.”

And I believe that that covenant was based on being in relationship with the Divine and with their community.  Something that the Hebrew prophets often proclaimed to the people and to their leaders.  That they belonged to this covenant and to the community of God.  And it’s that covenant that John and his baptism were calling people to, in preparation for the coming (and now) community or kin-dom of God.  A kin-dom that his cousin, Jesus, was also joining and would soon proclaim throughout the region, to accomplish the fulness of God’s righteousness.  Righteousness that is more than just being morally right.

And, I think we can say that baptism is a sign of this belonging.  It is entered into and given without any gatekeeping and is free of debates.  Or it should be.

After our mother’s “re-baptism” as an adult, my other childhood memories include these debates about baptism with our Lutheran kin and cousins on her side of the family.  It became a sign of who’s right and who is really going to heaven or not, based on the kind of baptism and the age of the baptized.  Oh my!  And I became one of those debating gatekeepers, sure that our church was right, and the Lutherans were wrong.  I could be an irritating nerd about it when I was a youth.  Thankfully I grew older and a little wiser about the complicated and nuanced history and contexts around this and much more about the larger Christian community ecumenical.  And even before then our Grandma Bay laid down the law to end these debates at the family gatherings.

As UCC commentator, Cheryl A. Lindsay, has reflected:

“Those waters not only cleanse; they refresh and renew.  They expand beyond borders, they part to allow movement; and they even rage in the storm.”

“The church in Matthew’s day could be identified as that of our time as much as it was then. In the midst of cultural clashes, political turmoil, and religious discrediting, we benefit from public declaration of good news that is expansive, inclusive, diverse, and equitable. We can rejoice in our primary ritual of welcome and acceptance into the beloved community. We can declare to the life-long member, the person off the street, and even Jesus, you belong.”

So, let our baptism, whatever form it took or takes for us, be a sign of welcome, inclusion and belonging.  Being part of a covenantal community of God.  Just as John’s cousin, Jesus, humbled himself and showed us.  And as we read later in this story: “…a voice from heaven said, ‘This is my Child, the Beloved, with whom I am well pleased’.”  So, I believe that we not only can be and are a part of a covenantal community but a beloved community.  We can transgress the borders and boundaries that we and others have set, so that we include and welcome all, including our religiously different neighbors and kin, those who are in political and philosophical opposition, crossing cultural, racial, and gender lines.  We can draw the beloved circle wider and wider.  But, truth be told, God has already drawn this circle as wide as the universe and included even us, even me, in this vast, beloved community.

Sometimes I wish that I knew this when I was young: that not only did our Church of Christ cousins belong, but our Lutheran cousins did and do as well.  So, I call on myself and all of us to prophetically proclaim with John and with Jesus, with the Hebrew prophets and with those of our times: “the kin-dom and the beloved community of God is coming, it is even here and beginning now.  Let us be prepared, let us work to fulfill the righteousness and justice of God; let us welcome all because all belong!”