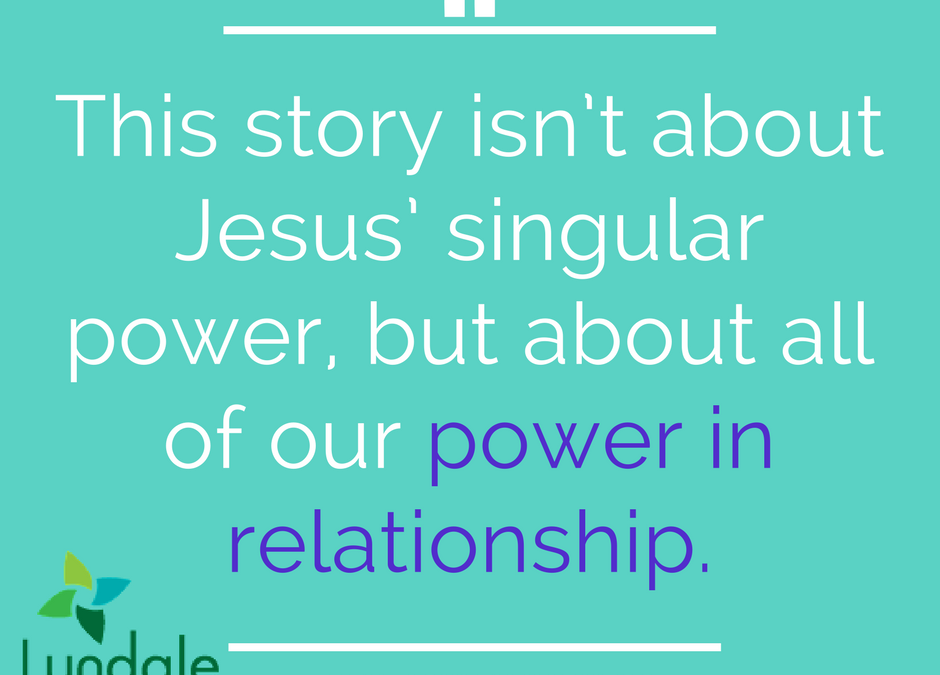 Scripture: The Loaves and Fishes

On Thursday, I didn’t buy anything. It took being three hours away from the Twin Cities, secluded at a cabin where my cell phone didn’t get service. Instead, we already had just what we needed when shared with neighbors. We nestled ourselves in the cold, rainy day under blankets with cups of coffee and good books – mine on spiritual defiance of empire which you are sure to hear more about another time. Later in the day we meandered over to our host’s cabin, the beloved Lyndale members Fred Smith and Mary Martin, where they had prepared a simple and delicious lunch of homemade squash soup. More meandering, reading, canoeing in a moment of the rain letting up, and conversation unfolded over the rest of the day. And we made a family favorite of our own for a shared dinner – Angela’s dad’s grilled chicken teriyaki specialty, my mom’s favorite kale salad made in a way you can’t really taste the kale, local corn on the cob and grilled local peaches with ice cream – all served over a healthy dose of communal love and chatting.

Why am I telling you all this? I’m not trying to make you jealous, really. I’m telling you all this because it took months to schedule this day away, with enough provisions to share. Because in our culture of immediacy, stores open 24 hours a day, over-scheduled lives, and purchasing power in many of our pockets on our cell phones, it takes real intention to step back into the Sabbath practice of avoiding commerce at the heart of the traditional Sabbath practice commanded in the Bible. As modern or post-modern Christians especially, we aren’t used to practicing this kind of Sabbath as many of our Jewish friends do every week on Saturdays. So it takes work, which may seem ironic as Sabbath is all about the cessation of work.

But I have to tell you, the result was heavenly. The result was divestment from an economy of commodification – of my time, of myself, of each other – and an investment in “an economy of neighborliness.”[1] That’s what biblical scholar Walter Brueggeman calls the economy that Sabbath invites us into – one rooted in “mercy, steadfast love, and faithfulness” of relationship between the divine and creation and creation with each other.

That’s a lot of what a friend of mine calls “swirly talk,” fancy theological talk to explain what’s happening in our scripture story today. This is one of the most famous stories in the bible. It’s a story that’s in all of the different versions of the gospel – which is surprisingly rare. But we often hear this story as one that is designed to point at Jesus’ power to make multitudes out of a few measly loaves of bread. And yet, that’s not what this story is really about. After all, not too far back in the story, Jesus had in fact refused to make unlimited food magically appear saying one does not live by bread alone. So it doesn’t make any sense that he would have just up and changed his mind. This story isn’t about Jesus’ singular power, but about all of our power in relationship.

As one commentary set the context of this scripture passage: “Rome considered itself to be the world’s bead basket. A coin … had the emperor’s image on one side and on the other side Ceres, the goddess of agriculture, with the words meaning, ‘the annual harvest of the emperor.’ This gave the provision of food a theological interpretation in terms of Roman religion: the emperor is Ceres’s agent for providing food.”[2] Let’s make that a little clearer: The emperor Caesar was essentially a lower imperial God of food – the only point of access. So when Jesus refused to send his crowd of over 5000 into town to buy food, it was a boycott of sorts, a moment of divestment from the Roman economy, a kind of both treason and heresy. Instead of buying from Rome, Jesus blessed the little provision of bread and fish they had and broke it up to start a trend of sharing, of a neighborly economy. And I imagine that there was something contagious in the best possible way that began to happen. As Jesus blessed and broke open what he and those closest to him had, so too did everyone begin to do the same, to sheepishly unload their pockets for bits of dried fruit and ancient protein bars and bread and begin to break them a part in a lived blessing of abundance.

This is the real miracle. It’s not about one man thousands of years ago and a supernatural power. That’s a sorry legacy for Jesus. This is a story about the possibility for each of us today to trust there is something bigger than what we see immediately in front of us – an economy of individualism, and economy that makes everything we are something to be owned or bought or sold.

Sabbath teaches us to practice that economy of neighborliness, of wholeness. As biblical scholar Brueggeman says, “Sabbath is not simply a pause. It is an occasion for reimagining all of social life away from coercion and competition to compassionate solidarity. Such solidarity is imaginable and capable of performance only when the drivenness of acquisitiveness is broken. Sabbath is not simply the pause that refreshes. It is the pause that transforms.”[3]

I have been thinking of this practice in less fancy language. I’ve been thinking about it in terms of practicing enoughness. What I mean by that is this. Take yourself to the shore with Jesus of our scripture story. Imagine the crowds. Imagine you have been walking all day. Imagine you might be hangry. And then you realize you all need to eat and you aren’t going to get where you are planning to go to that night. What do you do? I would have had at least one protein bar in my bag. Would I be willing to share? It sounds so kindergarten to ask this question. But would I really be willing to have enough trust in the crowd to practice enoughness in that moment – not to stalk off to the store a few miles away, but to just try breaking and blessing what I have? I dare my ancient self.

Or think bigger. Think about the housing crisis we face. When I lived in New York City, the problem was much more in my face than here in Minneapolis. I remember a colleague working in anti-poverty work in NYC saying that the real problem was not actually housing. There is plenty of housing in NYC. There are thousands of apartments sitting empty all the time. In fact there are more than enough empty apartments in NYC to house all the people in need of housing. The problem is that the stakes are higher than my willingness to share my protein bar at the end of long day. It’s about a willingness to practice enoughness of space, the greatest commodity in NYC. There is a lot of imagined profit to lose when practicing enoughness collectively. The measuring stick of profit in God’s neighborly economy isn’t money, though. It’s wholeness. And you can’t count stacks of wholeness or trade them.

One could play the same imagination game with so many of the so-called issues that vex our country, that have popped up in headlines just this week. What could our country look like if immigration, healthcare and policing all operated out of a paradigm of practicing communal enoughness? Of practicing a neighborly economy instead of a commodity economy? It can feel like sci-fi to imagine the possibilities, especially on such a large and systemic scale. It can sound Pollyanna and naïve. And yet, I think it is the command of our Gospel story today to boycott the kind of empire thinking Jesus boycotts in our story. Instead, bless what is and break it open. Model that blessing and breaking open until it becomes contagious in a crowd, until it becomes a new reflex. Practice holy and whole enoughness. Even if it’s just one day each week. It is enough to break the stubborn cycle of our 24/7 allegiance to the powers that are and be broken open to the powers that first created us and continue to create what just might be possible if we are willing to pause, to practice the kind Sabbath of which we are commanded. May it be so. May we be so willing.