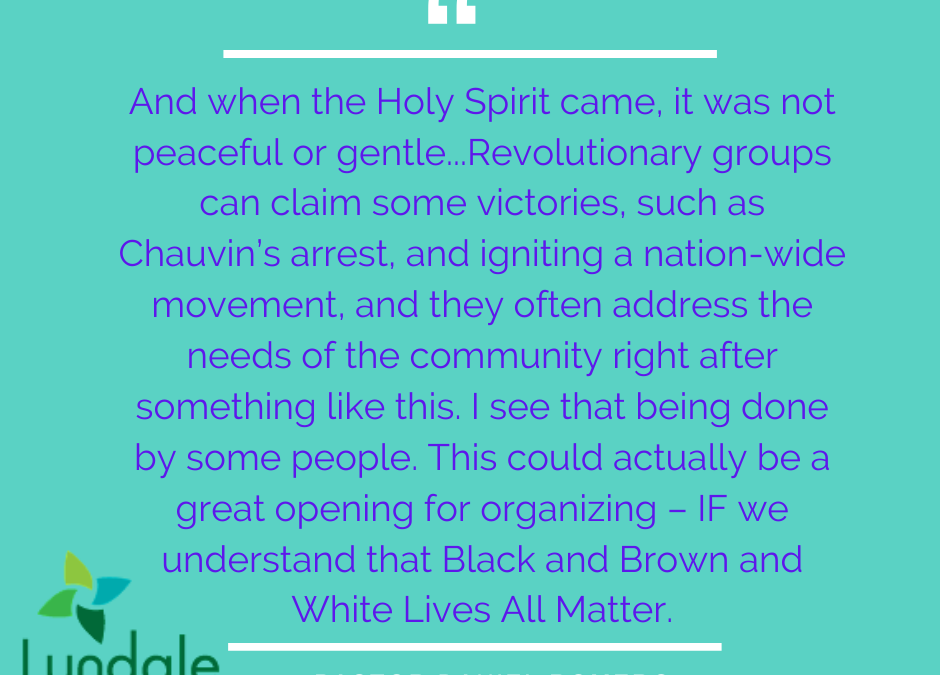 This morning, let’s start with the academics, the definitions and connections in the text.

Many understand that the Greek word Pentecostis comes from the Greek word for the number “50” because a feast occurred 50 days after the first Sunday after Passover. It was the OT’s Feast of Weeks, a late spring harvest festival described in Leviticus 23:15-16 which says:

This festival celebrates the descent of the Holy Spirit on the disciples of Jesus after his Ascension into heaven, held on the seventh Sunday after Easter.

The Pentecost is also when a small crowd gathered in a room on the highest floor of a house in Jerusalem to wait for the manifestation of the promise Jesus made before his ascension. The promise was that the followers of Jesus would be baptized, not with water, but with the Holy Spirit.

The baptism of the Holy Spirit would give people the power to be witnesses of Jesus, in word or deed, in Jerusalem, Judea, Samaria, and to the ends of the earth. This sending into the world is connected to Luke chapter 10. Hear these words through the lens of this week’s tensions. Luke says, in part:

Now go, and remember that I am sending you out as lambs among wolves. 4 Don’t take any money with you, nor a traveler’s bag, nor an extra pair of sandals. 5 “When you encounter them, first say, ‘May God’s peace be with you. 6 If they are peaceful, the blessing will stand; if they are not, the blessing will return to you.

The crowd in the book of Acts were about 110 people. They included disciples, women, including Jesus’ mother Mary, Jesus’ brothers, and other followers. Very often, the presence of women at Pentecost gets lost in the masculine/male language. Women who had been healed of evil spirits and sicknesses, such as Mary Magdalene, Joanna, Susanna, and others who not only followed Jesus, but they supported Jesus’ work using their own resources.

Tens of thousands are gathering in Minneapolis, from all over the country. My friends from Chicago and Ferguson, Missouri are here, and yesterday at Hennepin County District Attorney Mike Freeman’s house, we met families from California, Detroit and Georgia.

We have heard from Twin City Mayors and from Governor Walz that “outside agitators” are taking over the city. But after several nights out on the streets, I can report that there were indeed outside agitators at the protests I’ve attended. Three Black women from California whose children were killed by the police there. Fred Hampton Jr. from Chicago, whose father, Black Panther Party leader Fred Hampton, was killed in 1969 by the Chicago police. When they saw the video of George Floyd, they felt compelled to come to Minnesota, to be here with us and tell us their stories. These are outside agitators that we welcome.

Together, we talked about the fact that our capitalist economy has failed to deliver lives of decency and dignity to the poor and African Americans. And our legal system, the criminal justice system, has not delivered rights and liberty to those Marguerite last week called “the last, the lost and the least.” In the meantime, a Minnesota State Senator posted this:

To the activists who are risking your lives for change, to the business owners in the area, to my neighbors, to my son and his friends, to all the people protesting: I am listening. I see you. I’m also in pain and I don’t want you to get hurt. We’ll work around the clock to find solutions, together, I promise you!

This is someone who has been in office for 5 terms, issuing a promise that has been unkept for 13 years. The system cannot reform itself, rather, the changes we seek must come from the people, not from the system’s oppressor class. This indicts the entire rotten infrastructure of the Empire that we live in and the arrest of Derrick Chauvin and the absence of Donald Trump are not enough.

George Floyd was murdered by Derrick Chauvin, a police officer with dozens of excessive force complaints on his record. Before he killed George Floyd, Chauvin shot and wounded one man and was involved in the killing of another.

Tou Thao was the MPD officer who stood watch while Chauvin killed George. Thao and another officer beat a man who was walking with his 9 month pregnant girlfriend. After the man was treated for injuries they inflicted, Thao and the other officer dragged the man out of the hospital who was only wearing a bloody t-shirt and underwear.

Pentecost tells the story of when fire came to earth and turned the world upside down. And we are praying for peace. The Governor and Twin Cities Mayors want protestors to be peaceful but never once did they call for MPD or the National Guard to be peaceful. This is what the Prophet Jeremiah calls a “superficial peace.”

They dress the wounds of my people as though it were not serious. ‘Peace Peace’ they say, when there is no peace.

Jeremiah warns of what happens when a superficial peace is manifested: “So, they will fall among the fallen; they will be brought down when I punish them, Says the Lord.”

The Lord told his disciples before he left the world that when the Spirit came they would be his witnesses. And that is precisely what happened. Pentecost provided the means by which the church would bear witness to Jesus Christ across the earth; Pentecost made the church and all the Christians in her the means of God’s grace to the world.

The people were confused, amazed, perplexed and perhaps some were fearful of all of the signs and omens. Some mocked the happenings as a scene caused by people drunk on new wine. Is it White supremacists? Is it out of town people? Is it cartels? Luke then asks, “What does this mean?”

The signs that I have seen during my time on the streets at the 3rd Precinct, at the 5th precinct, and on the Lake Street bridge last night are very clear. This movement for justice is being led by mostly young people of color, not anarchists or cartels. Those people of color are pissed at how they and their communities have been treated and I go with them because I’m pissed too. My ears are still ringing from the sound grenade on Friday night and I can’t get the tear gas out of my clothes.

This one riot, or urban rebellion, fight back against the cops, or whatever you want to call it, will probably do more to move the wheels in city hall than all the peaceful marches we’ve had in the last years combined. Even in the worst rioting in the US, the numbers of dead/injured didn’t touch what the US police-state kills on a daily basis, only in a more orderly fashion. That is not a statement on what is a correct or not tactic, just an observation. For awhile the cops lost control and people saw they had power.

Riots are usually uncontrollable by any group or leader and they usually happen in poor neighborhoods because that’s where poor and frustrated people live and where they feel safest retreating into.

There is no way to disrupt the Empire’s capitalist system that isn’t going to disrupt everybody. If we block ICE vans from deporting people from the Whipple building at Ft. Snelling, as we have in the past and we surely will again, we are inevitably blocking some good people from getting to their asylum hearing.

Revolutionary groups can claim some victories, such as Chauvin’s arrest, and igniting a nation wide movement, and they often address the needs of the community right after something like this. I see that being done by some people. This could actually be a great opening for organizing – IF we understand that Black and Brown and White Lives All Matter.

Lyndale, this is not a peaceful land we’ve found ourselves in. As we say each time we gather for worship, this place was founded on burning Dakota lives and slavery, and it is sustained by the economic/policing oppression of those same people and Latinx labor. We’ve just seen the power slightly on the other side in the last few nights.

14 What good is it, my friends if someone says they have faith but does not have works? Can that faith save them? 15 If a person is poorly clothed and lacking in daily food, 16 and one of you says to them, “Go in peace, be warmed and filled,” without giving them the things needed for the body, what good[a] is that?

(This sermon was inspired by thousands of people, including my friends Jim Bear, Giselda, and Bruce)